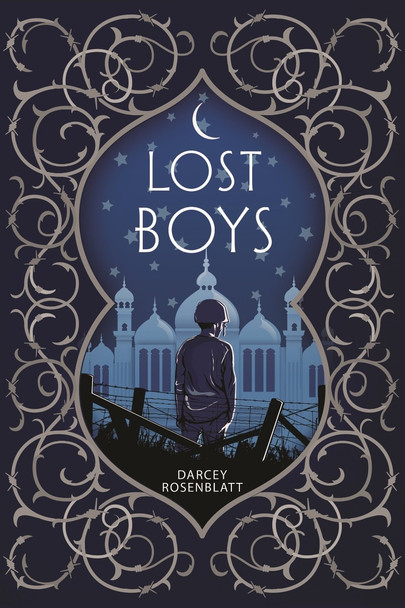 Based on historical events, this unforgettable and inspiring tale for middle-grade readers is about a young boy torn from the only life he’s ever known and held captive as a prisoner of war.

In 1982, twelve-year-old Reza has no interest in joining Iran’s war effort. But in the wake of a tragedy and at his mother’s urging, he decides to enlist, assured by the authorities that he will achieve paradise should he die in service to his country.

War does not bring the glory the boys of Iran have been promised, and Reza soon finds himself held in a prisoner-of-war camp in Iraq, where the guards not only threaten violence―they act upon it. Will Reza make it out alive? And if he does, will he even have a home to return to?

In this unforgettable tale of friendship and survival against the odds, Reza finds solace through music and forges his own path, wherever that might take him. Lost Boys is a stunning debut from Darcey Rosenblatt. It is perfect for readers interested in current events, history, and the Middle East.

“In Rosenblatt’s ambitious debut novel, Reza, a 12-year-old Iranian boy, clings to friendship and his love of music as the Iran-Iraq War tears his world apart. . . . Reza’s story is compelling . . . .” ―Kirkus Reviews

“This hard-hitting first novel opens in Iran in 1982 during the Ayatollah Khomeini’s oppressive rule and that nation’s war with Iraq. . . . The larger political context becomes personal when a devastating public rejection of Reza and his fellow survivors by Iran leaves the boys without a country. . . . [T]he resilience of Rosenblatt’s protagonist strikes a strong chord.” ―Publishers Weekly

The book, Lost Boys [Bulk, Wholesale, Quantity] ISBN# 9781250158826 in Paperback by Darcey Rosenblatt may be ordered in bulk quantities. Minimum starts at 25 copies. Availability based on publisher status and quantity being ordered.
View AllClose

MSRP:
Now:
As low as
Was:
In alternating chapters John Bul Dau and his wife Martha Arual Akech tell of their African Childhoods and show African life and values at their best, at the same time providing searing accounts of...

The Lost Boy: A Foster Child's Search for the Love of a Family

MSRP:
Now:
As low as
Was:
Imagine a young boy who has never had a loving home. His only possesions are the old, torn clothes he carries in a paper bag. The only world he knows is one of isolation and fear. Although others had...

The Lost Boys of Sudan: An American Story of the Refugee Experience (Revised)

MSRP:
Now:
As low as
Was:
In 2000 the United States began accepting 3,800 refugees from one of Africa’s longest civil wars. They were just some of the thousands of young men, known as “Lost Boys,” who had been orphaned or...

Brothers in Hope: The Story of the Lost Boys of Sudan [Hardcover]

MSRP:
Now:
As low as
Was:
A young boy unites with thousands of other orphaned boys to walk to safety in a refugee camp in another country, after war destroys their villages in southern Sudan. Based on true events.... The...

MSRP:
Now:
As low as
Was:
"My name is King. I am a dog. I am also a detective. King has a very big mystery to solve. His family is missing, and he's been put in the P-O-U-N-D. Why doesn't his beloved human (Kayla) come to...

Coaching for Performance: The Principles and Practice of Coaching and Leadership (5TH ed.)

MSRP:
Now:
As low as
Was:
Coaching for Performance is the definitive book for coaches, leaders, talent managers and professionals around the world. An international bestseller, featuring the influential GROW model, this book...

MSRP:
Now:
As low as
Was:
Ann Dixon's delightful story, illustrated with enchanting, colorful linocuts by Evon Zerbetz, presents a playful look at the secret world of woodland creatures. In tender and playful detail,...

MSRP:
Now:
As low as
Was:
With the adventures set forth in the first books now behind them, Kingdom Keepers 3: Disney In Shadow follows the five teens, Finn, Philby, Willa, Charlene, and Maybeck as they search to find Wayne,...

Recycle!: A Handbook for Kids [Paperback]

MSRP:
Now:
As low as
Was:
Explains the process of recycling from start to finish and discusses what happens to paper, glass, aluminum cans, and plastic when they are recycled into new productsThe book, Recycle! : A Handbook...

MSRP:
Now:
As low as
Was:
A classic tale of the unthinkable--a nuclear holocaust in the United States--Frank's gripping story of survivors in a small Florida town includes a new Foreword by BrinThe book, Alas, Babylon ISBN...