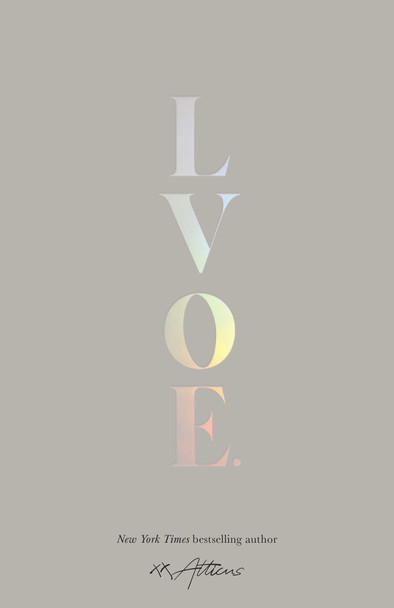 This title is available for pre-order and will be processed on Nov 1st 2022 for shipment.

Even if you’ve never heard his name, you’ve probably met someone with his words tattooed on their skin or heard them sung at a music concert. Atticus, the young, anonymous NYT Best Selling Author, has taken the world by storm with his beautiful poetry and powerful, simple themes of love and strength of the human spirit. Dubbed “The #1 Person to Follow” by Teen Vogue. And “The World’s Most Tattoo-able Poet” by Galore Magazine, he has been followed, quoted, and shared by some of the world’s top superstars, from Karlie Kloss to Shawn Mendes, Emma Roberts, and Alicia Keys. His words have been tattooed by tens of thousands of his avid followers. He has been featured in Time Magazine, Elle, The Guardian, Fast Company, Publishers Weekly, The New York Times, and The Wall Street Journal. He has worked with Kygo, Maroon 5, Absolute Vodka, Stance Socks, Target, Urban Outfitters, and Refinery 29. In 2020, Atticus launched his own brand of wine, aptly called Lost Poet, which has become the #1 selling wine on Winc.com. All while wearing a mask and keeping his identity a secret. In his words, “sending love from the shadows.”

His fourth poetry collection, LVOE., is a study into himself. Using his instantly recognizable lyrical style, gorgeous black-and-white illustrations, and relatable themes, Atticus will once again dazzle readers, inspiring them to also look within. This collection will feature all-new poems, each paired with beautiful sketches that bring the words alive from the page.

An exploration of self-love, meditation, meaning, loss, and romance, LVOE. is a look forward, a look backward, but most importantly a look inward to the often confusing yet hopeful human experience.

The book, Lvoe: Poems, Epigrams & Aphorisms [Bulk, Wholesale, Quantity] ISBN# 9781524873837 in Paperback by Atticus may be ordered in bulk quantities. Minimum starts at 25 copies. Availability based on publisher status and quantity being ordered.
View AllClose

MSRP:
Now:
As low as
Was:
The stunning follow-up volume to her 2007 Pulitzer Prizewinning Native Guard, by America's new Poet Laureate Natasha Trethewey's poems are at once deeply personal and historicalexploring her own...

The Poem of the Cid

MSRP:
Now:
As low as
Was:
One of the finest of epic poems, and the only one to have survived from medieval Spain, The Poem of the Cid recounts the adventures of the warlord and nobleman Rodrigo Dmaz de Vivar 'Mio Cid'. A...

MSRP:
Now:
As low as
Was:
It has often been said that love, both sacred and profane, is the only true subject of the lyric poem. Nothing better justifies this claim than the splendid poems in this volume, which range from the...

MSRP:
Now:
As low as
Was:
“Blackacre” is a centuries-old legal fiction—a placeholder name for a hypothetical estate. Treacherously lush or alluringly bleak, these poems reframe their subjects as landscape, as legacy—a...

MSRP:
Now:
As low as
Was:
WINNER OF THE 2021 PULITZER PRIZE IN POETRY FINALIST FOR THE 2020 NATIONAL BOOK AWARD FOR POETRY Natalie Diaz’s highly anticipated follow-up to When My Brother Was an Aztec, winner of an...

Blind Spot: The Global Rise of Unhappiness and How Leaders Missed It [Hardcover]

MSRP:
Now:
As low as
Was:
The rising unhappiness that leaders didn't see That's because while leaders pay close attention to measures like GDP or unemployment, almost none of them track their citizens' wellbeing. The...

MSRP:
Now:
As low as
Was:
Move closer to God one day at a time by reading the Psalms and practicing prayer in ways you may not have imagined before.This is a prayer book for every day of the year for people who don't usually...

MSRP:
Now:
As low as
Was:
“Masterfully flips the first installment on its head... James makes the mythic tantalizingly real.’” —Esquire "Even more brilliant than the first.” —Buzzfeed An Instant New York Times...

How to Be Perfect: The Correct Answer to Every Moral Question

MSRP:
Now:
As low as
Was:
From the creator of The Good Place and the cocreator of Parks and Recreation, a hilarious, thought-provoking guide to living an ethical life, drawing on 2,400 years of deep thinking from around the...

Fletcher and the Falling Leaves

MSRP:
Now:
As low as
Was:
Celebrate fall with the sweet and charming Fletcher the fox! As the leaves fall from his favorite tree, Fletcher worries that something is terribly wrong. But then winter comes, and with it a...

Philadelphia and the State of Pennsylvania: Cool Stuff Every Kid Should Know (Arcadia Kids)

MSRP:
Now:
As low as
Was:
DO YOU KNOW…WHAT big celebration drew nine million people to Philadelphia--in 1875? (Hint: It was another "Philly first.") WHICH invention dedicated in 1946 at the University of Pennsylvania...

The Paper Boat: A Refugee Story

MSRP:
Now:
As low as
Was:
Named a best picture book of 2020 by Kirkus, School Library Journal, Booklist, New York Public Library, the Globe and Mail, CBC, and the Bulletin of the Center for Children’s Books ― a heartfelt and...

MSRP:
Now:
As low as
Was:
The most popular, provocative, and unforgettable essays from the past fifteen years of the New York Times “Modern Love” column—including stories from the anthology series starring Tina Fey, Andy...