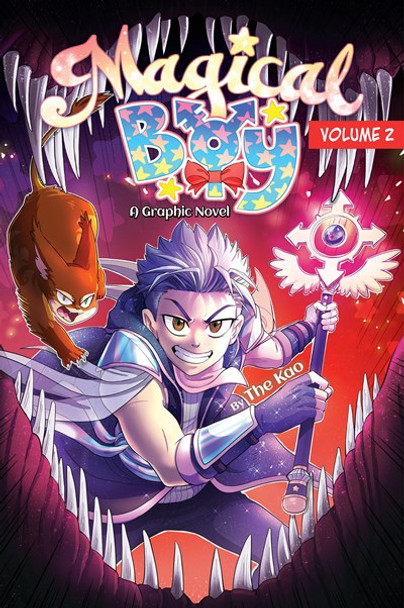 Although he was assigned female at birth, Max is your average trans man trying to get through high school as himself. But on top of classes, crushes, and coming out, Max's life is turned upside down when his mom reveals an eons old family secret: he's descended from a long line of Magical Girls tasked with defending humanity from a dark, ancient evil!

For decades, Devoid and his minions have been sealed away, with each generation's magical girl protecting the seal and our world. But as the millennia have passed, more and more cracks have appeared in the weakening seal. Now, the seal is open, evil is pouring into our world, and only Max can defeat it.

A hilarious and heartfelt riff on the magical girl genre made popular by teen manga series, Magical Boy is a one-of-a-kind fantasy series that comic readers of all ages will love.

The book, Magical Boy Volume 2: A Graphic Novel [Bulk, Wholesale, Quantity] ISBN# 9781338815979 in Hardcover by The Kao may be ordered in bulk quantities. Minimum starts at 25 copies. Availability based on publisher status and quantity being ordered.
View AllClose

MSRP:
Now:
As low as
Was:
A New York Times bestseller! Act is the funny and honest follow-up to the middle school graphic novel sensations Click and Camp. Perfect for fans of Raina Telgemeier, Shannon Hale, and Victoria...

The Odyssey (The Graphic Novel) [Paperback]

MSRP:
Now:
As low as
Was:
With bold imagery and an ear tuned to the music of Homer’s epic poem, Gareth Hinds reinterprets the ancient classic as it’s never been told before. "Gareth Hinds brings THE ODYSSEY to life in a...

MSRP:
Now:
As low as
Was:
Kwame Alexander's NYT Bestseller and Newbery Medal winning The Crossover is vividly brought to life as a graphic novel with stunning illustrations by star talent Dawud Anyabwile. New York Times...

MSRP:
Now:
As low as
Was:
This exhilarating graphic-novel edition of an ancient classic honors the spirit of the original as it attracts modern readers. The epic tale of the great warrior Beowulf has thrilled readers through...

MSRP:
Now:
As low as
Was:
Although he was assigned female at birth, Max is your average trans man trying to get through high school as himself. But on top of classes, crushes, and coming out, Max's life is turned upside down...

Perspective!: The Secret to Student Motivation and Success

MSRP:
Now:
As low as
Was:
Jumpstart Motivation with a Shift in Perspective. Motivational speaker Tommie Mabry builds from personal experiences as a child labeled “at risk” to promote empathy and understanding in...

Those Kids from Fawn Creek

MSRP:
Now:
As low as
Was:
Every day in Fawn Creek, Louisiana, is exactly the same—until Orchid Mason arrives. From Erin Entrada Kelly, the winner of the Newbery Medal for Hello, Universe and a Newbery Honor for We Dream of...

A Killer by Design: Murderers, Mindhunters, and My Quest to Decipher the Criminal Mind

MSRP:
Now:
As low as
Was:
A vivid behind-the-scenes look into the creation of the FBI's Behavioral Science Unit and the evolution of criminal profiling, written by the pioneering forensic nurse who transformed the way the FBI...

America's Heroes: Stories of Courage and Hope from the Frontlines of the Pandemic

MSRP:
Now:
As low as
Was:
In the midst of a period that will leave America forever changed, individuals from all walks of life have stood up to help. First responders and medical professionals on the frontlines. Grocery store...

When Sharks Attack with Kindness

MSRP:
Now:
As low as
Was:
Cute, clever, and comically ingenious, Andrés Colmenares’ popular shark comics are a sweet, sincere tonic for these anxious, troubled times. This hardcover collection features the cute, uplifting...

Get Out of That Pit: Straight Talk about God's Deliverance

MSRP:
Now:
As low as
Was:
From her first breath of fresh air beyond the pit, it has never been enough for Beth Moore to be free. This best-selling author and Bible teacher who has opened the riches of Scripture to millions...

What Can You Do with a Rebozo?: ?Qu? Puedes Hacer con un Rebozo?

MSRP:
Now:
As low as
Was:
A cradle for baby, a superhero's cape, a warm blanket on a cool night--there are so many things you can do with a rebozo. Through the eyes of a young girl, readers are introduced to the traditional...

MSRP:
Now:
As low as
Was:
Milla and Honey have been best friends since forever. Milla envies Honey’s confidence, her charisma, and her big, chaotic family—especially when they provide a welcome escape from Milla’s own...