Make It Reality: Create Your Opportunity, Own Your Success 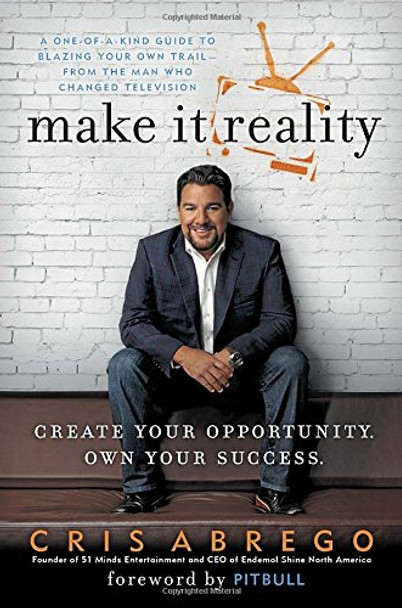 Make It Reality: Create Your Opportunity, Own Your Success

The creator and producer of several mega-hit television series, including The Surreal Life, Flavor of Love, Rock of Love, and Charm School, shares his incredible journey of making it to the top—and how you can too. “No one paves the road for you. You have to create your own path. If you believe in your dreams, embrace what makes you different, and bet on yourself, the destination will be greater than you ever imagined.”—Cris Abrego From carrying camera gear on the sets of MTV’s Road Rules, to pioneering the celebreality genre by creating such breakout hits as The Surreal Life and The Flavor of Love, and now as one of today’s most prominent figures in the television industry—Cris Abrego’s career has been nothing short of extraordinary. As a young boy growing up in L.A., Abrego spent his formative years glued to his family’s TV set, forging his dream of one day working in television. With unrelenting drive, he overcame countless obstacles to build his own reality TV production company in his garage, which, by his mid-thirties, he sold to one of the world’s largest television production companies, before being tapped as their co-CEO. In Make It Reality, Abrego provides practical and motivating lessons collected from almost twenty years on the frontlines of television, including: how to visualize and your goals and work tirelessly to attain them; when to take risks and push boundaries; and how to continually raise the bar for yourself and realize there are no limits on what can be achieved. Success isn’t about your pedigree or your connections: it’s about vision, leadership, and courage. Abrego’s story is unforgettable, full of heart, and inspiring to anyone seeking to transcend all obstacles and achieve true success. Foreword by Pitbull

The book, Make It Reality: Create Your Opportunity, Own Your Success [Bulk, Wholesale, Quantity] ISBN# 9781101990360 in Hardcover by Cris Abrego may be ordered in bulk quantities. Minimum starts at 25 copies. Availability based on publisher status and quantity being ordered.
View AllClose

Make Today Count: The Secret of Your Success Is Determined by Your Daily Agenda

MSRP:
Now:
As low as
Was:
Drawing from the text of the Business Week bestseller Today Matters , this condensed, revised edition boils down John C. Maxwell's 12 daily practices to their very essence, giving maximum impact in...

The Big Stretch: 90 Days to Expand Your Dreams, Crush Your Goals, and Create Your Own Success

MSRP:
Now:
As low as
Was:
From concept to reality in just 90 Days―The Big Stretch is a proven program for making your personal and professional dreams come true The Big Stretch delivers a four-tiered self-evaluation and...

The Power of Agency: The 7 Principles to Conquer Obstacles, Make Effective Decisions, and Create a Life on Your Own Terms [Hardcover]

MSRP:
Now:
As low as
Was:
**A 2019 OWL AWARD SHORTLIST WINNER IN THE HEALTH & WELLNESS CATEGORY**From two eminent clinical psychologists, how to access your personal agency and adapt to living the life you choose. Agency

MSRP:
Now:
As low as
Was:
*Named a Best Business Book of 2020 by Fortune and Bloomberg* Full of empowering wisdom from one of Silicon Valley's first female African American CEOs, this inspiring leadership book offers a...

Crab and Snail: The Invisible Whale

MSRP:
Now:
As low as
Was:
Join Crab and Snail in the surf zone, where they think deep thoughts and have unforgettable seaside adventures, in this graphic early reader series debut by New York Times bestselling author Beth...

For Whom the Bell Tolls

MSRP:
Now:
As low as
Was:
In 1937 Ernest Hemingway traveled to Spain to cover the civil war there for the North American Newspaper Alliance. Three years later he completed the greatest novel to emerge from "the good fight,"...

Courage to Soar: A Body in Motion, a Life in Balance

MSRP:
Now:
As low as
Was:
Simone Biles’ entrance into the world of gymnastics may have started on a daycare field trip in her hometown of Spring, Texas, but her God-given talent, passion, and perseverance have made her one of...

MSRP:
Now:
As low as
Was:
**2020 OWL AWARD ELEMENTARY CATEGORY WINNER**From the author of the acclaimed Roll with It comes a moving novel about a girl with a sensory processing disorder who has to find her own voice after her...

The Gift of a Happy Mother: Letting Go of Perfection and Embracing Everyday Joy

MSRP:
Now:
As low as
Was:
A supportive guide that gives busy moms permission to care for themselves, from a popular parenting blogger with one million Facebook followers "Would you rather have a perfect mom, or a happy...

How Far Can You Go?: My 25-Year Quest to Walk Again

MSRP:
Now:
As low as
Was:
An inspirational memoir by a man who became an elite wheelchair athlete after suffering a catastrophic spinal injury and who finally walked again 25 years after his accident. After two years of...

MSRP:
Now:
As low as
Was:
It's hard being a rat with a silver palate—just ask Remy, the star of Disney / Pixar's newest animated film, Ratatouille! While the other rats of Paris are happy eating trash, Remy dreams of becoming...