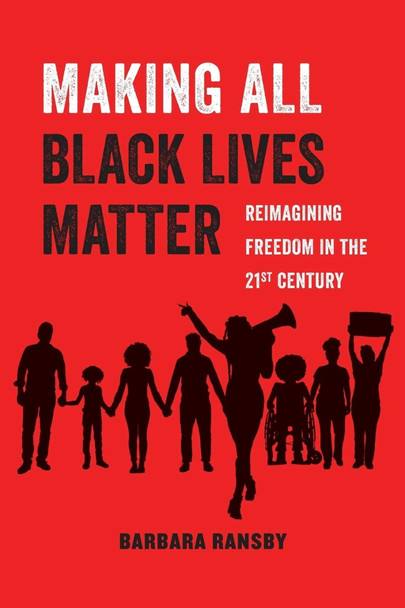 MSRP:
Now: List Price $18.95
Was:
— You save
Paperback
This product qualifies for FREE US Ground Shipping on orders over $100.

“This perceptive resource on radical black liberation movements in the 21st century can inform anyone wanting to better understand . . . how to make social change.”—Publishers Weekly

The breadth and impact of Black Lives Matter in the United States has been extraordinary. Between 2012 and 2016, thousands of people marched, rallied, held vigils, and engaged in direct actions to protest and draw attention to state and vigilante violence against Black people. What began as outrage over the 2012 murder of Trayvon Martin and the exoneration of his killer, and accelerated during the Ferguson uprising of 2014, has evolved into a resurgent Black Freedom Movement, which includes a network of more than fifty organizations working together under the rubric of the Movement for Black Lives coalition. Employing a range of creative tactics and embracing group-centered leadership models, these visionary young organizers, many of them women, and many of them queer, are not only calling for an end to police violence, but demanding racial justice, gender justice, and systemic change.

In Making All Black Lives Matter, award-winning historian and longtime activist Barbara Ransby outlines the scope and genealogy of this movement, documenting its roots in Black feminist politics and situating it squarely in a Black radical tradition, one that is anticapitalist, internationalist, and focused on some of the most marginalized members of the Black community. From the perspective of a participant-observer, Ransby maps the movement, profiles many of its lesser-known leaders, measures its impact, outlines its challenges, and looks toward its future.

The book, Making All Black Lives Matter, Volume 6: Reimagining Freedom in the Twenty-First Century (American Studies Now: Critical Histories of the Present #6) [Bulk, Wholesale, Quantity] ISBN# 9780520292710 in Paperback by Barbara Ransby may be ordered in bulk quantities. Minimum starts at 25 copies. Availability based on publisher status and quantity being ordered.
View AllClose

The Ripple Effect: The Fate of Freshwater in the Twenty-First Century

MSRP:
Now:
As low as
Was:
From the bestselling coauthor with Julia Child of My Life in France “a balanced and insightful assessment of what could emerge as the dominant issue in decades ahead” (Associated Press)—the fate of...

All Different Now: Juneteenth, the First Day of Freedom

MSRP:
Now:
As low as
Was:
In 1865, members of a family start their day as slaves, working in a Texas cotton field, and end it celebrating their freedom on what came to be known as Juneteenth.... The book, All Different Now:...

MSRP:
Now:
As low as
Was:
The end of retirement? From the beet fields of North Dakota to the National Forest campgrounds of California to Amazon’s CamperForce program in Texas, employers have discovered a new, low-cost labor...

The World Is Flat: A Brief History of the Twenty-First Century [Paperback]

MSRP:
Now:
As low as
Was:
A New Edition of the Phenomenal #1 Bestseller "One mark of a great book is that it makes you see things in a new way, and Mr. Friedman certainly succeeds in that goal," the Nobel laureate Joseph E...

Capital in the Twenty-First Century

MSRP:
Now:
As low as
Was:
What are the grand dynamics that drive the accumulation and distribution of capital? Questions about the long-term evolution of inequality, the concentration of wealth, and the prospects for economic...

The Perfectionist's Handbook: Take Risks, Invite Criticism, and Make the Most of Your Mistakes [Hardcover]

MSRP:
Now:
As low as
Was:
Praise for The Perfectionists Handbook "Dr. Szymanski offers the reader both research-supported and user-friendly techniques that can enhance productivity without compromising the pursuit of...

MSRP:
Now:
As low as
Was:
A classic Amelia Bedelia story is now an I Can Read Book, and in full color too! With new illustrations based on the original art of Fritz Siebel, this laugh-out-loud favorite comes to life as the...

MSRP:
Now:
As low as
Was:
**A 2020 OWL AWARD LONGLIST WINNER IN THE LEADERSHIP CATEGORY**Shay was still angry but shrugged nonchalantly as if to say, it’s not that big of a deal. “So, what am I wrong about?”...

MSRP:
Now:
As low as
Was:
For decades we’ve been studying, experimenting with, and wrangling over different approaches to improving public education, and there’s still little consensus on what works, and what to do. The one...

The Economics Book: From Xenophon to Cryptocurrency, 250 Milestones in the History of Economics ( Sterling Milestones )

MSRP:
Now:
As low as
Was:
This beautiful, authoritative volume in the popular Milestones series looks at the vital intersection among business, finance, and money. From the philosophical dialogues of Ancient Greece and the...