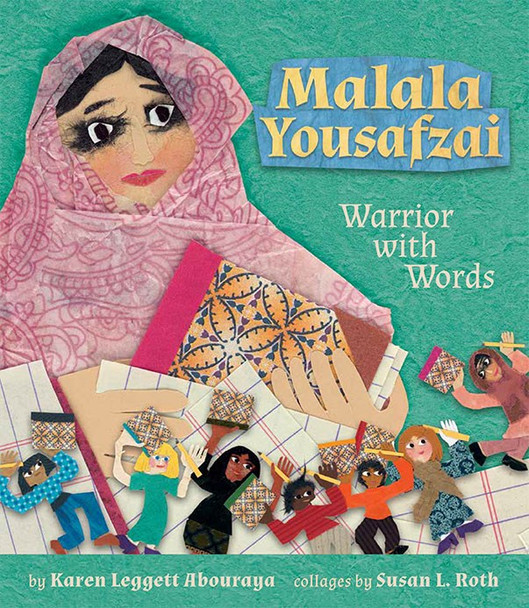 Growing up in the Swat Valley of Pakistan, Malala Yousafzai loved books and school. But in 2009, the Taliban came to power and closed all schools for girls. Malala, just eleven years old, began to speak and blog about the right of all children to receive an education.

Soon fighting broke out and Malala's family fled the Swat Valley. After the fighting ceased, they returned home, and Malala continued to speak out. That's when she was shot by a Taliban gunman, but her life-threatening injury only strengthened Malala's resolve. In 2013, just nine months after being attacked, Malala addressed the United Nations about the right of every child to receive an education, and in 2014, she was awarded the Nobel Peace Prize. At age seventeen, she was the youngest person ever to receive this honor.

This book is more than a biography of a brave, outspoken girl who continues to fight for the millions of children worldwide who are not able to go to school. It is also a testament to the power of education to change the world for girls and boys everywhere.

The book, Malala Yousafzai: Warrior with Words [Bulk, Wholesale, Quantity] ISBN# 9781620147993 in Paperback by Karen Leggett Abouraya;Susan L. Roth (Illustrated by) may be ordered in bulk quantities. Minimum starts at 25 copies. Availability based on publisher status and quantity being ordered.
View AllClose

Malala: My Story of Standing Up for Girls' Rights

MSRP:
Now: $6.99
Was:
A chapter book edition of Nobel Peace Prize winner Malala Yousafzai's bestselling story of courageously standing up for girls' education. Malala's memoir of a remarkable teenage girl who risked her...

Who Is Malala Yousafzai?

MSRP:
Now: $5.99
Was:
Malala Yousafzai was a girl who loved to learn but was told that girls would no longer be allowed to go to school. She wrote a blog that called attention to what was happening in her beautiful corner...

MSRP:
Now: $17.99
Was:
Malala Yousafzai stood up to the Taliban and fought for the right for all girls to receive an education. When she was just fifteen-years old, the Taliban attempted to kill Malala, but even this did...

MSRP:
Now: $4.99
Was:
When twelve-year-old Jake Forrest's mother gets a job in a new city, everything changes. He has to move away from the Iroquois reservation he's lived on his entire life--away from his aunt and uncle,...

MSRP:
Now: $10.99
Was:
This intriguing biography introduces students to Malala Yousafzai, the youngest recipient of the Nobel Peace Prize and a strong advocate for womens rights to education. This biography engages...

MSRP:
Now: $3.95
Was:
...well orated by reader George Vafiadis. The language and sentiment are not as outmoded as some listeners might expect and it definitely feels patriotic to hear again the fundamentals of America's...

MSRP:
Now: $8.99
Was:
Miguel has dreamed of joining his parents in California since the day they left him behind in Mexico six years, eleven months, and twelve days ago. On the morning of his fifteenth birthday, Miguel's...

Mindfulness at Work: Turn Your Job Into a Gateway to Joy, Contentment and Stress-Free Living (Mindful Living)

The Telling: How Judaism's Essential Book Reveals the Meaning of Life

MSRP:
Now: $29.99
Was:
Life changing wisdom from one of Judaism’s most powerful texts. The Haggadah, which can be found in Jewish homes around the world, has guided Jewish families and friends through Pesach...

MSRP:
Now: $27.00
Was:
A game-changing model for giving effective feedback to peers, employees, or even your boss--without offending or demotivating. How are you supposed to tell someone that they're not meeting...

One Hundred Years of Solitude [Paperback]

MSRP:
Now: $16.99
Was:
A "fascinating and terrifying" memoir of one woman's extraordinary effort to save her husband's life (Scientific American) -- and the discovery of a forgotten cure that has the potential to save...

MSRP:
Now: $28.00
Was:
A ground-breaking and brave inside reckoning with the nexus of prison and profit in America: in one Louisiana prison and over the course of our country's history. In 2014, Shane Bauer was hired for...