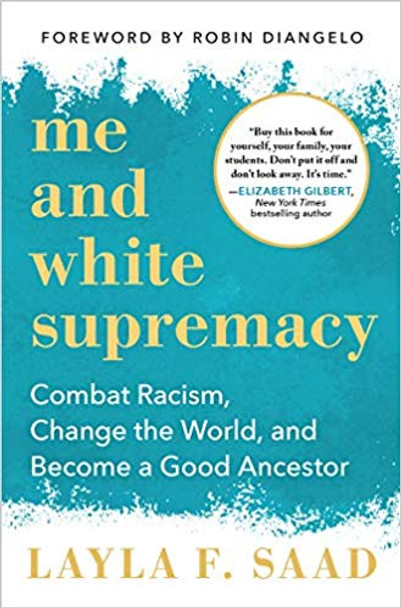 "Layla Saad is one of the most important and valuable teachers we have right now on the subject of white supremacy and racial injustice."―New York Times bestselling author Elizabeth Gilbert

Based on the viral Instagram challenge that captivated participants worldwide, Me and White Supremacy takes readers on a 28-day journey of how to dismantle the privilege within themselves so that they can stop (often unconsciously) inflicting damage on people of color, and in turn, help other white people do better, too.

When Layla Saad began an Instagram challenge called #meandwhitesupremacy, she never predicted it would spread as widely as it did. She encouraged people to own up and share their racist behaviors, big and small. She was looking for truth, and she got it. Thousands of people participated in the challenge, and nearly 100,000 people downloaded the Me and White Supremacy Workbook.

Updated and expanded from the original workbook, Me and White Supremacy,takes the work deeper by adding more historical and cultural contexts, sharing moving stories and anecdotes, and including expanded definitions, examples, and further resources.

The book, Me and White Supremacy: Combat Racism, Change the World, and Become a Good Ancestor [Bulk, Wholesale, Quantity] ISBN# 9781728209807 in Hardcover by Layla Saad, Robin DiAngelo may be ordered in bulk quantities. Minimum starts at 25 copies. Availability based on publisher status and quantity being ordered
View AllClose

MSRP:
Now:
As low as
Was:
One of the most eminent scholars and writers on men and masculinity and the author of the critically acclaimed Manhood in America turns his attention to the culture of guys, aged 16 to 26: their...

MSRP:
Now:
As low as
Was:
**A 2020 OWL AWARD SHORTLIST WINNER IN THE RELIGION CATEGORY**Drawing on history, public opinion surveys, and personal experience, Robert P. Jones delivers a provocative examination of the unholy...

Believe Me: How Trusting Women Can Change the World

MSRP:
Now:
As low as
Was:
What would happen if we believed women? A groundbreaking anthology offers a potent rallying cry and theory of change. Harvey Weinstein. Brett Kavanaugh. Jeffrey Epstein. Donald Trump. The most...

The Roots of Racism: The Politics of White Supremacy in the US and Europe

MSRP:
Now:
As low as
Was:
Racism has deep roots in both the United States and Europe. This important book examines the past, present, and future of racist ideas and politics. It describes how policies have developed over a...

Tomorrow, the World: The Birth of U.S. Global Supremacy

MSRP:
Now:
As low as
Was:
For most of its history, the United States avoided making political and military commitments that would entangle it in power politics. Then, suddenly, it conceived a new role for itself as an armed...

The Little Engine That Could (Little Golden Book)

MSRP:
Now:
As low as
Was:
The 90th anniversary celebration continues with the all-time classic story now available as an 8x8 with 25+ stickers! Everyone loves The Little Engine That Could, the classic tale of the...

MSRP:
Now:
As low as
Was:
`-Pictures are labeled in English and Spanish. -Companions to best selling series with over 2 million copies in print.... The book, Colores Colors: Spanish/English Bilingual [Bulk, Wholesale,...

Clap When You Land [Hardcover]

MSRP:
Now:
As low as
Was:
In a novel-in-verse that brims with grief and love, National Book Award-winning and New York Times bestselling author Elizabeth Acevedo writes about the devastation of loss, the difficulty of...

Promise Me You'll Shoot Yourself

MSRP:
Now:
As low as
Was:
Named a Best History Book of 2019 by The Times (UK) The astounding true story of how thousands of ordinary Germans, overcome by shame, guilt, and fear, killed themselves after the fall of the Third...

MSRP:
Now:
As low as
Was:
Why are Americans so angry with each other? The United States is caught in a partisan hyperconflict that divides politicians, communities—and even families. Politicians from the president to state...