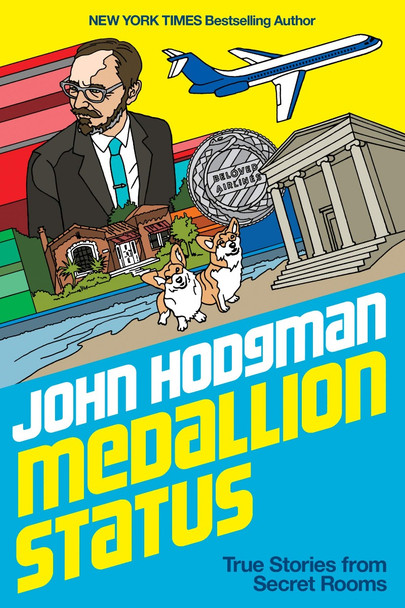 A hilarious and honest new book in which John Hodgman, New York Times bestselling author of Vacationland, leaves vacation behind and gets back to work as a still somewhat famous person . . . and then loses his job

After spending most of his twenties pursuing a career as a literary agent, John Hodgman decided to try his own hand at writing. Following an appearance to promote one of his books on The Daily Show, he was invited to return as a contributor. This led to an unexpected and, frankly, implausible career in front of the camera that has lasted to this very day, or at least until 2016.

In these pages, Hodgman explores the strangeness of his career, speaking plainly of fame, especially at the weird, marginal level he enjoyed it. Through these stories you will learn many things that only John Hodgman knows, such as how to prepare for a nude scene with an oboe, or what it feels like to go to a Hollywood party and realize that you are not nearly as famous as the Property Brothers, or, for that matter, those two famous corgis from Instagram. And there are stories about how, when your television gig is canceled, you can console yourself with the fact that all of that travel that made your young son so sad at least left you with a prize: platinum medallion status with your airline.

Both unflinchingly funny and deeply heartfelt, Medallion Status is a thoughtful examination of status, fame, and identity--and about the way we all deal with those moments when we realize we aren't platinum status anymore and will have to get comfortable in that middle seat again.

The book, Medallion Status: True Stories from Secret Rooms [Bulk, Wholesale, Quantity] ISBN# 9780525561101 in Hardcover by John Hodgman may be ordered in bulk quantities. Minimum starts at 25 copies. Availability based on publisher status and quantity being ordered.
View AllClose

Wangari's Trees of Peace : A True Story from Africa

MSRP:
Now: $17.99
Was:
As a young girl growing up in Kenya, Wangari was surrounded by trees. But years later when she returns home, she is shocked to see whole forests being cut down, and she knows that soon all the trees...

Styled: Secrets for Arranging Rooms, from Tabletops to Bookshelves

MSRP:
Now: $32.50
Was:
The ultimate guide to thinking like a stylist, with 1,000 design ideas for creating the most beautiful, personal, and livable rooms It’s easy to find your own style confidence once you know this...

The Secret of the Yellow Death : A True Story of Medical Sleuthing

MSRP:
Now: $19.00
Was:
Red oozes from the patient's gums. He has a rushing headache and the whites of his eyes look like lemons.... The book, The Secret of the Yellow Death : A True Story of Medical Sleuthing [Bulk,...

MSRP:
Now: $17.99
Was:
Young Nasreen has not spoken a word to anyone since her parents disappeared. In despair, her grandmother risks everything to enroll Nasreen in a secret school for girls. Will a devoted teacher, a...

The Librarian of Basra : A True Story from Iraq

Learning to Improve: How America's Schools Can Get Better at Getting Better

MSRP:
Now: $35.00
Was:
As a field, education has largely failed to learn from experience. Time after time, promising education reforms fall short of their goals and are abandoned as other promising ideas take their place...

MSRP:
Now: $30.00
Was:
In the international bestseller, Thinking, Fast and Slow, Daniel Kahneman, the renowned psychologist and winner of the Nobel Prize in Economics, takes us on a groundbreaking tour of the mind and...

MSRP:
Now: $4.99
Was:
Savage killers or angered victims? Shark Attack tells readers the truth about the most feared creatures in the sea while exploring the anatomy of the shark and touching on different breeds including...

MSRP:
Now: $7.99
Was:
Originally published in English in the United States as Return to sender by Julia Alvarez, copyright 2009 by Julia Alvarez, By Alfred A. Knopf, an imprint of Random House Children's Books, a division...

Summer in a Glass: The Coming of Age of Winemaking in the Finger Lakes

MSRP:
Now: $14.95
Was:
New York's Finger Lakes is home to the country's fastest-growing wine region, and each year millions of tourists spill into the tasting rooms of its wineries. Filled with fun and likable characters,...

MSRP:
Now: $30.00
Was:
The incredible story of U.S. senator and Iraq War veteran Tammy Duckworth. In EVERY DAY IS A GIFT, Tammy Duckworth takes readers through the amazing—and amazingly true—stories from her...