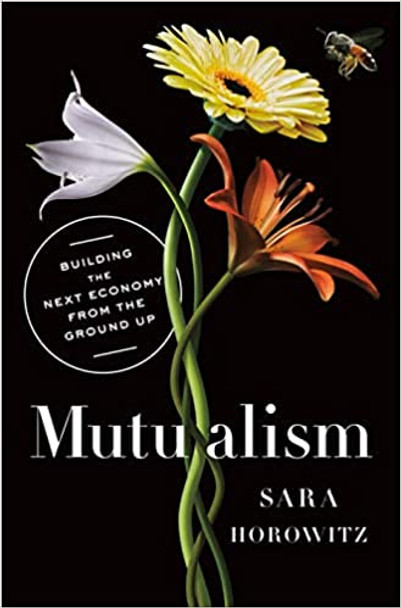 A profound look at the crisis of work and the collapse of the safety net, and a vision for a better way forward, rooted in America’s cooperative spirit, from the founder of the Freelancers Union

“Read this essential book to see how we can and must build the future.”—Reid Hoffman, co-founder of Linkedin

Mutualism: It’s not capitalism and it’s not socialism. It’s the future.

The twentieth century changed every facet of life for American workers: how much they could expect to earn and what they had the right to demand. But by 2027, a majority of Americans—from low-wage service workers to white-collar professionals—won’t be traditional employees. Benefits like paid sick leave, pensions, 401(k)s, disability insurance, and health care will be nearly extinct. To meet the needs of this new generation of workers, the government has done almost nothing.

In Mutualism, labor lawyer, former chair of the board of the New York Federal Reserve, and MacArthur “genius” Sara Horowitz brings us a solution to the current crisis of work that’s rooted in the best of American traditions, which she calls mutualism. Horowitz shows how the future of our economic safety net rests on this approach and demonstrates how mutualist organizations have helped us solve common problems in the past and are now quietly driving rural and urban economies alike all over the world, inspired not by for-profit corporations but by labor unions and trade associations, religious organizations and mutual aid societies, and vital social movements from women’s suffrage to civil rights.

Mutualism is for anyone who feels that the system is not working for them, and is looking for a new way to build collaboratively, create the new American social contract, and prosper in the twenty-first century.

The book, Mutualism: Building the Next Economy from the Ground Up [Bulk, Wholesale, Quantity] ISBN# 9780593133521 in Hardcover by Sara Horowitz may be ordered in bulk quantities. Minimum starts at 25 copies. Availability based on publisher status and quantity being ordered.
View AllClose

Soar!: Build Your Vision from the Ground Up

MSRP:
Now:
As low as
Was:
You don't have to be an entrepreneur to think like one and take flight with your dreams. Too often we remain in jobs that stifle our souls and leave us on the runway of opportunity with the engine...

Mutual Aid: Building Solidarity During This Crisis (and the Next)

MSRP:
Now:
As low as
Was:
Mutual aid is the radical act of caring for each other while working to change the world. Around the globe, people are faced with a spiralling succession of crises, from the Covid-19 pandemic and...

The Next Millionaire Next Door: Enduring Strategies for Building Wealth

From the Ground Up: Rebuilding Ground Zero to Re-Engineering America

MSRP:
Now:
As low as
Was:
Confronted with helping to rebuild the ruins of lower Manhattan in the aftermath of September 11, Ambassador Charles A. Gargano spent the next twelve years cleaning up and revitalizing Ground Zero...

From the Ground Up: A Journey to Reimagine the Promise of America

MSRP:
Now:
As low as
Was:
From the #1 bestselling author and former Starbucks CEO, here is a story that is part dramatic memoir, part blueprint of the new responsibilities that leaders and citizens share in America today. The...

The Most Powerful Woman in the Room Is You: Command an Audience and Sell Your Way to Success

MSRP:
Now:
As low as
Was:
**A 2019 OWL AWARD SHORTLIST WINNER IN THE WOMEN IN BUSINESS CATEGORY**Lydia Fenet, Senior Vice President of Christie’s and seasoned auctioneer, shares the secrets of success and the strategies...

MSRP:
Now:
As low as
Was:
Star Pilot features a lively, fact-packed narrative about the spaceships and vehicles of Star WarsThe book, Star Wars : Star Pilot ISBN 9780756611613 in Paperback by Buller, Laura may be ordered in...

You Are Enough: Heartbreak, Healing, and Becoming Whole

MSRP:
Now:
As low as
Was:
Mandy Hale, the creator of The Single Woman, the social media movement that rewrote the rulebook about singleness, challenges every woman to see that she is sufficient, acceptable, and complete. ...

How to Build a Goddamn Empire: Advice on Creating Your Brand with High-Tech Smarts, Elbow Grease, Infinite Hustle, and a Whole Lotta Heart

MSRP:
Now:
As low as
Was:
The inspiring story of how two female entrepreneurs turned a newsletter called Bulletin into a venture-backed, industry-disrupting brand. Filled with heart and humor, How to Build a Goddamn Empire...

MSRP:
Now:
As low as
Was:
A bold, hopeful, and thought-provoking account by “one of the world’s leading thinkers” (The Observer) of how we built a lonely world, how the pandemic accelerated the problem, and what we must do to...

This Is Not Normal: The Politics of Everyday Expectations

MSRP:
Now:
As low as
Was:
How our shifting sense of "what's normal" defines the character of democracy. "A provocative examination of social constructs and those who would alternately undo or improve them."—Kirkus Reviews ...

MSRP:
Now:
As low as
Was:
The incredible story of U.S. senator and Iraq War veteran Tammy Duckworth. In EVERY DAY IS A GIFT, Tammy Duckworth takes readers through the amazing—and amazingly true—stories from her incomparable...

Madam Speaker: Nancy Pelosi and the Lessons of Power

MSRP:
Now:
As low as
Was:
The definitive biography of Nancy Pelosi, the most powerful woman in American political history, written by New York Times bestselling author and ​USA Today Washington Bureau Chief Susan Page. The...

Manifesto for a Moral Revolution: Practices to Build a Better World

MSRP:
Now:
As low as
Was:
"An instant classic." ―Arianna Huffington "Will inspire people from across the political spectrum." ―Jonathan Haidt An essential shortlist of leadership ideas for everyone who wants to do good in...