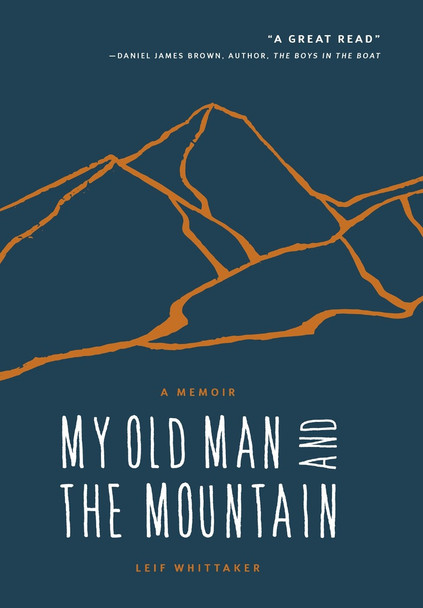 My Old Man and the Mountain is Leif Whittaker’s engaging and humorous story of what it was like to “grow up Whittaker”—the youngest son of Jim Whittaker and Dianne Roberts, in an extended family of accomplished climbers. He shares glimpses of his upbringing and how the pressure to climb started early on. Readers learn of his first adventures with family in the Olympic Mountains and on Mount Rainier; his close yet at times competitive relationship with his brother Joss; his battle with a serious back injury; and his efforts to stand apart from his father’s legacy. With wry honesty he depicts being a recent college grad, still living in his parents’ home and trying to find a purpose in life—digging ditches, building houses, selling t-shirts to tourists—until a chance encounter leads to the opportunity to climb Everest, just like his father did.

Leif heads to Nepal with all the excitement, irony, boredom, and trepidation that are part of high-altitude climbing. Well-known guides Dave Hahn and Melissa Arnot figure prominently in his story, as does “Big Jim.” But Leif’s story is not his father’s story. It’s a unique coming of age tale on the steep slopes of Everest and a climbing adventure that lights the imagination and fills an emotional human endeavor with universal meaning.

The book, My Old Man and the Mountain: A Memoir [Bulk, Wholesale, Quantity] ISBN# 9781680510683 in Hardcover by Leif Whittaker may be ordered in bulk quantities. Minimum starts at 25 copies. Availability based on publisher status and quantity being ordered.
View AllClose

My Side of the Mountain [Hardcover]

MSRP:
Now:
As low as
Was:
"Should appeal to all rugged individualists who dream of escape to the forest."—The New York Times Book Review Sam Gribley is terribly unhappy living in New York City with his family, so he runs...

MSRP:
Now:
As low as
Was:
The last novel Ernest Hemingway saw published, The Old Man and the Sea has proved itself to be one of the enduring works of American fiction. It is the story of an old Cuban fisherman and his supreme...

Know My Name: A Memoir [Hardcover]

MSRP:
Now:
As low as
Was:
The riveting, powerful memoir of the woman whose letter to Brock Turner gave voice to millions of survivors The book, Untitled: A Memoir [Bulk, Wholesale, Quantity] ISBN# 9780735223707 in Hardcover...

Hunger: A Memoir of (My) Body [Hardcover]

MSRP:
Now:
As low as
Was:
From the New York Times bestselling author of Bad Feminist: a searingly honest memoir of food, weight, self-image, and learning how to feed your hunger while taking care of yourself. “I ate and ate...

MSRP:
Now:
As low as
Was:
#1 New York Times Bestseller! Peter Schweizer has been fighting corruption—and winning—for years. In Throw Them All Out, he exposed insider trading by members of Congress, leading to the passage of...

Unsettled: What Climate Science Tells Us, What It Doesn't, and Why It Matters

MSRP:
Now:
As low as
Was:
"Surging sea levels are inundating the coasts." "Hurricanes and tornadoes are becoming fiercer and more frequent." "Climate change will be an economic disaster." You've heard all this...

MSRP:
Now:
As low as
Was:
For those who love the functionality of the screw top, double wall, stainless steel, vacuum bottles but want a wider mouth for easier pouring and cleaning, this 20 ounce bottle is Perfect...