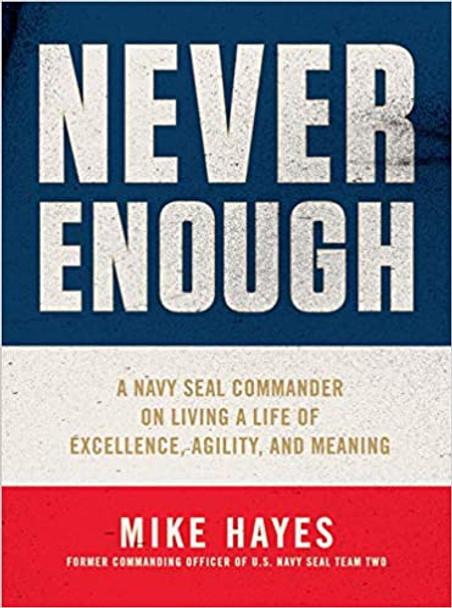 Mike Hayes has lived a lifetime of once-in-a-lifetime experiences. He has been held at gunpoint and threatened with execution. He’s jumped out of a building rigged to explode, helped amputate a teammate’s leg, and made countless split-second life-and-death decisions. He’s written countless emails to his family, telling them how much he loves them, just in case those were the last words of his they’d ever read. Outside of the SEALs, he’s run meetings in the White House Situation Room, negotiated international arms treaties, and developed high-impact corporate strategies.

Over his many years of leadership, he has always strived to be better, to contribute more, and to put others first. That’s what makes him an effective leader, and it’s the quality that he’s identified in all of the great leaders he’s encountered. That continual striving to lift those around him has filled Mike’s life with meaning and purpose, has made him secure in the knowledge that he brings his best to everything he does, and has made him someone others can rely on.

In Never Enough, Mike Hayes recounts dramatic stories and offers battle- and boardroom-tested advice that will motivate readers to do work of value, live lives of purpose, and stretch themselves to reach their highest potential.

The book, Never Enough: A Navy Seal Commander on Living a Life of Excellence, Agility, and Meaning [Bulk, Wholesale, Quantity] ISBN# 9781250753373 in Hardcover by Mike Hayes may be ordered in bulk quantities. Minimum starts at 25 copies. Availability based on publisher status and quantity being ordered.
View AllClose

The Power of Meaning: Crafting a Life That Matters

MSRP:
Now:
As low as
Was:
This wise, stirring book argues that the search for meaning can immeasurably deepen our lives and is far more fulfilling than the pursuit of personal happiness. There is a myth in our culture that...

Surfing with Sartre: An Aquatic Inquiry Into a Life of Meaning

MSRP:
Now:
As low as
Was:
Jean-Paul Sartre once declared waterskiing to be “the ideal limit of aquatic sports.” Aaron James, who is both an avid surfer and a professor of philosophy, vigorously disagrees. In these pages, he...

Carl and the Meaning of Life

MSRP:
Now:
As low as
Was:
From the often Caldecott-buzzed Deborah Freedman, a sweet and funny story about finding your place in the world. Carl is an earthworm. He spends his days happily tunneling in the soil until a field...

Embrace the Suck: The Navy Seal Way to an Extraordinary Life

MSRP:
Now:
As low as
Was:
During the brutal crucible of Navy SEAL training, instructors often tell students to "embrace the suck." This phrase conveys the one lesson that is vital for any SEAL hopeful to learn: lean into the...

Jeremy Fink and the Meaning of Life [Paperback]

MSRP:
Now:
As low as
Was:
Jeremy Fink has been obsessed with the meaning of life ever since a box from his father arrived at his house five years after his father was killed in a car accident. Jeremy is determined to find the...

Thinking in Bets: Making Smarter Decisions When You Don't Have All the Facts [Paperback]

MSRP:
Now:
As low as
Was:
Wall Street Journal bestseller! Poker champion turned business consultant Annie Duke teaches you how to get comfortable with uncertainty and make better decisions as a result. In Super Bowl XLIX,...

MSRP:
Now:
As low as
Was:
**2019 OWL AWARD WOMEN IN BUSINESS CATEGORY WINNER**Let's be honest--none of us were given an owner's manual at birth. If you're having trouble solving a problem or making a dream happen, the problem...

MSRP:
Now:
As low as
Was:
The revolutionary StrengthsFinder assessment is back, new and improved! Discover your top five talents and refer to the personalized action-planning guide for strategies on building each talent. Your...