No Ordinary Disruption: The Four Global Forces Breaking All the Trends [Paperback] 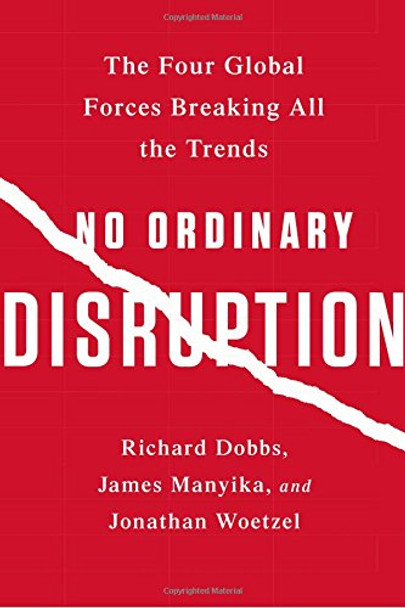 No Ordinary Disruption: The Four Global Forces Breaking All the Trends [Paperback]

Our intuition on how the world works could well be wrong. We are surprised when new competitors burst on the scene, or businesses protected by large and deep moats find their defenses easily breached, or vast new markets are conjured from nothing. Trend lines resemble saw-tooth mountain ridges. The world not only feels different. The data tell us it is different. Based on years of research by the directors of the McKinsey Global Institute, No Ordinary Disruption: The Four Forces Breaking all the Trends is a timely and important analysis of how we need to reset our intuition as a result of four forces colliding and transforming the global economy: the rise of emerging markets, the accelerating impact of technology on the natural forces of market competition, an aging world population, and accelerating flows of trade, capital and people. Our intuitions formed during a uniquely benign period for the world economy—often termed the Great Moderation. Asset prices were rising, cost of capital was falling, labour and resources were abundant, and generation after generation was growing up more prosperous than their parents. But the Great Moderation has gone. The cost of capital may rise. The price of everything from grain to steel may become more volatile. The world’s labor force could shrink. Individuals, particularly those with low job skills, are at risk of growing up poorer than their parents. What sets No Ordinary Disruption apart is depth of analysis combined with lively writing informed by surprising, memorable insights that enable us to quickly grasp the disruptive forces at work. For evidence of the shift to emerging markets, consider the startling fact that, by 2025, a single regional city in China—Tianjin—will have a GDP equal to that of the Sweden, of that, in the decades ahead, half of the world’s economic growth will come from 440 cities including Kumasi in Ghana or Santa Carina in Brazil that most executives today would be hard-pressed to locate on a map.

The book, No Ordinary Disruption: The Four Global Forces Breaking All the Trends [Bulk, Wholesale, Quantity] ISBN# 9781610397353 in Paperback by Richard Dobbs;James Manyika;Jonathan Woetzel may be ordered in bulk quantities. Minimum starts at 25 copies. Availability based on publisher status and quantity being ordered.
View AllClose

MSRP:
Now: $30.00
Was:
Mark Penn has boldly argued that the future is not shaped by society’s broad forces but by quiet changes within narrow slices of the population. Ten years ago, he showed how the behavior of one small...

The Culture Map: Breaking Through the Invisible Boundaries of Global Business

MSRP:
Now: $26.99
Was:
Whether you work in a home office or abroad, business success in our ever more globalized and virtual world requires the skills to navigate through cultural differences and decode cultures foreign to...

No Ordinary Disruption: The Four Global Forces Breaking All the Trends

Our intuition on how the world works could well be wrong. We are surprised when new competitors burst on the scene, or businesses protected by large and deep moats find their defenses easily...

Verizon Untethered: An Insider's Story of Innovation and Disruption [Paperback]

MSRP:
Now: $17.00
Was:
As seen on CNBC! A history of the transformation of Verizon and the telecommunications industry told through the eyes of founding CEO Ivan Seidenberg and his leadership team, with highlights and...

The Outpost: An Untold Story of American Valor

MSRP:
Now: $19.99
Was:
The heartbreaking and inspiring story of one of America's deadliest battles during the war in Afghanistan, acclaimed by critics everywhere as a classic. At 5:58 AM on October 3rd, 2009, Combat...

Me on the Map [Paperback]

Illustrated in full color. In this playful introduction to maps and geography, step by simple step, a young girl shows readers herself on a map of her room, her room on the map of her house, her...

MSRP:
Now: $7.99
Was:
What can you make with one oval, two circles, and eight triangles? Just ask three clever mice—who even find a funny way to trick a sneaky cat. Ellen Stoll Walsh once again proves that...

MSRP:
Now: $7.99
Was:
As the first book in the Lemonade War series, readers are introduced to two very different siblings with the same goal – to create the most successful lemonade stand. Not only is the sibling rivalry...

Think Like a Freak: The Authors of Freakonomics Offer to Retrain Your Brain [Hardcover]

MSRP:
Now: $28.99
Was:
The New York Times bestselling Freakonomics changed the way we see the world, exposing the hidden side of just about everything. Then came SuperFreakonomics, a documentary film, an award-winning...

Maybe It's You: Cut the Crap. Face Your Fears. Love Your Life. [Paperback]

MSRP:
Now: $15.99
Was:
Maybe It's You picks up where You Are a Badass leaves off--it's a no-nonsense, practical manual to help readers figure out not just what they want out of life, but how to actually get there...

Black Box Thinking: Why Most People Never Learn from Their Mistakes--But Some Do [Paperback]

MSRP:
Now: $17.00
Was:
Nobody wants to fail. But in highly complex organizations, success can happen only when we confront our mistakes, learn from our own version of a black box, and create a climate where it’s safe to...

Out of Darkness [Hardcover]

Locked in: The Will to Survive and the Resolve to Live [Hardcover]

MSRP:
Now: $24.99
Was:
ESPN personality and Paralympics champion Victoria Arlen shares her courageous and miraculous story of recovery after falling into a mysterious vegetative state at age eleven and how she broke free,...