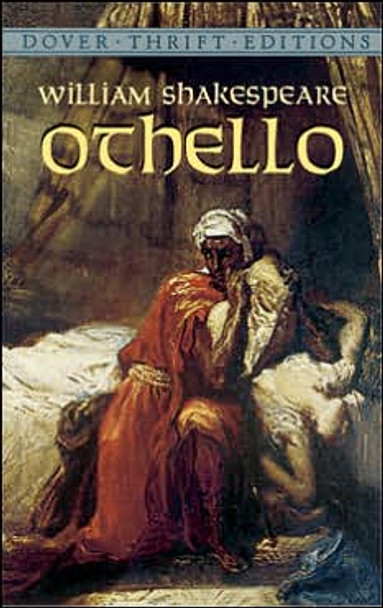 MSRP:
Now: List Price $3.00
Was:
— You save
Paperback
This product qualifies for FREE US Ground Shipping on orders over $100.

Minimum purchase of 50 required for this product.
Price Match
Frequently bought together:

One of the greatest of Shakespeare's tragedies, Othello tells the story of a Moorish general in command of the armed forces of Venice who earns the enmity of his ensign Iago by passing him over for a promotion. Partly for revenge and partly out of pure evil, Iago plots to convince Othello that Desdemona, his wife, has been unfaithful to him. Iago succeeds in his evil aims only too well, for the enraged Othello murders Desdemona. When Othello later learns of her innocence, he takes his own life. Bleak and unsparing, this play offers a stunning portrait of an arch-villain and an astute psychological study of the nature of evil.

The book, Othello ( Dover Thrift Editions ) [Bulk, Wholesale, Quantity] ISBN# 9780486290973 in Paperback by Shakespeare, William may be ordered in bulk quantities. Minimum starts at 25 copies. Availability based on publisher status and quantity being ordered.
View AllClose

MSRP:
Now:
As low as
Was:
One of the world's most famous and influential books, Meditations, by the Roman emperor Marcus Aurelius (A.D. 121–180), incorporates the stoic precepts he used to cope with his life as a warrior and...

MSRP:
Now:
As low as
Was:
An ardent activist, champion of political reform, novelist, and progressive journalist, Upton Sinclair is perhaps best known today for The Jungle — his devastating exposé of the meat-packing industry...

MSRP:
Now:
As low as
Was:
First published in 1818, Persuasion was Jane Austen's last work. Its mellow character and autumnal tone have long made it a favorite with Austen readers. Set in Somersetshire and Bath, the novel...

MSRP:
Now:
As low as
Was:
"Someone must have been telling lies about Josef K., he knew he had done nothing wrong but, one morning, he was arrested." From its gripping first sentence onward, this novel exemplifies the term...

MSRP:
Now:
As low as
Was:
Probably composed in the eighth century B.C. and based on an actual historical event of the thirteenth century B.C., Homer's Iliad is one of the great epics of the Western world. The poem unfolds...

Everything Is the Worst: A Book for People Who Just Can't [Hardcover]

MSRP:
Now:
As low as
Was:
An anti-inspiration book that celebrates what we all know, deep in our hearts: Everything is definitely not going to be OK. Snarky sayings are beautifully illustrated to capture those everyday inner...

MSRP:
Now:
As low as
Was:
The must-have deluxe edition of the fantastically acclaimed new translation of one of the world's most celebrated novels. Emma Bovary is the original desperate housewife. Beautiful but bored, she...

MSRP:
Now:
As low as
Was:
The book, Hey! Wake Up! ISBN 9780761119760 in Board Book by Boynton, Sandra may be ordered in bulk quantities . Availability based on publisher status and quantity being ordered.This... The book,...

The Four Obsessions of an Extraordinary Executive: The Four Disciplines at the Heart of Making Any Organization World Class

MSRP:
Now:
As low as
Was:
As CEO, most everything that Rich Oa?Connor did had something to do with at least one of the four disciplines on his famed "yellow sheet." Some of the firma's executives joked that he was obsessed...

The Ship We Built

MSRP:
Now:
As low as
Was:
**A 2020 OWL AWARD SHORTLIST WINNER IN THE MIDDLE SCHOOL CATEGORY***"Everyone should read this remarkable, affecting novel."--Kirkus Reviews, starred review Tender and wise, The Ship We Built is...