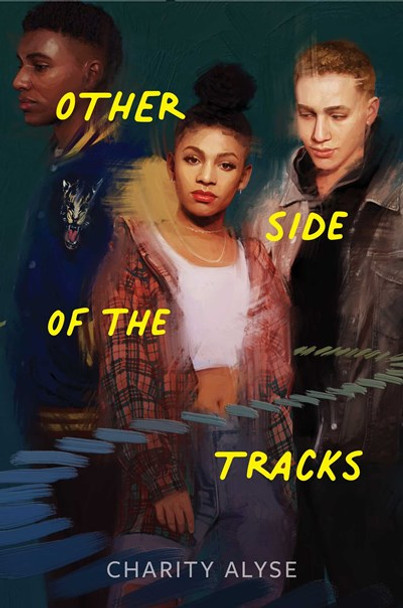 This lilting and riveting young adult debut novel about three teens entangled by secret love, open hatred, and the invisible societal constraints wrapped around people both Black and white is perfect for readers of All American Boys and The Hate U Give.

There is an unspoken agreement between the racially divided towns of Bayside and Hamilton: no one steps over the train tracks that divide them. Or else.

Not until Zach Whitman anyway, a white boy who moves in from Philly and who dreams of music. When he follows his dream across the tracks to meet his idol, the famous jazz musician who owns The Sunlight Record Shop in Hamilton, he’s flung into Capri Collins’s path.

Capri has big plans: she wants to follow her late mother’s famous footsteps, dancing her way onto Broadway, and leaving this town for good, just like her older brother, Justin, is planning to do when he goes off to college next year. As sparks fly, Zach and Capri realize that they can help each other turn hope into a reality, even if it means crossing the tracks to do it.

But one tragic night changes everything. When Justin’s friend, the star of Hamilton’s football team, is murdered by a white Bayside police officer, the long-standing feud between Bayside and Hamilton becomes an all-out war And Capri, Justin, and Zach are right in the middle of it.

The book, Other Side of the Tracks [Bulk, Wholesale, Quantity] ISBN# 9781534497719 in Hardcover by Charity Alyse may be ordered in bulk quantities. Minimum starts at 25 copies. Availability based on publisher status and quantity being ordered.
View AllClose

MSRP:
Now:
As low as
Was:
(An) irresistible account of a child's imaginary 8,000-mile journey through the earth to discover what's inside. Facts about the composition of the earth are conveyed painlessly and memorably"...

The Other Side of the Sky: A Memoir

The Other Side of Dark

MSRP:
Now:
As low as
Was:
Only Sarah senses the horror. The minute she steps through the doorway of her family's new home, Sarah feels a smothering cold mist, and hears the echo of a scream and a heartbreaking whisper in...

On the Other Side of Freedom

MSRP:
Now:
As low as
Was:
From the internationally recognized civil rights activist/organizer and host of the podcast Pod Save the People, a meditation on resistance, justice, and freedom, and an intimate portrait of a...

The Other Side [Hardcover]

MSRP:
Now:
As low as
Was:
Clover's mom says it isn't safe to cross the fence that segregates their African-American side of town from the white side where Anna lives. But the two girls strike up a friendship, and get around...

MSRP:
Now:
As low as
Was:
A poetic coming-of-age memoir that probes the legacies and myths of family, race, and religion—from Nigeria to England to America Mary-Alice Daniel’s family moved from West Africa to England when...

MSRP:
Now:
As low as
Was:
The riveting true story of America’s first homegrown Islamist terror attack, the 1977 Hanafi Muslim siege of Washington, D.C. Late in the morning of March 9, 1977, seven men stormed the Washington,...

MSRP:
Now:
As low as
Was:
Seventeen-year-old Avery Anderson is convinced her senior year is ruined when she's uprooted from her life in DC and forced into the hostile home of her terminally ill grandmother, Mama Letty. The...