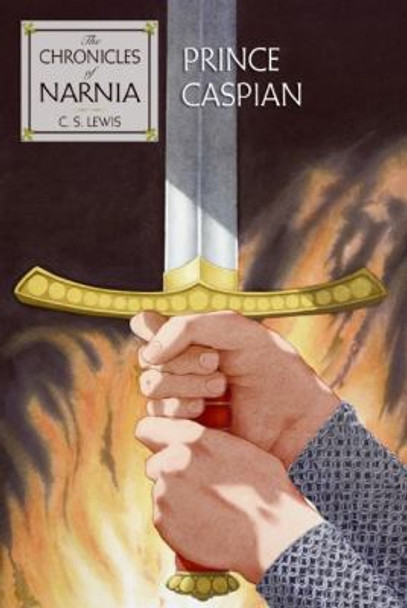 The Pevensie siblings travel back to Narnia to help a prince denied his rightful throne as he gathers an army in a desperate attempt to rid his land of a false king. But in the end, it is a battle of honor between two men alone that will decide the fate of an entire world. Prince Caspian is the fourth book in C. S. Lewis's classic fantasy series, which has been drawing readers of all ages into a magical land where animals talk and trees walk for over sixty years. This is a stand-alone novel, but if you would like to read more of Lucy and Edmund's adventures, pick up The Voyage of the Dawn Treader, the fifth book in The Chronicles of Narnia.

The book, Prince Caspian: The Return to Narnia [Bulk, Wholesale, Quantity] ISBN# 9780064405003 in Paperback by Lewis, C. S. may be ordered in bulk quantities. Minimum starts at 25 copies. Availability based on publisher status and quantity being ordered.
View AllClose

MSRP:
Now:
As low as
Was:
Step through the wardrobe and add your own splash of color to the magical world of Narnia in The Chronicles of Narnia Official Coloring Book, with quotes and art from all seven books in C. S. Lewis’s...

Prince Caspian: The Return to Narnia

The four Pevensies help Caspian battle Miraz and ascend his rightful throne. Narnia . . . the land between the lamp-post and the castle of Cair Paravel, where animals talk, where magical things...

MSRP:
Now:
As low as
Was:
A mass-market paperback edition of Prince Caspian, book four in the classic fantasy series, The Chronicles of Narnia, featuring cover art by Cliff Nielsen and black-and-white interior illustrations...

The Chronicles of Narnia

MSRP:
Now:
As low as
Was:
Beloved by generations for more than 50 years, this classic children's series is now available in a special adult editionThe book, The Chronicles of Narnia ISBN 9780066238500 in Paperback by Baynes,...

The Chronicles of Narnia Box Set: The Magician's Nephew; The Lion, the Witch and the Wardrobe; The Hourse and His Boy; Prince Caspian; The Voyage of the Dawn Treader; The Silver Chair; The Last Battle

MSRP:
Now:
As low as
Was:
Collection includes all seven of the novels in the seriesThe book, The Chronicles of Narnia Box Set : The Magician's Nephew; The Lion, the Witch and the Wardrobe; The Hourse and His Boy; Prince...

MSRP:
Now:
As low as
Was:
Mr. Drake’s second grade class has a new class pet. Fluffity appears to be a cute and docile hamster—but the kids soon discover that she is not the cuddly pet they expected. From the moment her cage...

MSRP:
Now:
As low as
Was:
Mrs. Jeepers may -- or may not -- be a vampire in this funny and spooky series from Graphix Chapters. The third graders at Bailey Elementary are so hard to handle that all of their teachers have...

MSRP:
Now:
As low as
Was:
This title will explain what light is and how it travels in waves. It also explains how humans see light with their eyes as color! It is complete with carefully chosen photographs and labeled...

The Me I Want to Be: Becoming God's Best Version of You [Paperback]

MSRP:
Now:
As low as
Was:
The Me I Want to Be by John Ortberg—the bestselling author of When the Game Is Over, It All Goes Back in the Box; God Is Closer Than You Think; and The Life You’ve Always Wanted—will help you...

What a Year: A 26 Fairmount Avenue Book [Paperback]

MSRP:
Now:
As low as
Was:
The year 1940 is a very big year for Tomie-it's the start of first grade, and it's his first birthday in the new house at 26 Fairmount Avenue. It's also the first year that Tomie gets to go...

MSRP:
Now:
As low as
Was:
When brain surgery makes a mouse into a genius, dull-witted Charlie Gordon wonders if it might also work for him. The book, Flowers For Algernon (Turtleback School & Library Binding Edition) [Bulk,...