Pumpkinflowers: A Soldier's Story of a Forgotten War 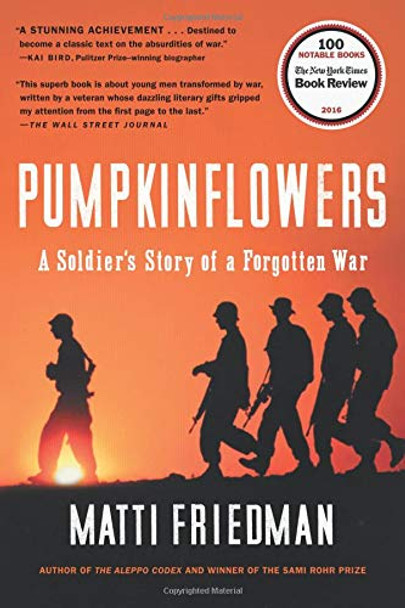 Pumpkinflowers: A Soldier's Story of a Forgotten War

“A book about young men transformed by war, written by a veteran whose dazzling literary gifts gripped my attention from the first page to the last.” —The Wall Street Journal“Friedman’s sober and striking new memoir . . . [is] on a par with Tim O’Brien’s The Things They Carried -- its Israeli analog.” —The New York Times Book Review It was just one small hilltop in a small, unnamed war in the late 1990s, but it would send out ripples that are still felt worldwide today. The hill, in Lebanon, was called the Pumpkin; flowers was the military code word for “casualties.” Award-winning writer Matti Friedman re-creates the harrowing experience of a band of young Israeli soldiers charged with holding this remote outpost, a task that would change them forever, wound the country in ways large and small, and foreshadow the unwinnable conflicts the United States would soon confront in Afghanistan, Iraq, and elsewhere.Pumpkinflowers is a reckoning by one of those young soldiers now grown into a remarkable writer. Part memoir, part reportage, part history, Friedman’s powerful narrative captures the birth of today’s chaotic Middle East and the rise of a twenty-first-century type of war in which there is never a clear victor and media images can be as important as the battle itself. Raw and beautifully rendered, Pumpkinflowers will take its place among classic war narratives by George Orwell, Philip Caputo, and Tim O’Brien. It is an unflinching look at the way we conduct war today.

The book, Pumpkinflowers: A Soldier's Story of a Forgotten War [Bulk, Wholesale, Quantity] ISBN# 9781616206918 in Paperback by Matti Friedman may be ordered in bulk quantities. Minimum starts at 25 copies. Availability based on publisher status and quantity being ordered.
View AllClose

Forgotten Realms: The Legend of Drizzt Anthology: The Collected Stories

8 Seconds of Courage: A Soldier's Story from Immigrant to the Medal of Honor

MSRP:
Now: $25.00
Was:
A story of valor and the making of a hero—Florent Groberg, who grew up in France, emigrated to the US, and was the first immigrant in forty years to receive the Congressional Medal of Honor after he...

Not Forgotten: The True Story of My Imprisonment in North Korea

MSRP:
Now: $24.99
Was:
For the first time, Kenneth Bae tells the full story surrounding his arrest and imprisonment in North Korea. Not Forgotten is a modern story of intrigue, suspense, and heart. Driven by his passion to...

The Zookeeper's Wife: A War Story

MSRP:
Now: $15.95
Was:
A true story in which the keepers of the Warsaw Zoo saved hundreds of people from Nazi hands. After their zoo was bombed, Polish zookeepers Jan and Antonina Zabinski managed to save over three...

Behind the Blue and Gray: The Soldier's Life in the Civil War

MSRP:
Now: $9.99
Was:
Traces, in this second of a three part series, the events of the Civil War from the first battle to the surrender with emphasis on the experiences of the individual soldierThe book, Behind the Blue...

The Secrets of Happy Families: Improve Your Mornings, Rethink Family Dinner, Fight Smarter, Go Out and Play, and Much More [Hardcover]

The New Way to Cake: Simple Recipes with Exceptional Flavor

MSRP:
Now: $21.99
Was:
Put Flavor First with 60 Easy, Stylish Cakes Unlock a whole new world of flavor with Benjamina Ebuehi’s signature cakes. Inspired by her journey to The Great British Bake Off and beyond, Benjamina’s...

The Next Smart Step: How to Overcome Gender Stereotypes and Build a Stronger Organization

MSRP:
Now: $24.99
Was:
“A candid, readable, and useful book about how we can get past talking about gender bias and actually start doing something about it.” —Adam Grant, New York Times bestselling author of ORIGINALS...

Letters to the Church [Hardcover]

MSRP:
Now: $22.99
Was:
If God had it His way, what would your church look like? The New York Times bestselling author of Crazy Love challenges readers to be the Church as God intends. Do you want more from your...

It's Ok That You're Not Ok: Meeting Grief and Loss in a Culture That Doesn't Understand

MSRP:
Now: $17.99
Was:
When a painful loss or life-shattering event upends your world, here is the first thing to know: there is nothing wrong with grief. Grief is simply love in its most wild and painful form, says Megan...

MSRP:
Now: $39.95
Was:
In late 1945 local Japanese turned their energies toward creating new behaviors and institutions that would give young people better skills to combat repression at home and coercion abroad. They...

MSRP:
Now: $50.00
Was:
Experience 15 of the West’s finest rustic modern homes in this beautifully written and photographed book. An intimate peek into rustic modern private homes and other properties across the Mountain...