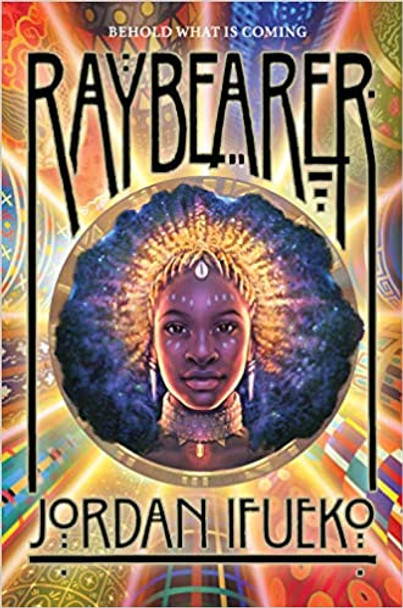 **A 2020 OWL AWARD SHORTLIST WINNER IN THE HIGH SCHOOL CATEGORY**

Nothing is more important than loyalty. But what if you’ve sworn to protect the one you were born to destroy?

Tarisai has always longed for the warmth of a family. She was raised in isolation by a mysterious, often absent mother known only as The Lady. The Lady sends her to the capital of the global empire of Aritsar to compete with other children to be chosen as one of the Crown Prince’s Council of 11. If she’s picked, she’ll be joined with the other Council members through the Ray, a bond deeper than blood. That closeness is irresistible to Tarisai, who has always wanted to belong somewhere. But The Lady has other ideas, including a magical wish that Tarisai is compelled to obey: Kill the Crown Prince once she gains his trust. Tarisai won’t stand by and become someone’s pawn—but is she strong enough to choose a different path for herself? With extraordinary world-building and breathtaking prose, Raybearer is the story of loyalty, fate, and the lengths we’re willing to go for the ones we love.

The book, Raybearer [Bulk, Wholesale, Quantity] ISBN# 9781419739828 in Hardcover by Jordan Ifueko may be ordered in bulk quantities. Minimum starts at 25 copies. Availability based on publisher status and quantity being ordered.

MSRP:
Now:
As low as
Was:
CNN news anchor Brooke Baldwin explores the phenomenon of what she calls the “huddle,” when women get together—in politics, Hollywood, activism, the arts, sports, and everyday friendships—to provide...

Inside Out and Back Again [Paperback]

MSRP:
Now:
As low as
Was:
Inside Out and Back Again is a New York Times bestseller, a Newbery Honor Book, and a winner of the National Book Award! Inspired by the author's childhood experience of fleeing Vietnam after the...

No Ordinary Dog: My Partner from the Seal Teams to the Bin Laden Raid [Hardcover]

MSRP:
Now:
As low as
Was:
No Ordinary Dog is the powerful true story of a SEAL Team Operator and military dog handler, and the dog that saved his life. Two dozen Navy SEALs descended on Osama bin Laden’s compound in May 2011...

MSRP:
Now:
As low as
Was:
**A 2019 OWL AWARD LONGLIST WINNER IN THE MIDDLE SCHOOL CATEGORY**A heartbreaking and powerful story about a black boy killed by a police officer, drawing connections through history, from...