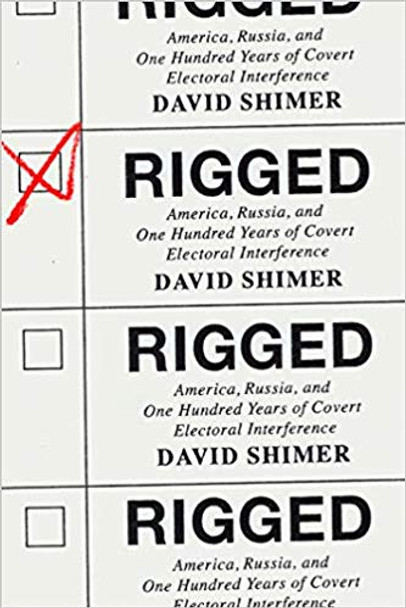 MSRP:
Now: List Price $29.95
Was:
— You save
Hardcover
This product qualifies for FREE US Ground Shipping on orders over $100.

"This pioneering and judicious history of foreign intervention in elections should be read by everyone who wants to defend democracy now." --Timothy Snyder, author of On Tyranny

Russia's interference in 2016 marked only the latest chapter of a hidden and revelatory history. In Rigged, David Shimer tells the sweeping story of covert electoral interference past and present. He exposes decades of secret operations--by the CIA, the KGB, and Vladimir Putin's Russia--to shape electoral outcomes, melding deep historical research with groundbreaking interviews with more than 130 key players, from former CIA directors to a KGB general.

What Americans should make of Russia's attack in 2016 is still hotly debated, even after the release of the Mueller Report and years of media coverage. Shimer shows that Putin's operation was, in fact, a continuation of an ongoing struggle, using familiar weapons radically enhanced by new technology. Casting aside partisanship and sensationalism, Rigged reveals new details about what Russia achieved in 2016, how the United States responded, and why Putin has also been interfering in elections across the globe in recent years.

Understanding 2016 as one battle in a much longer war is essential to understanding the critical threat currently posed to America's electoral sovereignty and how to defend against it. Illuminating how the lessons of the past can be used to protect our democracy in the future, Rigged is an essential book for readers of every political persuasion.

The book, Rigged: America, Russia, and One Hundred Years of Covert Electoral Interference [Bulk, Wholesale, Quantity] ISBN# 9780525659006 in Hardcover by David Shimer may be ordered in bulk quantities. Minimum starts at 25 copies. Availability based on publisher status and quantity being ordered.

One Hundred Years of Solitude

The Lost Gutenberg: The Astounding Story of One Book's Five-Hundred-Year Odyssey

MSRP:
Now:
As low as
Was:
"An addictive and engaging look at the ‘competitive, catty and slightly angst-ridden’ heart of the world of book collecting.” - The Houston Chronicle The never-before-told story of one extremely...

One Hundred Years of Solitude [Paperback]

MSRP:
Now:
As low as
Was:
From the former executive director of the Pro Football Hall of Fame comes a sweeping and lively history of the National Football League, timed to coincide with the NFL’s 100th anniversary season. ...

Slaughterhouse-Five Or The Children's Crusade: A Duty-Dance with Death [Mass Market Paperback]

MSRP:
Now:
As low as
Was:
Slaughterhous-Five is one of the world's great anti-war books. Centering on the infamous fire-bombing of Dresden, Billy Pilgrim's odyssey through time reflects the mythic journey of our own fractured...

MSRP:
Now:
As low as
Was:
Remember the wonderfully romantic book of love letters that Carrie reads aloud to Big in the recent blockbuster film, Sex and the City? Fans raced to buy copies of their own, only to find out that...

The Schmuck in My Office: How to Deal Effectively with Difficult People at Work [Hardcover]

MSRP:
Now:
As low as
Was:
Everyone has a “schmuck” in their office―a difficult, disruptive person who upsets the workplace, confuses their co-workers and causes concern. No one is safe from a schmuck. They come in many sizes...

MSRP:
Now:
As low as
Was:
In this stunning sequel to Newbery Medal winner Sarah, Plain and Tall, Anna and Caleb travel with their new mother, Sarah, to Maine to take refuge from the prairie drought, a journey that teaches...

MSRP:
Now:
As low as
Was:
Each of these 85 models features detailed, easy-to-follow diagrams, offering paperfolders of all ages a simple guide to making swans, houses, vases, boats, hats, and other charming figures.... The...

What Happens Next? Seed to Plant (Rookie Toddler)

MSRP:
Now:
As low as
Was:
Rookie Toddler books offer fun ways to engage with little ones during story time and play time. Each book includes story-related tips that help extend the reading experience and emphasize key...

MSRP:
Now:
As low as
Was:
In Putting Jesus First, the seventh study in the Jesus Calling Bible Study Series, participants are guided through eight sessions of study on how to follow Christ with their whole hearts and seek him...