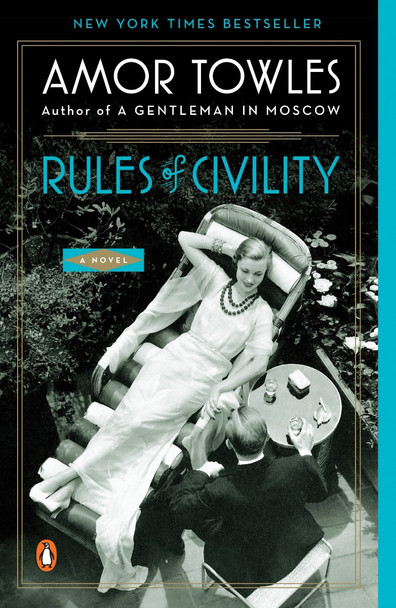 From the New York Times-bestselling author of A Gentleman in Moscow, a “sharply stylish” (Boston Globe) novel of a young woman in post-Depression era New York who suddenly finds herself thrust into high society. On the last night of 1937, twenty-five-year-old Katey Kontent is in a second-rate Greenwich Village jazz bar when Tinker Grey, a handsome banker, happens to sit down at the neighboring table. This chance encounter and its startling consequences propel Katey on a year-long journey into the upper echelons of New York society—where she will have little to rely upon other than a bracing wit and her own brand of cool nerve. With its sparkling depiction of New York’s social strata, its intricate imagery and themes, and its immensely appealing characters, Rules of Civility won the hearts of readers and critics alike.

The book, Rules of Civility [Bulk, Wholesale, Quantity] ISBN# 9780143121169 in Paperback by Amor Towles may be ordered in bulk quantities. Minimum starts at 25 copies. Availability based on publisher status and quantity being ordered.
View AllClose

Mastering Civility: A Manifesto for the Workplace

MSRP:
Now:
As low as
Was:
From the leading authority on workplace incivility, Christine Porath, shows why it pays to be civil, and reveals just how to enhance effectiveness in the workplace and beyond by mastering civility...

No Rules Rules: Netflix and the Culture of Reinvention

MSRP:
Now:
As low as
Was:
**A 2020 OWL AWARD LONGLIST WINNER IN THE MANAGEMENT & CULTURE CATEGORY**Netflix cofounder Reed Hastings reveals for the first time the unorthodox culture behind one of the world's most...

MSRP:
Now:
As low as
Was:
This 2007 Newbery Honor Book is a humorous and heartwarming debut about feeling different and finding acceptance. Now in After Words paperback! Twelve-year-old Catherine just wants a normal life...

MSRP:
Now:
As low as
Was:
Is civility dead? Americans ask this question every election season, but their concern is hardly limited to political campaigns. Doubts about civility regularly arise in just about every aspect of...

MSRP:
Now:
As low as
Was:
Most people would agree that thoughtful behavior and common decency are in short supply, or simply forgotten in hurried lives of emails, cellphones, and multi-tasking. In Choosing Civility, P. M...