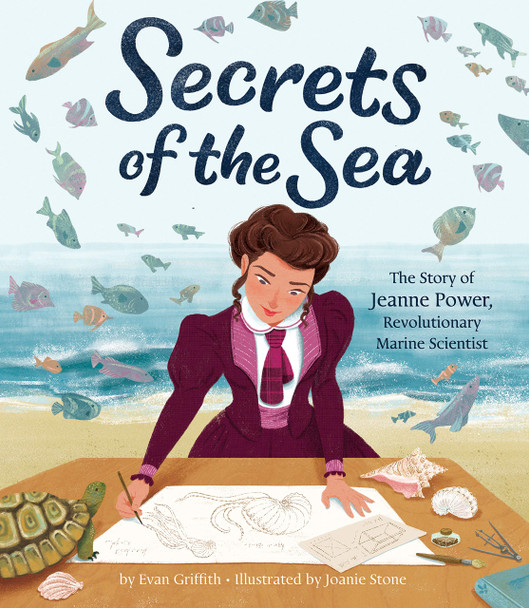 The curiosity, drive, and perseverance of the nineteenth-century woman scientist who pioneered the use of aquariums to study ocean life are celebrated in this gorgeous, empowering picture book.

How did a nineteenth-century dressmaker revolutionize science? Jeanne Power was creative: she wanted to learn about the creatures that swim beneath the ocean waves, so she built glass tanks and changed the way we study underwater life forever. Jeanne Power was groundbreaking: she solved mysteries of sea animals and published her findings at a time when few of women’s contributions to science were acknowledged. Jeanne Power was persistent: when records of her research were lost, she set to work repeating her studies. And when men tried to take credit for her achievements, she stood firm and insisted on the recognition due to her.

Jeanne Power was inspiring, and the legacy of this pioneering marine scientist lives on in every aquarium.

The book, Secrets of the Sea: The Story of Jeanne Power, Revolutionary Marine Scientist [Bulk, Wholesale, Quantity] ISBN# 9780358244325 in Hardcover by Evan Griffith;Joanie Stone may be ordered in bulk quantities. Minimum starts at 25 copies. Availability based on publisher status and quantity being ordered.
View AllClose

Good and Mad: The Revolutionary Power of Women's Anger

MSRP:
Now:
As low as
Was:
“In a year when issues of gender and sexuality dominated the national conversation, no one shaped that exchange more than Rebecca Traister. Her wise and provocative columns helped make sense of a...

Good and Mad: The Revolutionary Power of Women's Anger [Paperback]

MSRP:
Now:
As low as
Was:
Journalist Rebecca Traister’s New York Times bestselling exploration of the transformative power of female anger and its ability to transcend into a political movement is “a hopeful, maddening...

She Fought, Too: Stories of Revolutionary War Heroines

MSRP:
Now:
As low as
Was:
American schoolchildren have long heard the stories of American Revolutionary War heroes-men such as George Washington, Thomas Jefferson, or Paul Revere. They may even know about the more prominent...

MSRP:
Now:
As low as
Was:
The adorable tale of a family of mice stowaways on an adventurous ship's journey In the beloved tradition of The Borrowers, The Tale of Despereaux, and The Cricket in Times Square, here is an...

Haroun and the Sea of Stories

The End of Alchemy: Money, Banking, and the Future of the Global Economy [Hardcover]

MSRP:
Now:
As low as
Was:
“Mervyn King may well have written the most important book to come out of the financial crisis. Agree or disagree, King’s visionary ideas deserve the attention of everyone from economics students to...

The Girl from Widow Hills

MSRP:
Now:
As low as
Was:
From the New York Times bestselling author of The Last House Guest—a Reese Witherspoon Book Club pick—comes a riveting new novel of psychological suspense about a young woman plagued by night terrors...

The Dolly Llama: Words of Wisdom from a Spiritual Animal

MSRP:
Now:
As low as
Was:
Meet the Dolly Llama, the world’s first behooved spiritual leader, as he shares his words of wisdom and teachings for the first time. Llama Karma lies within you! In this gem of a book, his...

Everything You Need to Ace World History in One Big Fat Notebook: The Complete Middle School Study Guide

MSRP:
Now:
As low as
Was:
Help your middle school students learn the fundamentals of World History by providing them with the Everything You Need to Ace World History in One Big Fat Notebook in bulk from BookPal! This highly...

Edwina, the Dinosaur Who Didn't Know She Was Extinct

Emmy in the Key of Code

MSRP:
Now:
As low as
Was:
In this innovative middle grade novel, coding and music take center stage as new girl Emmy tries to find her place in a new school. Perfect for fans of the Girls Who Code series and The Crossover...

What Are Your Words?: A Book about Pronouns

MSRP:
Now:
As low as
Was:
Follow Ari through their neighborhood as they try to find their words in this sweet, accessible introduction to gender-inclusive pronouns that is perfect for readers of all ages. Whenever Ari's...