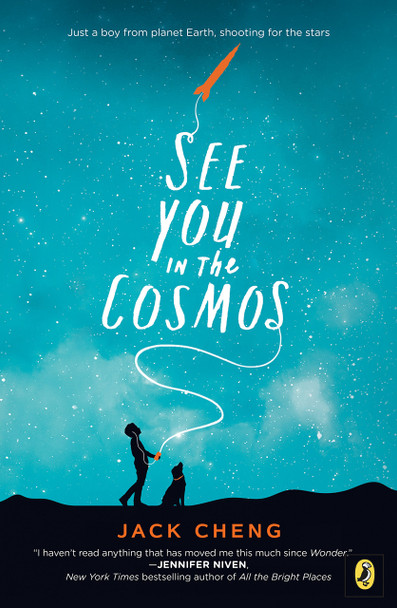 “I haven't read anything that has moved me this much since Wonder.” —Jennifer Niven, author of All the Bright Places

A space-obsessed boy and his dog, Carl Sagan, take a journey toward family, love, hope, and awe in this funny and moving novel for fans of Counting by 7s, Walk Two Moons, and The Curious Incident of the Dog in the Night-Time.

11-year-old Alex Petroski loves space and rockets, his mom, his brother, and his dog Carl Sagan—named for his hero, the real-life astronomer. All he wants is to launch his golden iPod into space the way Carl Sagan (the man, not the dog) launched his Golden Record on the Voyager spacecraft in 1977. From Colorado to New Mexico, Las Vegas to L.A., Alex records a journey on his iPod to show other lifeforms what life on earth, his earth, is like. But his destination keeps changing. And the funny, lost, remarkable people he meets along the way can only partially prepare him for the secrets he’ll uncover—from the truth about his long-dead dad to the fact that, for a kid with a troubled mom and a mostly not-around brother, he has way more family than he ever knew.

Jack Cheng’s debut is full of joy, optimism, determination, and unbelievable heart. To read the first page is to fall in love with Alex and his view of our big, beautiful, complicated world. To read the last is to know he and his story will stay with you a long, long time.

The book, See You in the Cosmos [Bulk, Wholesale, Quantity] ISBN# 9780399186387 in Paperback by Jack Cheng may be ordered in bulk quantities. Minimum starts at 25 copies. Availability based on publisher status and quantity being ordered.
View AllClose

MSRP:
Now:
As low as
Was:
Becky Albertalli meets Jenny Han in a smart, hilarious, black girl magic, own voices rom-com by a staggeringly talented new writer. Liz Lighty has always believed she's too black, too poor, too...

MSRP:
Now:
As low as
Was:
Everyone's favorite time-travelers are changing their styles! The Time Warp Trio series now features a brand-new, eye-catching design, sure to appeal to longtime fans, and those new to Jon Scieszka's...

See You at Harry's

MSRP:
Now:
As low as
Was:
Starting middle school brings all the usual challenges — until the unthinkable happens, and Fern and her family must find a way to heal. Twelve-year-old Fern feels invisible. It seems as though...

MSRP:
Now:
As low as
Was:
Cosmos is one of the bestselling science books of all time. In clear-eyed prose, Sagan reveals a jewel-like blue world inhabited by a life form that is just beginning to discover its own identity and...

If You Want to See a Whale [Hardcover]

MSRP:
Now:
As low as
Was:
Advises the reader about what to do, and not do, in order to successfully spot a whale, such as wrapping up in a not-too-cozy blanket, ignoring the roses, and especially, being patientThe book, If...

MSRP:
Now:
As low as
Was:
Running into the school to escape a hungry owl was easy. But with the door locked and an angry dog chasing him, how will Twitch the squirrel get back out? He'll need a hand, of course. . . . and...

MSRP:
Now:
As low as
Was:
In this, the original book about the curious monkey, George is taken from the jungle by the man in the yellow hat to live in a new home, but--oh, what happened! Though trying to be good, George is...

MSRP:
Now:
As low as
Was:
With more than 12 million books sold, bestselling author Dan Gutman's My Weird School series really gets kids reading! How did four strange teachers get into this little box? Meet a teacher who...

MSRP:
Now:
As low as
Was:
Part of the bestselling TouchThinkLearn series! TouchThinkLearn: Feelings is a tactile board book with scooped-out die-cuts and raised elements that invites little readers to explore a range of...

The Boy Who Made Everyone Laugh

MSRP:
Now:
As low as
Was:
When life is funny, make some jokes about it. Billy Plimpton has a big dream: to become a famous comedian when he grows up. He already knows a lot of jokes, but thinks he has one big problem...