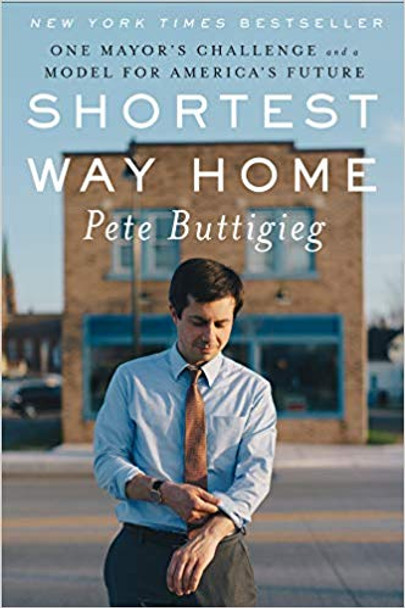 NEW YORK TIMES BESTSELLER "The best American political autobiography since Barack Obama’s Dreams from My Father." ―Charles Kaiser, The Guardian A mayor’s inspirational story of a Midwest city that has become nothing less than a blueprint for the future of American renewal. Once described by the Washington Post as “the most interesting mayor you’ve never heard of,” Pete Buttigieg, the thirty-seven-year-old mayor of South Bend, Indiana, has now emerged as one of the nation’s most visionary politicians. With soaring prose that celebrates a resurgent American Midwest, Shortest Way Home narrates the heroic transformation of a “dying city” (Newsweek) into nothing less than a shining model of urban reinvention. Interweaving two narratives―that of a young man coming of age and a town regaining its economic vitality―Buttigieg recounts growing up in a Rust Belt city, amid decayed factory buildings and the steady soundtrack of rumbling freight trains passing through on their long journey to Chicagoland. Inspired by John F. Kennedy’s legacy, Buttigieg first left northern Indiana for red-bricked Harvard and then studied at Oxford as a Rhodes Scholar, before joining McKinsey, where he trained as a consultant―becoming, of all things, an expert in grocery pricing. Then, Buttigieg defied the expectations that came with his pedigree, choosing to return home to Indiana and responding to the ultimate challenge of how to revive a once-great industrial city and help steer its future in the twenty-first century. Elected at twenty-nine as the nation’s youngest mayor, Pete Buttigieg immediately recognized that “great cities, and even great nations, are built through attention to the everyday.” As Shortest Way Home recalls, the challenges were daunting―whether confronting gun violence, renaming a street in honor of Martin Luther King Jr., or attracting tech companies to a city that had appealed more to junk bond scavengers than serious investors. None of this is underscored more than Buttigieg’s audacious campaign to reclaim 1,000 houses, many of them abandoned, in 1,000 days and then, even as a sitting mayor, deploying to serve in Afghanistan as a Navy officer. Yet the most personal challenge still awaited Buttigieg, who came out in a South Bend Tribune editorial, just before being reelected with 78 percent of the vote, and then finding Chasten Glezman, a middle-school teacher, who would become his partner for life. While Washington reels with scandal, Shortest Way Home, with its graceful, often humorous, language, challenges our perception of the typical American politician. In chronicling two once-unthinkable stories―that of an Afghanistan veteran who came out and found love and acceptance, all while in office, and that of a revitalized Rust Belt city no longer regarded as “flyover country”―Buttigieg provides a new vision for America’s shortest way home. br>
The book, Shortest Way Home: One Mayor's Challenge and a Model for America's Future [Bulk, Wholesale, Quantity] ISBN# 9781631494369 in Hardcover by Pete Buttigieg may be ordered in bulk quantities. Minimum starts at 25 copies. Availability based on publisher status and quantity being ordered.
View AllClose

MSRP:
Now:
As low as
Was:
Keeping the economy strong will require addressing two distinct but related problems. Steadily rising federal debt makes it harder to grow our economy, boost our living standards, respond to wars or...

MSRP:
Now:
As low as
Was:
A business leader and esteemed economic thinker outlines simple solutions to America’s five most pressing public policy issues, from healthcare to education to inequality. America today confronts a...

Future Home of the Living God

MSRP:
Now:
As low as
Was:
A New York Times Notable Book of 2017 Louise Erdrich, the New York Times bestselling, National Book Award-winning author of LaRose and The Round House, paints a startling portrait of a young woman...

One Nation: What We Can All Do to Save America's Future

MSRP:
Now:
As low as
Was:
Dear Reader, In February 2013 I gave a speech at the National Prayer Breakfast. Standing a few feet from President Obama, I warned my fellow citizens of the dangers facing our country and called for...

MSRP:
Now:
As low as
Was:
This mass market dictionary offers current Chinese vocabulary as it is spoken in China and up-to-date English vocabulary that reflects American English. This bilingual and bidirectional dictionary...

All In: How the Best Managers Create a Culture of Belief and Drive Big Results [Hardcover]

MSRP:
Now:
As low as
Was:
The authors of the bestsellers The Carrot Principleand The Orange Revolutionpresent groundbreaking new findings: In the highest-performing teams and companies, managers create a "culture of belief,"...

Lifescale: How to Live a More Creative, Productive, and Happy Life

MSRP:
Now:
As low as
Was:
Somewhere along the way, we got distracted. As much as we multitask, love our devices and feel like we’re in control, deep down we know that something is off. Shortened attention spans, declines in...

MSRP:
Now:
As low as
Was:
Thomas Rockwell's deliciously disgusting and enduring classic joins the Scholastic Gold line, now with exclusive bonus materials! Billy isn't one to back down from a bet. But this one is gross: If he...

This Beach Is Loud! (Little Senses)

MSRP:
Now:
As low as
Was:
Patience, understanding, and a soothing exercise saves the beach day when excitement turns to sensory overload for this child on the Autism Spectrum. A perfect book for any child with sensory...