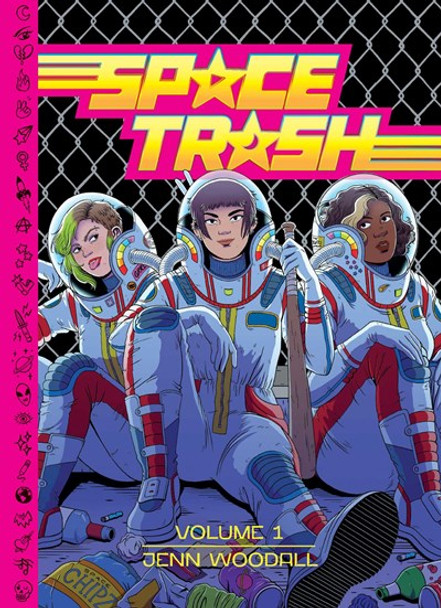 MSRP:
Now: List Price $21.99
Was:
— You save
Hardcover
This product qualifies for FREE US Ground Shipping on orders over $100.

In Jenn Woodall's debut graphic novel series, three teenagers attending school on the moon try to keep their boredom and resentments at bay as they stumble across an exciting secret that could change the course of their future.

In 2115, Earth has been abandoned as a lost cause and mankind has moved on to space colonization. At a decrepit high school on the moon for underprivileged youth, Stab, Yuki and Una are three teenagers who try to keep their boredom and resentment at bay by fighting rival gangs and cliques, hanging out, sleeping their way through class, all while trying to avoid punishment from the Student Council.

Fights over turf, respect and snacks lead to unearthing an exciting secret, but will their friendship be strong enough to forge a new future?

MSRP:
Now:
As low as
Was:
In an unnamed Third World country, in the not-so-distant future, three "dumpsite boys" make a living picking through the mountains of garbage on the outskirts of a large city. One unlucky-lucky day,...

Tracking Trash : Flotsam, Jetsam, and the Science of Ocean Motion

MSRP:
Now:
As low as
Was:
Aided by an army of beachcombers, oceanographer Dr. Curtis Ebbesmeyer tracks trash in the name of science. From sneakers to hockey gloves, Curt monitors the watery fate of human-made cargo that has...

MSRP:
Now:
As low as
Was:
LEVEL 5: READING FLUENTLY For readers fast developing in confidence and ability. There is more text than at level 4, with more difficult vocabulary, more sophisticated information, and a range of...

MSRP:
Now:
As low as
Was:
How soon can you board a rocketship to Mars? And how will you survive when you get there? There are so many challenges to overcome in sending a human into space, such as problems of distance, fuel,...

The Secret Letters (Mysteries of Trash and Treasure #1)

Where Tomorrows Aren't Promised: A Memoir of Survival and Hope

MSRP:
Now:
As low as
Was:
From iconic NBA All-Star Carmelo Anthony comes a raw and inspirational memoir about growing up in the housing projects of Red Hook and Baltimore—a brutal world Where Tomorrows Aren’t Promised. For...

MSRP:
Now:
As low as
Was:
"Life is beautiful! Life is wondrous! Every star above is shining just for us!" GRAMMY® Award-winning artist Keb’ Mo’ brings one of his beloved songs to life to remind us that life is beautiful...

MSRP:
Now:
As low as
Was:
The revolutionary StrengthsFinder assessment is back, new and improved! Discover your top five talents and refer to the personalized action-planning guide for strategies on building each talent. Your...

MSRP:
Now:
As low as
Was:
David Horsager’s critically acclaimed book The Trust Edge clearly breaks down a key concept every business professional should understand – the value of trust. Though the concept of “trust” may seem...

MSRP:
Now:
As low as
Was:
Make choices to defeat a mysterious sea monster in the first of a new series of innovative, interactive graphic novels from the award-winning creator of Meanwhile Adventuregame Comics is a new...

MSRP:
Now:
As low as
Was:
In the spirit of Thatcher’s quote, Ambassador Nikki R. Haley offers inspiring examples of women who worked against obstacles and opposition to get things done—including Haley herself. As a brown girl...