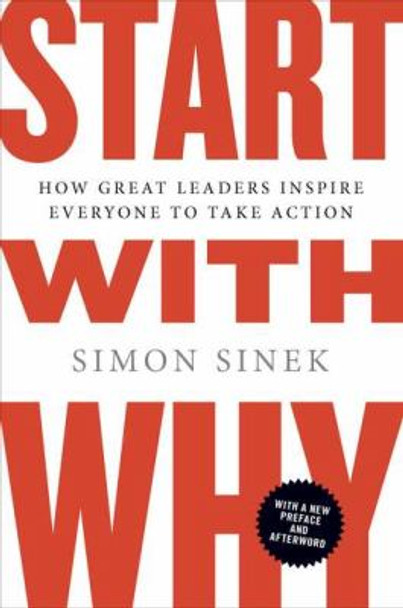 The inspiring, life-changing bestseller by the author of LEADERS EAT LAST and TOGETHER IS BETTER. In 2009, Simon Sinek started a movement to help people become more inspired at work, and in turn inspire their colleagues and customers. Since then, millions have been touched by the power of his ideas, including more than 28 million who’ve watched his TED Talk based on START WITH WHY -- the third most popular TED video of all time. Sinek starts with a fundamental question: Why are some people and organizations more innovative, more influential, and more profitable than others? Why do some command greater loyalty from customers and employees alike? Even among the successful, why are so few able to repeat their success over and over? People like Martin Luther King Jr., Steve Jobs, and the Wright Brothers had little in common, but they all started with WHY. They realized that people won't truly buy into a product, service, movement, or idea until they understand the WHY behind it. START WITH WHY shows that the leaders who've had the greatest influence in the world all think, act, and communicate the same way -- and it's the opposite of what everyone else does. Sinek calls this powerful idea The Golden Circle, and it provides a framework upon which organizations can be built, movements can be led, and people can be inspired. And it all starts with WHY. Watch Simon Sinek's 15-minute interview on Inside Quest:

The book, Start with Why: How Great Leaders Inspire Everyone to Take Action [Bulk, Wholesale, Quantity] ISBN# 9781591846444 in Paperback by Sinek, Simon may be ordered in bulk quantities. Minimum starts at 25 copies. Availability based on publisher status and quantity being ordered.
View AllClose

Inspire! What Great Leaders Do

MSRP:
Now:
As low as
Was:
Praise for Inspire! Inspire! What Great Leaders Do is a very important book. The ideas it contains have changed our lives and our organizations and the lives of tens of thousands of our employees. It...

Start with Why: How Great Leaders Inspire Everyone to Take Action

MSRP:
Now:
As low as
Was:
Why do you do what you do? Why are some people and organizations more innovative, more influential, and more profitable than others? Why do some command greater loyalty from customers and employees...

The Art of Action: How Leaders Close the Gaps Between Plans, Actions and Results

MSRP:
Now:
As low as
Was:
Examining the gap between what managers plan, what they do, and the outcomes they achieve, Stephen Bungay uses the nineteenth-century Prussian Army—and the unpredictable environment of the...

How to Be a Positive Leader: Small Actions, Big Impact

MSRP:
Now:
As low as
Was:
Positive leaders are able to dramatically expand their people’s—and their own—capacity for excellence. And they accomplish this without enormous expenditures or huge heroic gestures. Here leading...

Why Great Leaders Don't Take Yes for an Answer: Managing for Conflict and Consensus (2ND ed.)

MSRP:
Now:
As low as
Was:
Make better decisions! Michael A. Roberto will help you achieve deeper consensus, get past groupthink and "yes men," and achieve superior results in every decision you make -- especially your most...

Turn the Ship Around!: A True Story of Turning Followers into Leaders

MSRP:
Now:
As low as
Was:
Retired U.S. Navy Captain David Marquet knows a thing or two about leadership – to say the least. In his bestselling, must-have leadership book, Marquet tells the story of how he transformed one of...

MSRP:
Now:
As low as
Was:
A game-changing model for giving effective feedback to peers, employees, or even your boss--without offending or demotivating. How are you supposed to tell someone that they're not meeting...

Total Alignment: Tools and Tactics for Streamlining Your Organization

MSRP:
Now:
As low as
Was:
Total Alignment helps you define the vision and strategies that support your company’s mission and ensures that the roles, responsibilities, and goals of each member of your organization are clear...

HRH: So Many Thoughts on Royal Style

MSRP:
Now:
As low as
Was:
**A 2020 OWL AWARD LONGLIST WINNER IN THE GIFT & SPECIAL INTEREST CATEGORY**Veteran style journalist Elizabeth Holmes expands her popular Instagram series, So Many Thoughts, into a nuanced look...

I Am Human: A Book of Empathy

MSRP:
Now:
As low as
Was:
I am human I am a work in progress Striving to be the best version of ME From the picture book dream team behind I Am Yoga and I Am Peace comes the third book in their wellness series: I Am Human...

It Worked for Me: In Life and Leadership

MSRP:
Now:
As low as
Was:
Colin Powell, one of America’s most admired public figures, reveals the principles that have shaped his life and career in this inspiring and engrossing memoir. A beautiful companion to his previous...

The Turn the Ship Around! Workbook: Implement Intent-Based Leadership in Your Organization

MSRP:
Now:
As low as
Was:
Former U.S. Navy Captain David Marquet follows the success of his bestselling leadership book with a new revised and expanded companion workbook filled with practical leadership advice, tools, and...

Elmer and the Dragon (My Father's Dragon)

MSRP:
Now:
As low as
Was:
In this sequel to My Father's Dragon. Elmer and Boris's island hopping adventures continue. The book, Elmer and the Dragon [Bulk, Wholesale, Quantity] ISBN# 9780440421368 in Mass Market Paperback by...

The New Kid at School

MSRP:
Now:
As low as
Was:
The Dragon Slayers' Academy is back-and it's bigger and better than ever! The books have new covers and are now 112 pages long. Expanded from the old 96-page format, they now feature a fun Dragon...