Tears We Cannot Stop: A Sermon to White America [Hardcover] 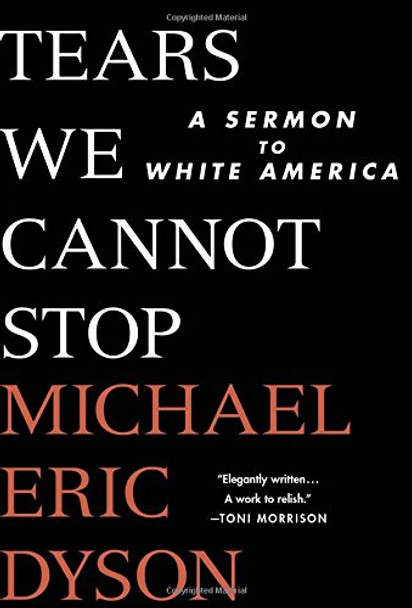 Tears We Cannot Stop: A Sermon to White America [Hardcover]

As the country grapples with racist division at a level not seen since the 1960s, one man's voice is heard above the rest. In his New York Times op-ed piece "Death in Black and White," Michael Eric Dyson moved a nation. Isabel Wilkerson called it "an unfiltered Marlboro of black pain" and "crushingly powerful," and Beyonce tweeted about it. Now he continues to speak out in Tears We Cannot Stop―a provocative and deeply personal call for change. Dyson argues that if we are to make real racial progress we must face difficult truths, including being honest about how black grievance has been ignored, dismissed, or discounted. In the tradition of James Baldwin's The Fire Next Time―short, emotional, literary, powerful―this is the book that all Americans who care about the current and long-burning crisis in race relations will want to read.

The book, Tears We Cannot Stop: A Sermon to White America [Bulk, Wholesale, Quantity] ISBN# 9781250135995 in Hardcover by Michael Eric Dyson may be ordered in bulk quantities. Minimum starts at 25 copies. Availability based on publisher status and quantity being ordered.
View AllClose

The Third Jesus: The Christ We Cannot Ignore

MSRP:
Now:
As low as
Was:
Who is Jesus? In The Third Jesus, Deepak Chopra provides an answer that is both uplifting and challenging to current beliefs. There is not one Jesus, Chopra writes, but three. The first is the...

All the Light We Cannot See

MSRP:
Now:
As low as
Was:
Winner of the Pulitzer Prize, a New York Times Book Review Top Ten Book, National Book Award finalist, more than two and a half years on the New York Times bestseller list From the highly acclaimed,...

All the Light We Cannot See: A Novel

MSRP:
Now:
As low as
Was:
WINNER OF THE PULITZER PRIZE From the highly acclaimed, multiple award-winning Anthony Doerr, the beautiful, stunningly ambitious instant New York Times bestseller about a blind French girl and a...

Beyond Biden: Rebuilding the America We Love

MSRP:
Now:
As low as
Was:
Bestselling author Newt Gingrich exposes the anti-American forces that have grown so large and so aggressive in their quest for power. The struggle between the defenders of America as an exceptional...

The Punic Wars: The History of the Conflict that Destroyed Carthage and Made Rome a Global Power

MSRP:
Now:
As low as
Was:
Carthage was one of the great ancient civilizations, and at its peak, the wealthy Carthaginian empire dominated the Mediterranean against the likes of Greece and Rome, with commercial enterprises and...

MSRP:
Now:
As low as
Was:
You know the authors' names. You recognize the title. You've probably used this book yourself. This is The Elements of Style, the classic style manual, now in a fourth edition. A new Foreword by...

Not a Fan Daily Devotional: 75 Days to Becoming a Completely Committed Follower of Jesus

MSRP:
Now:
As low as
Was:
Featuring all new content building on the mega bestseller Not a Fan, author and pastor Kyle Idleman dives deep into each of his principles from the original book and helps you see how you can live...

James and the Giant Peach: A Play

MSRP:
Now:
As low as
Was:
Roald Dahl fans will rejoice at the opportunity to bring their favorite books and characters to life. Five of Dahl’s hugely popular, beloved books have been adapted into winning plays for children...