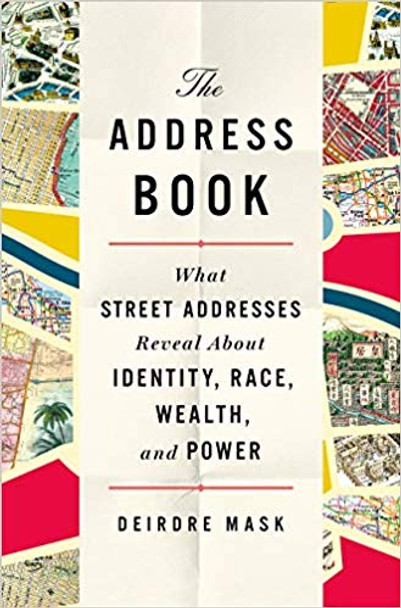 An extraordinary debut in the tradition of classic works from authors such as Mark Kurlansky, Mary Roach, and Rose George.

An exuberant and insightful work of popular history of how streets got their names, houses their numbers, and what it reveals about class, race, power, and identity.

When most people think about street addresses, if they think of them at all, it is in their capacity to ensure that the postman can deliver mail or a traveler won’t get lost. But street addresses were not invented to help you find your way; they were created to find you. In many parts of the world, your address can reveal your race and class.

In this wide-ranging and remarkable book, Deirdre Mask looks at the fate of streets named after Martin Luther King Jr., the wayfinding means of ancient Romans, and how Nazis haunt the streets of modern Germany. The flipside of having an address is not having one, and we also see what that means for millions of people today, including those who live in the slums of Kolkata and on the streets of London.

Filled with fascinating people and histories, The Address Book illuminates the complex and sometimes hidden stories behind street names and their power to name, to hide, to decide who counts, who doesn’t―and why.

The book, The Address Book: What Street Addresses Reveal About Identity, Race, Wealth, and Power [Bulk, Wholesale, Quantity] ISBN# 9781250134769 in Hardcover by Deirdre Mask may be ordered in bulk quantities. Minimum starts at 25 copies. Availability based on publisher status and quantity being ordered.
View AllClose

Smart Business: What Alibaba's Success Reveals about the Future of Strategy

MSRP:
Now:
As low as
Was:
Leaders already know that the classic approach to strategy--analyze, plan, execute--is losing relevance. But they don't yet know what replaces it. As everyone and everything becomes more...

We Need to Talk: A Memoir about Wealth [Hardcover]

MSRP:
Now:
As low as
Was:
When Jennifer Risher joined Microsoft in 1991, she met her husband, and with him became an extra-lucky beneficiary of the dot-com boom. By their early thirties, they had tens of millions of dollars...

Why Wakanda Matters: What Black Panther Reveals about Psychology, Identity, and Communication

MSRP:
Now:
As low as
Was:
In 2018, the Marvel Cinematic Universe finally delivered on something fans had long been waiting for: a feature film with a solo Black superhero. Black Panther introduced viewers to the stunning...

The Address Book: What Street Addresses Reveal about Identity, Race, Wealth, and Power

MSRP:
Now:
As low as
Was:
Finalist for the 2020 Kirkus Prize for Nonfiction | One of Time Magazines's 100 Must-Read Books of 2020 | Finalist for the Goodreads Choice Awards, Best History & Biography 2020 | Longlisted for...

MSRP:
Now:
As low as
Was:
Super Founders uses a data-driven approach to understand what really differentiates billion-dollar startups from the rest—revealing that nearly everything we thought was true about them is false! ...

MSRP:
Now:
As low as
Was:
Revised and updated, the Scholastic Student Thesaurus is an innovative, easy-to-use title for students in grades 6-12. This new edition features a unique on-the-page index and four brand-new pages of...

The Healing Organization: Awakening the Conscience of Business to Help Save the World

MSRP:
Now:
As low as
Was:
The image of modern corporations has been shaped by a focus on profits over people and the environment, but this approach to capitalism is no longer viable. We are at an inflection point where...

The Influence Effect: A New Path to Power for Women Leaders

MSRP:
Now:
As low as
Was:
Women hold over half of all professional jobs today, yet they represent just four percent of CEOs in the S&P 500. Even worse, that percentage has barely budged in a decade. That's where The Influence...

The Right to Lead: Learning Leadership Through Character and Courage

MSRP:
Now:
As low as
Was:
John Maxwell offers key principles, stories, and reflections on preparing a leader's mind and heart to lead both themselves and others. Leadership is something you learn and earn the right to do. ...

MSRP:
Now:
As low as
Was:
A great introduction to simple, fun mysteries for beginning readers! Katie Fry may be little, but she's got a big brain, and she uses it to solve mysteries. So when she finds a very cute, VERY lost...