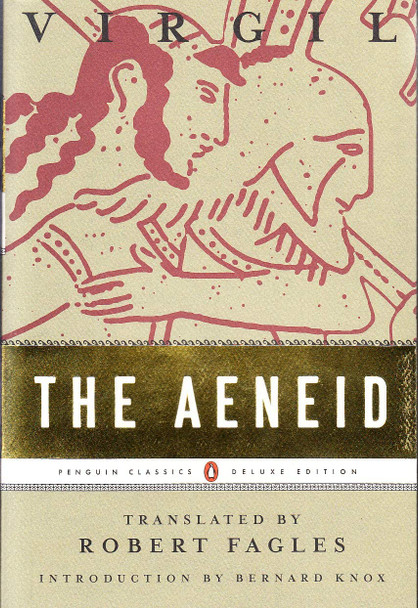 MSRP:
Now: List Price $19.00
Was:
— You save
Paperback
This product qualifies for FREE US Ground Shipping on orders over $100.

Fleeing the ashes of Troy, Aeneas, Achilles’ mighty foe in the Iliad, begins an incredible journey to fulfill his destiny as the founder of Rome. His voyage will take him through stormy seas, entangle him in a tragic love affair, and lure him into the world of the dead itself--all the way tormented by the vengeful Juno, Queen of the Gods. Ultimately, he reaches the promised land of Italy where, after bloody battles and with high hopes, he founds what will become the Roman empire. An unsparing portrait of a man caught between love, duty, and fate, the Aeneid redefines passion, nobility, and courage for our times. Robert Fagles, whose acclaimed translations of Homer’s Iliad and Odyssey were welcomed as major publishing events, brings the Aeneid to a new generation of readers, retaining all of the gravitas and humanity of the original Latin as well as its powerful blend of poetry and myth. Featuring an illuminating introduction to Virgil’s world by esteemed scholar Bernard Knox, this volume lends a vibrant new voice to one of the seminal literary achievements of the ancient world.

For more than seventy years, Penguin has been the leading publisher of classic literature in the English-speaking world. With more than 1,700 titles, Penguin Classics represents a global bookshelf of the best works throughout history and across genres and disciplines. Readers trust the series to provide authoritative texts enhanced by introductions and notes by distinguished scholars and contemporary authors, as well as up-to-date translations by award-winning translators.

The book, The Aeneid: (Penguin Classics Deluxe Edition) [Bulk, Wholesale, Quantity] ISBN# 9780143105138 in Paperback by Virgil may be ordered in bulk quantities. Minimum starts at 25 copies. Availability based on publisher status and quantity being ordered.
View AllClose

MSRP:
Now:
As low as
Was:
In celebration of the Shirley Jackson centennial, a Penguin Classics Deluxe Edition of the greatest haunted house story ever written First published in 1959, Shirley Jackson’s The Haunting of Hill...

MSRP:
Now:
As low as
Was:
The great war epic of Western literature, translated by acclaimed classicist Robert Fagles, and featured in the Netflix series The OA A Penguin Classic Dating to the ninth century B.C., Homer's...

MSRP:
Now:
As low as
Was:
In the Bhagavad Gita, Prince Arjuna asks direct, uncompromising questions of his spiritual guide on the eve of a great battle. In this best-selling and expanded edition of the most famous --and...

MSRP:
Now:
As low as
Was:
A quirky story with a kid's-eye view of the curious ways people behave in groups. In a field outside the city, a group of children are playing a simple game. They run after a kicked ball, then throw...

MSRP:
Now:
As low as
Was:
Part starter-kit, part encyclopedia, and part inspiration, Self-Made Boss is an essential survival guide for small businesses When it comes to getting practical advice, small business owners...

A Long Way Gone: Memoirs of a Boy Soldier [Paperback]

MSRP:
Now:
As low as
Was:
Written by a former child soldier, A Long Way Gone offers a first-hand account of the horror and struggle that these children go through, often not surviving past childhood. Yet Ishmael Beah is still...

The Lion, the Witch and the Wardrobe [Mass Market Paperback]

MSRP:
Now:
As low as
Was:
A beloved classic for decades, The Lion, the Witch and the Wardrobe is the second installment in the Chronicles of Narnia series by C.S. Lewis. A beautiful story filled with fantasy, but grounded in...

Solve for Happy: Engineer Your Path to Joy [Paperback]

MSRP:
Now:
As low as
Was:
**A 2017 OWL AWARD LONGLIST WINNER** In this “powerful personal story woven with a rich analysis of what we all seek” (Sergey Brin, cofounder of Google), Mo Gawdat, Chief Business Officer...

MSRP:
Now:
As low as
Was:
For nearly two generations, Gia-fu Feng and Jane English's translation of the Tao Te Chinghas been the standard for those seeking access to the wisdom of Taoist thought. Now Jane English and her...

Everybody Needs a Rock [Picture Book]

MSRP:
Now:
As low as
Was:
Everybody needs a rock -- at least that's the way this particular rock hound feels about it in presenting her own highly individualistic rules for finding just the right rock for you.... The book,...