The African Trilogy: Things Fall Apart; Arrow of God; No Longer at Ease 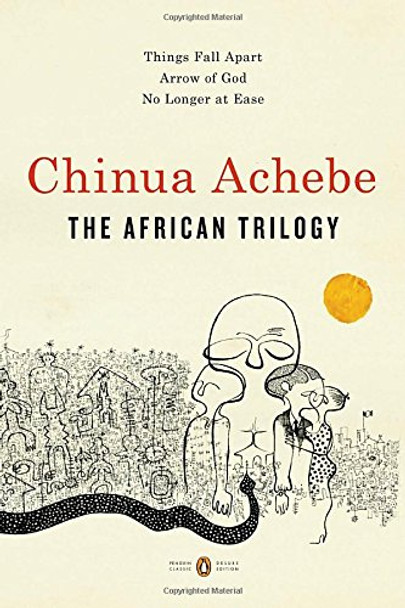 The African Trilogy: Things Fall Apart; Arrow of God; No Longer at Ease

MSRP:
Now: List Price $25.00
Was:
— You save
Paperback
This product qualifies for FREE US Ground Shipping on orders over $100.

Chinua Achebe is considered the father of modern African literature, the writer who "opened the magic casements of African fiction." The African Trilogy--comprised of Things Fall Apart, Arrow of God, and No Longer at Ease--is his magnum opus. In these masterly novels, Achebe brilliantly imagines the lives of three generations of an African community as their world is upended by the forces of colonialism from the first arrival of the British to the waning days of empire. The trilogy opens with the groundbreaking Things Fall Apart, the tale of Okonkwo, a hero in his village, whose clashes with missionaries--coupled with his own tragic pride--lead to his fall from grace. Arrow of God takes up the ongoing conflict between continuity and change as Ezeulu, the headstrong chief priest, finds his authority is under threat from rivals and colonial functionaries. But he believes himself to be untouchable and is determined to lead his people, even if it is towards their own destruction. Finally, in No Longer at Ease, Okonkwo's grandson, educated in England, returns to a civil-service job in Lagos, only to see his morality erode as he clings to his membership in the ruling elite. Drawing on the traditional Igbo tales of Achebe's youth, The African Trilogy is a literary landmark, a mythic and universal tale of modern Africa. As Toni Morrison wrote, "African literature is incomplete and unthinkable without the works of Chinua Achebe. For passion, intellect and crystalline prose, he is unsurpassed."

The book, The African Trilogy: Things Fall Apart; Arrow of God; No Longer at Ease [Bulk, Wholesale, Quantity] ISBN# 9780143131342 in Paperback by Chinua Achebe may be ordered in bulk quantities. Minimum starts at 25 copies. Availability based on publisher status and quantity being ordered.
View AllClose

No Longer at Ease

MSRP:
Now:
As low as
Was:
A classic story of moral struggle in an age of turbulent social change and the final book in Chinua Achebe’s The African Trilogy When Obi Okonkwo, grandson of Okonkwo, the main character in Things...

MSRP:
Now:
As low as
Was:
In publication for more than 50 years, Things Fall Apart tells both a modern story and an ancient one. The common thread in Chinua Achebe’s classic story is Okonkwo, one of the principal members in...

MSRP:
Now:
As low as
Was:
THINGS FALL APART tells two overlapping, intertwining stories, both of which center around Okonkwo, a “strong man” of an Ibo village in Nigeria. The first of these stories traces Okonkwo's fall from...

MSRP:
Now:
As low as
Was:
The second novel in Chinua Achebe’s masterful African trilogy, following Things Fall Apart and preceding No Longer at Ease When Things Fall Apart ends, colonial rule has been introduced to Umuofia,...

MSRP:
Now:
As low as
Was:
The book, Things Fall Apart [ Bulk Wholesale Quantity ] ISBN 385474547 in by Achebe, Chinua may be ordered in bulk quantities . Bulk book availability based on publisher status and quantity being...

MSRP:
Now:
As low as
Was:
Coretta Scott King Award-winning illustrator Bryan Collier discovers the vibrant world of Harlem, New York, as seen through the eyes of a little boy "Uptown . . . Harlem, New York. Chicken and...

MSRP:
Now:
As low as
Was:
"Wholly original and captivating." - Brigid Kemmerer, New York Times bestselling author of A Curse So Dark and Lonely Girls team up to overthrow the kingdom in this unique and powerful retelling of...

The Christian Mind: How Should a Christian Think?

MSRP:
Now:
As low as
Was:
In this now classic book, noted scholar and author Harry Blamires perceptively diagnoses some of the weaknesses besetting the church with insights as fresh and relevant today as they were in the...

MSRP:
Now:
As low as
Was:
Common-Sense, Purpose-Based Investing for Your Retirement with Steps and Strategies to Help You. This book begins with the idea that when we reach the age of 50, we need to change from a portfolio...

MSRP:
Now:
As low as
Was:
Dr. Fuhrman's scientifically proven system enables you to finally conquer your cravings and food addictions, while steering your taste buds toward healthier food choices. But be aware of the side...