The Chance to Fly 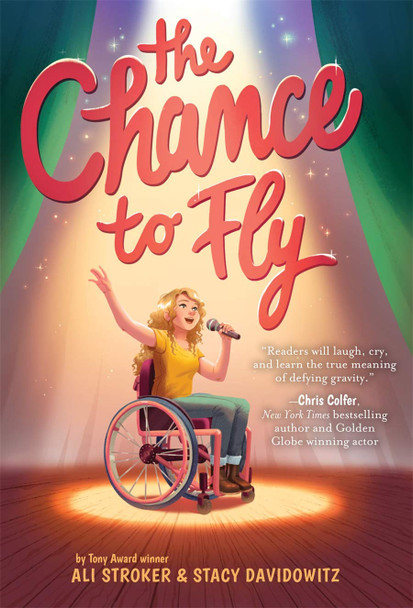 The Chance to Fly

Thirteen-year-old Nat Beacon loves a lot of things: her dog Warbucks, her best friend Chloe, and competing on her wheelchair racing team, the Zoomers, to name a few. But there’s one thing she’s absolutely OBSESSED with: MUSICALS! From Hamilton to Les Mis, there’s not a cast album she hasn’t memorized and belted along to. She’s never actually been in a musical though, or even seen an actor who uses a wheelchair for mobility on stage. Would someone like Nat ever get cast?

But when Nat’s family moves from California to New Jersey, Nat stumbles upon auditions for a kids’ production of Wicked, one of her favorite musicals ever! And she gets into the ensemble! The other cast members are super cool and inclusive (well, most of them)— especially Malik, the male lead and cutest boy Nat’s ever seen. But when things go awry a week before opening night, will Nat be able to cast her fears and insecurities aside and “Defy Gravity” in every sense of the song title?

The book, The Chance to Fly [Bulk, Wholesale, Quantity] ISBN# 9781419743931 in Hardcover by Ali Stroker;Stacy Davidowitz may be ordered in bulk quantities. Minimum starts at 25 copies. Availability based on publisher status and quantity being ordered.
View AllClose

MSRP:
Now:
As low as
Was:
A moving middle-grade novel from the Newbery Honor author of "Rules." When Lucy's family moves to an old house on a lake, Lucy tries to see her new home through her camera's lens, as her father has...

MSRP:
Now:
As low as
Was:
After a stormy night, a farmer, searching for his lost calf, finds a baby eagle that has been blown out of its nest. He takes it home and raises it with his chickens. When a friend comes to visit one...

MSRP:
Now:
As low as
Was:
In this fun-filled story based on the Disney classic, Dumbo learns what can happen when he tries to fly. From clowning in the circus to doing loop-the-loops, Dumbo's antics will fill kids with...

MSRP:
Now:
As low as
Was:
The fifth book in an award-winning, easy-to-read series about a boy and his pet fly, each book in the series has a fun foil cover! Mom and Dad won't let Fly Guy go along on the family road trip...

MSRP:
Now:
As low as
Was:
Fly Guy and Fly Girl have a scary SURPRIZZZE in the park! Buzz and Fly Guy see Liz and Fly Girl in the park. Up in a tree, they meet a boy named Carlos, who introduces them to his pet lizard, Annie...

MSRP:
Now:
As low as
Was:
In this full-color middle grade graphic memoir for fans of Raina Telgemeier and Jerry Craft, Yehudi Mercado draws inspiration from his childhood struggle with his weight while finding friendship with...

MSRP:
Now:
As low as
Was:
Bea loves lions and knows everything there is to know about them. She lives by the beach, but she doesn't like sand one little bit! One day, her mother persuades her to visit the beach, where she...

Other Words for Home [Paperback]

MSRP:
Now:
As low as
Was:
New York Times bestseller and Newbery Honor Book! A gorgeously written, hopeful middle grade novel in verse about a young girl who must leave Syria to move to the United States, perfect for fans...

MSRP:
Now:
As low as
Was:
Llama Llama learns to swim in this sweet 8x8 based on an episode from the Netflix animated television series. Look out, world--Llama Llama is a TV star! The beloved character, made famous by Anna...

How Boards Work: And How They Can Work Better in a Chaotic World

MSRP:
Now:
As low as
Was:
A New York Times bestselling author and veteran board member offers an insider's view of corporate boards, their struggles, and why they must adapt to survive. Corporate boards are under great...

MSRP:
Now:
As low as
Was:
Zoom, zoom, zoom, we’re going to the moon! Your little astronaut will love exploring the wonders of space in this fun pop-up book! 5,4,3,2,1 – blast off! Go on an out-of-this-world adventure with...

Everything Sad Is Untrue: (A True Story)

MSRP:
Now:
As low as
Was:
A sprawling, evocative, and groundbreaking autobiographical novel told in the unforgettable and hilarious voice of a young Iranian refugee. It is a powerfully layered novel that poses the questions:...

MSRP:
Now:
As low as
Was:
The #1 bestselling Magic Tree House series is ready to whisk you away through time with Jack and Annie--this time to the Yosemite National Park! The magic tree house whisks Jack and Annie to the...

Where the Red Fern Grows [Paperback]

MSRP:
Now:
As low as
Was:
For fans of Old Yeller and Shiloh, Where the Red Fern Grows is a beloved classic that captures the powerful bond between man and man’s best friend. Billy has long dreamt of owning not one, but...