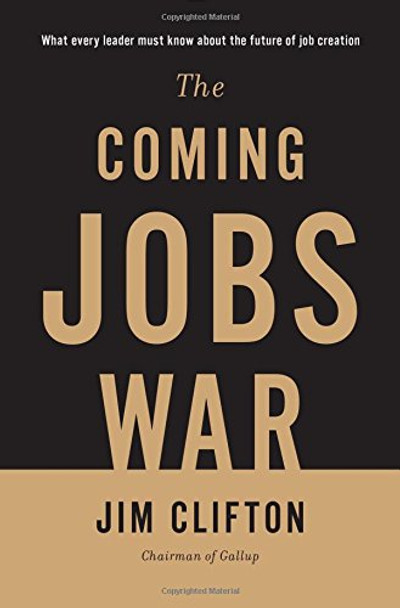 Definitive leadership strategy for fixing the American economy, drawn from Gallup’s unmatched global polling and written by the company’s chairman.

What everyone in the world wants is a good job. “This is one of the most important discoveries Gallup has ever made,” says the company’s Chairman, Jim Clifton.

In The Coming Jobs War, Clifton makes the bold assertion that job creation and successful entrepreneurship are the world’s most pressing issues right now, outpacing runaway government spending, environmental degradation and even the threat of global terrorism.

The book is grounded in findings from Gallup’s World Poll, which reveals the implications of the jobs war on everything from economics to foreign policy to nothing less than America’s moral authority in the world. And it offers a prescription for attacking the jobs issue head-on. Clifton argues that the solution to creating good jobs must be found in cities, not in the federal government. Promoting entrepreneurship and job creation must be the sole mission and purpose of cities’ business leaders, government officials and philanthropists.

Clifton says that the next big breakthrough will come from the combination of the forces within big cities, great universities and powerful local leaders. Their combined effect is the most reliable, controllable and predictable solution to America’s biggest problem. Strong leadership teams and a natural order are already in place within cities — in governments and local business and philanthropic entities, with caring leaders working on initiatives to fuel local economic growth and to create good jobs. The feat these leaders have to pull off is doubling their entrepreneurial energy by aligning their local forces: local tribal leaders, super mentors and universities.

Winning the jobs war will require all hands on deck, and failure is not an option, especially for the United States, which has been the global leader in promoting freedom and entrepreneurship. America’s place in the world is at stake, and there are other countries poised to surpass a sputtering U.S. economy that is currently growing at only 2% annually. The biggest threat? China, with a GDP that is increasing at nearly 10% annually — a pace that will make it the world’s leading and most influential economy within the next 30 years. While the statistics are dire, Clifton remains optimistic about America’s ability to win the jobs war because America has been here before. “The Greatest Generation saved America by beating the Japanese and Germans at [World War II]. The Baby Boomers saved America a second time by beating the same foes, Japan and Germany, in an economic war that determined the leadership of the free world, again,” he says.

The book, The Coming Jobs War [Bulk, Wholesale, Quantity] ISBN# 9781595620552 in Hardcover by Jim Clifton may be ordered in bulk quantities. Minimum starts at 25 copies. Availability based on publisher status and quantity being ordered.
View AllClose

MSRP:
Now:
As low as
Was:
**A 2019 OWL AWARD SHORTLIST WINNER IN THE POLITICS & CURRENT EVENTS CATEGORY**THIS IS A WITCH HUNT. WE'RE WITCHES, AND WE'RE HUNTING YOU. From the moment powerful men started falling to the...

Becoming Steve Jobs: The Evolution of a Reckless Upstart Into a Visionary Leader

MSRP:
Now:
As low as
Was:
There have been many books... The book, Becoming Steve Jobs: The Evolution of a Reckless Upstart Into a Visionary Leader [Bulk, Wholesale, Quantity] ISBN# 9780385347402 in Hardcover by Schlender,...

The Robots Are Coming!: The Future of Jobs in the Age of Automation

MSRP:
Now:
As low as
Was:
Staying true to his trademark journalistic approach, Andrés Oppenheimer takes his readers on yet another journey, this time across the globe, in a thought-provoking search to understand what the...

MSRP:
Now:
As low as
Was:
From the critically acclaimed author of Allegedly, Tiffany D. Jackson, comes a gripping new novel perfect for fans of E. Lockhart and Gillian Flynn about the mystery of one teenage girl’s...

MSRP:
Now:
As low as
Was:
A street smart, inspiring, practical and utterly honest book for renewing or resuming your career. Millions of mid- and late-career professionals are wondering why our careers are dying. We've been...

MSRP:
Now:
As low as
Was:
Are you ready for some brand-new fun—at school? These cuddly critters have got their school supplies and are ready for big adventures! Help your own little learner look forward to exciting activities...

Reset: My Fight for Inclusion and Lasting Change

MSRP:
Now:
As low as
Was:
The “necessary and incisive” (Roxane Gay) account of the discrimination case that “has blown open a conversation about the status of women” in the workplace (The New York Times) In 2015, Ellen K. Pao...

C Is for Country

MSRP:
Now:
As low as
Was:
Parents who play Grammy winner Lil Nas X's 12-times platinum single Old Town Road on repeat will want to take their kids and ride on over to this ABC picture book from the music mega-star! A is for...

The Language of Leadership: How to Engage and Inspire Your Team

MSRP:
Now:
As low as
Was:
The impression you make as a leader has the power to build, enhance, or sabotage your authority and your ideas--discover how to convey the essence of leadership in your every interaction. Most books...