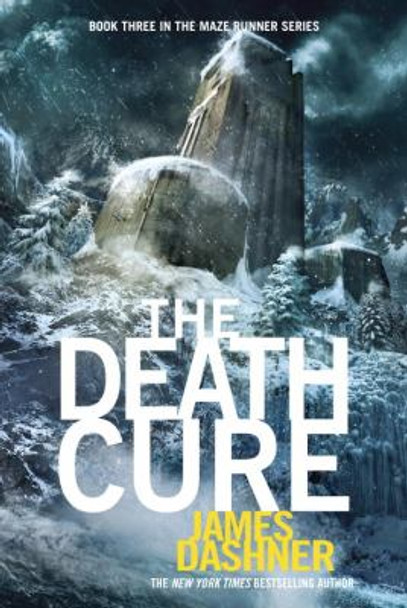 Book three in the blockbuster Maze Runner series that spawned a movie franchise and ushered in a worldwide phenomenon! And don’t miss The Fever Code, the highly-anticipated series conclusion that finally reveals the story of how the maze was built! It’s the end of the line. WICKED has taken everything from Thomas: his life, his memories, and now his only friends—the Gladers. But it’s finally over. The trials are complete, after one final test. Will anyone survive? What WICKED doesn’t know is that Thomas remembers far more than they think. And it’s enough to prove that he can’t believe a word of what they say. The truth will be terrifying. Thomas beat the Maze. He survived the Scorch. He’ll risk anything to save his friends. But the truth might be what ends it all. The time for lies is over. The Maze Runner and Maze Runner: The Scorch Trials are now major motion pictures featuring the star of MTV's Teen Wolf, Dylan O’Brien; Kaya Scodelario; Aml Ameen; Will Poulter; and Thomas Brodie-Sangster. The third movie, Maze Runner: The Death Cure, will hit screens in 2018.

The book, The Death Cure (Maze Runner Trilogy #3) [Bulk, Wholesale, Quantity] ISBN# 9780385738781 in Paperback by Dashner, James may be ordered in bulk quantities. Minimum starts at 25 copies. Availability based on publisher status and quantity being ordered.
View AllClose

MSRP:
Now:
As low as
Was:
Perfect for fans of Divergent and The Hunger Games, this special movie tie-in edition of the first book in the #1 New York Times bestselling Maze Runner series, The Maze Runner, features an...

MSRP:
Now:
As low as
Was:
When Thomas wakes up in the lift, the only thing he can remember is his first name. His memory is blank. But he's not alone. When the lift's doors open, Thomas finds himself surrounded by kids who...

MSRP:
Now:
As low as
Was:
Read the second book in the #1 New York Times bestselling Maze Runner series that is now a major motion picture and is perfect for fans of The Hunger Games and Divergent. The first book, The Maze...

MSRP:
Now:
As low as
Was:
Read the first book in the #1 New York Times bestselling Maze Runner series, perfect for fans of The Hunger Games and Divergent. The Maze Runner, and its sequel The Maze Runner: The Scorch Trials,...

The Fourth Age: Smart Robots, Conscious Computers, and the Future of Humanity

MSRP:
Now:
As low as
Was:
“The Fourth Age not only discusses what the rise of A.I. will mean for us, it also forces readers to challenge their preconceptions. And it manages to do all this in a way that is both entertaining...

MSRP:
Now:
As low as
Was:
Sofia wants to make her grandma's birthday extra special. With the help of her cousins, she has the perfect plan. But an uninvited helper might ruin the entire surprise. The book, Abuela's Birthday...

MSRP:
Now:
As low as
Was:
This "beautiful novel . . . has echoes of The Great Gatsby": an immigrant father and his son search for belonging—in post-Trump America, and with each other (Dwight Garner, New York Times). One of...

The 4 Disciplines of Execution: Updated and Expanded: Achieving Your Wildly Important Goals

MSRP:
Now:
As low as
Was:
#1 Wall Street Journal bestseller with more than 500,000 copies sold, The 4 Disciplines of Execution: Revised and Updated will radically change your business. For fans of Good to Great and The First...

Courage Goes to Work: How to Build Backbones, Boost Performance, and Get Results [Hardcover]

MSRP:
Now:
As low as
Was:
Courage Goes to Work has practical ideas and approaches for every manager who has ever struggled with how to encourage employees to develop and show more backbone. This book helps managers inspire...

MSRP:
Now:
As low as
Was:
Celebrating 40 years of the best-selling guide for coping with life's changes, named one of the 50 all-time best books in self-help and personal development -- with a new Discussion Guide for...

MSRP:
Now:
As low as
Was:
An uproarious indictment of Donald Trump's lying, cheating, and poor sportsmanship--by the bestselling author and acclaimed sportswriter. Commander in Cheat: How Golf Explains Trump is an...

Braving the Wilderness: The Quest for True Belonging and the Courage to Stand Alone [Paperback]

MSRP:
Now:
As low as
Was:
#1 NEW YORK TIMES BESTSELLER • A timely and important book that challenges everything we think we know about cultivating true belonging in our communities, organizations, and culture, from the #1...

MSRP:
Now:
As low as
Was:
Through the eyes of Lemuel Gulliver, Swift's unforgettable satire takes readers into worlds formerly unimagined. Visit four strange and remarkable lands: Lilliput, where Gulliver seems a giant among...