The Diary of a Young Girl: The Definitive Edition 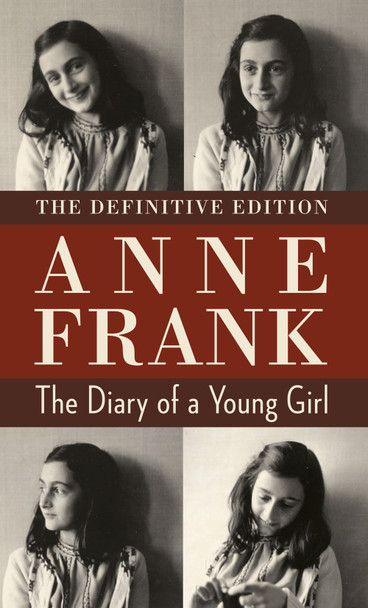 The Diary of a Young Girl: The Definitive Edition

MSRP:
Now: List Price $7.99
Was:
— You save
Mass Market Paperback
This product qualifies for FREE US Ground Shipping on orders over $100.

The beloved classic now repackaged and updated to include 48 pages of additional material—including an introduction from Eleanor Roosevelt now only available in this definitive edition.

Discovered in the attic in which she spent the last years of her life, Anne Frank's remarkable diary has since become a world classic--a powerful reminder of the horrors of war and an eloquent testament to the human spirit.

In 1942, with Nazis occupying Holland, a thirteen-year-old Jewish girl and her family fled their home in Amsterdam and went into hiding. For the next two years, until their whereabouts were betrayed to the Gestapo, they and another family lived cloistered in the "Secret Annex" of an old office building. Cut off from the outside world, they faced hunger, boredom, the constant cruelties of living in confined quarters, and the ever-present threat of discovery and death. In her diary Anne Frank recorded vivid impressions of her experiences during this period. By turns thoughtful, moving, and amusing, her account offers a fascinating commentary on human courage and frailty and a compelling self-portrait of a sensitive and spirited young woman whose promise was tragically cut short.

The book, The Diary of a Young Girl: The Definitive Edition [Bulk, Wholesale, Quantity] ISBN# 9780553577129 in Mass Market Paperback by Anne Frank;Otto M. Frank;Mirjam Pressler (Editor);Susan Massotty (Translator) may be ordered in bulk quantities. Minimum starts at 25 copies. Availability based on publisher status and quantity being ordered.
View AllClose

The Diary of a Young Girl [Hardcover]

MSRP:
Now:
As low as
Was:
This edition reprints the version authorized by the Frank estate, and includes a new Introduction, a Bibliography, and a chronology of Anne Frank's life and timesThe book, The Diary of a Young Girl...

MSRP:
Now:
As low as
Was:
This young readers' edition of Kline's #1 "New York Times"-bestselling novel "Orphan Train" follows a 12-year-old foster girl who forms an unlikely bond with a 91-year old woman who rode an orphan...

MSRP:
Now:
As low as
Was:
A young girl's journal records her family's struggles during two years of hiding from the Nazis in war-torn Holland. The book, Anne Frank: The Diary Of A Young Girl (Turtleback School & Library...

The Diary of a Young Girl

MSRP:
Now:
As low as
Was:
The basis for and official tie-in edition to the PBS Masterpiece Classic movie titled The Diary of Anne Frank, directed by Jon Jones from a screenplay by Deborah Moggach. First airing April 11, 2010...

MSRP:
Now:
As low as
Was:
From #1 New York Times bestselling author and rom-com queen Becky Albertalli comes a buoyant new novel about daring to step out of the shadows and into the spotlight in love, life, and, yes, theater...

MSRP:
Now:
As low as
Was:
On the surface, Riverview High School looks like the post-racial ideal. Serving an enviably affluent, diverse, and liberal district, the school is well-funded, its teachers are well-trained, and many...

Greater Fortune: Essential Lessons from the Entrepreneur Who Bought the Company That Fired Her [Hardcover]

MSRP:
Now:
As low as
Was:
When she refused to take a pay cut, Marie Cosgrove was cut loose. So she started her own business . . . and a few years later, she bought the company that had fired her. She didn't give up—she...

News of the World [Hardcover]

MSRP:
Now:
As low as
Was:
It is 1870 and Captain Jefferson Kyle Kidd travels through northern Texas, giving live readings to paying audiences hungry for news of the world. An elderly widower who has lived through three wars...

MSRP:
Now:
As low as
Was:
A singular, beautifully written coming-of-age memoir of a Filipino boy with albinism whose story travels from an immigrant childhood to Harvard to a gender transition and illuminates the illusions of...

Blue-Collar Cash: Love Your Work, Secure Your Future, and Find Happiness for Life

MSRP:
Now:
As low as
Was:
A prescriptive and timely guide to finding success and happiness without a college degree by Ken Rusk, the Ohio-based entrepreneur and “million-dollar ditch digger” who believes it is time to...

MSRP:
Now:
As low as
Was:
This high-quality Spanish-language book can be enjoyed by fluent Spanish speakers as well as those learning the language, whether at home or in a classroom. Harry es un perrito blanco con manchas...

MSRP:
Now:
As low as
Was:
A clever little fish named Nadarin, the only black fish in a school of red ones, devises a way to protect them all from their natural enemies. The book, Nadarin [Bulk, Wholesale, Quantity] ISBN#...

The Hill We Climb: An Inaugural Poem for the Country

MSRP:
Now:
As low as
Was:
Amanda Gorman’s powerful and historic poem “The Hill We Climb,” read at President Joe Biden’s inauguration, is now available as a collectible gift edition. “Stunning.” —CNN “Dynamic.”...