The Empire of Dreams 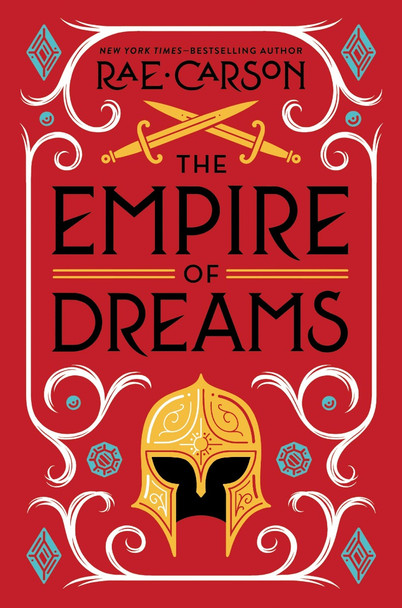 The Empire of Dreams

New York Times–bestselling author Rae Carson makes a triumphant return to the world of her award-winning Girl of Fire and Thorns trilogy in this extraordinary stand-alone novel. Fans of Leigh Bardugo, Kendare Blake, and Tomi Adeyemi won’t want to put this book down.

Red Sparkle Stone is a foundling orphan with an odd name, a veiled past, and a mark of magic in her hair. But finally―after years and years of running, of fighting―she is about to be adopted into the royal family by Empress Elisa herself. She’ll have a home, a family. Sixteen-year-old Red can hardly believe her luck. Then, in a stunning political masterstroke, the empress’s greatest rival blocks the adoption, and everything Red has worked for crumbles before her eyes.

But Red is not about to let herself or the empress become a target again. Determined to prove her worth and protect her chosen family, she joins the Royal Guard, the world’s most elite fighting force. It’s no coincidence that someone wanted her to fail as a princess, though. Someone whose shadowy agenda puts everything―and everyone―she loves at risk. As danger closes in, it will be up to Red to save the empire. If she can survive recruitment year―something no woman has ever done before.

New York Times–bestselling author Rae Carson returns to the world of The Girl of Fire and Thorns in this action-packed fantasy-adventure starring an iconic heroine who fights for her family and her friends, and for a place where she will belong.

The book, The Empire of Dreams [Bulk, Wholesale, Quantity] ISBN# 9780062691903 in Hardcover by Rae Carson may be ordered in bulk quantities. Minimum starts at 25 copies. Availability based on publisher status and quantity being ordered.
View AllClose

MSRP:
Now:
As low as
Was:
Building the Empire State celebrates the monumental achievement of the design and construction of the world's most famous skyscraper. The construction was orchestrated by the general contractors...

A People's History of American Empire

The Dictionary of Dreams: 10,000 Dreams Interpreted

MSRP:
Now:
As low as
Was:
What does it mean to dream of running, playing an accordian, catching frogs, riding a stallion, eating honey, dying; or to see an eagle, apples, a tunnel, a shoemaker, or a field of growing wheat in...

MSRP:
Now:
As low as
Was:
Ambassador Mahit Dzmare arrives in the center of the multi-system Teixcalaanli Empire only to discover that her predecessor, the previous ambassador from their small but fiercely independent mining...

MSRP:
Now:
As low as
Was:
In the developed world, if you want a drink of water you just turn on a tap or open a bottle. But for millions of families worldwide, finding clean water is a daily challenge, and kids are often the...

MSRP:
Now:
As low as
Was:
After a parrot makes fun of Sooki’s big ears, long nose, and wrinkled skin, the “saggy baggy” elephant isn’t too sure of himself. But once he meets some beautiful creatures who look just like him,...

MSRP:
Now:
As low as
Was:
This stunning novel from the survival story master, set along a rugged coastline centuries ago, does for the ocean what Hatchet does for the woods, as it relates the story of a young person’s battle...

MSRP:
Now:
As low as
Was:
Let's get moving with an exciting array of vehicles to color! Kids who are fascinated by fast-moving vehicles will be thrilled by these fun-filled, easy-to-color illustrations. Children's creativity...

MSRP:
Now:
As low as
Was:
Stay cozy all year long and feel good about wrapping yourself in comfort. These fleece blankets are made from 100% recycled post-consumer waste. Using primarily plastic bottles transformed into...

I Dream He Talks to Me: A Memoir of Learning How to Listen

MSRP:
Now:
As low as
Was:
When Allison’s son, John Henry, stopped using his growing vocabulary just before his second birthday, she knew in her bones that something was shifting. In the years since his autism diagnosis,...

The Viscount Who Loved Me: Bridgerton (Bridgertons #2)

MSRP:
Now:
As low as
Was:
A New York Times Bestseller From #1 New York Times bestselling author Julia Quinn comes the story of Anthony Bridgerton, in the second of her beloved Regency-set novels featuring the charming,...

MSRP:
Now:
As low as
Was:
"Staying Alive", "Being Alive" and "Being Human" have introduced many thousands of new readers to contemporary poetry, and have helped poetry lovers to discover the little known riches of world...

Under the Wave at Waimea

MSRP:
Now:
As low as
Was:
“Theroux’s work is like no one else’s.” –Francine Prose, New York Times Book Review From legendary writer Paul Theroux comes an atmospheric novel following a big-wave surfer as he confronts aging,...