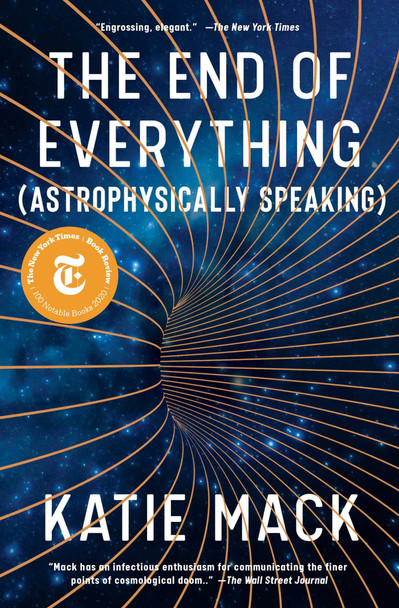 From one of the most dynamic rising stars in astrophysics, an “engrossing, elegant” (The New York Times) look at five ways the universe could end, and the mind-blowing lessons each scenario reveals about the most important concepts in cosmology.

We know the universe had a beginning. With the Big Bang, it expanded from a state of unimaginable density to an all-encompassing cosmic fireball to a simmering fluid of matter and energy, laying down the seeds for everything from black holes to one rocky planet orbiting a star near the edge of a spiral galaxy that happened to develop life as we know it. But what happens to the universe at the end of the story? And what does it mean for us now?

Dr. Katie Mack has been contemplating these questions since she was a young student, when her astronomy professor informed her the universe could end at any moment, in an instant. This revelation set her on the path toward theoretical astrophysics. Now, with lively wit and humor, she takes us on a mind-bending tour through five of the cosmos’s possible finales: the Big Crunch, Heat Death, the Big Rip, Vacuum Decay (the one that could happen at any moment!), and the Bounce. Guiding us through cutting-edge science and major concepts in quantum mechanics, cosmology, string theory, and much more, The End of Everything is a wildly fun, surprisingly upbeat ride to the farthest reaches of all that we know.

The book, The End of Everything: (Astrophysically Speaking) [Bulk, Wholesale, Quantity] ISBN# 9781982103552 in Paperback by Katie Mack may be ordered in bulk quantities. Minimum starts at 25 copies. Availability based on publisher status and quantity being ordered.
View AllClose

MSRP:
Now:
As low as
Was:
Scared of speaking in public? You’re not alone! This accessible guide, written by a former teacher and poetry slam coach, will help tweens and teens find their voice! If you have weak, wobbly knees...

MSRP:
Now:
As low as
Was:
Everything is . . . MAMA! Jimmy Fallon, one of the most popular entertainers in the world and NBC's Tonight Show host, was on a mission with his first children's book to have every baby's first word...

MSRP:
Now:
As low as
Was:
Dale Carnegie, author of the legendary How to Win Friends and Influence People, began his career as the premier "life coach" of the twentieth century by teaching the art of public speaking. Public...

MSRP:
Now:
As low as
Was:
The instant #1 New York Times bestseller--soon to be a major motion picture! In theaters May 19, it stars Amandla Stenberg as Maddy and Nick Robinson as Olly. Risk everything . . . for love. What if...

MSRP:
Now:
As low as
Was:
Canada's relationship with its Indigenous people has suffered as a result of both the residential school system and the lack of understanding of the historical and current impact of those schools...

Winning: The Unforgiving Race to Greatness

MSRP:
Now:
As low as
Was:
From the elite performance coach for Michael Jordan, Kobe Bryant, Dwyane Wade, and many others—and the author of the powerful bestseller Relentless—a no-holds-barred formula for winning that is ideal...

Marketing Mess to Brand Success: 30 Challenges to Transform Your Organization's Brand (and Your Own)

MSRP:
Now:
As low as
Was:
This Book Can Make You a Better Marketing Manager In this second book of Scott Miller’s Mess to Success series, the FranklinCovey Executive VP reveals 30 career-challenging obstacles that you may...

Pick Three: You Can Have It All (Just Not Every Day) [Hardcover]

MSRP:
Now:
As low as
Was:
In this motivational handbook—both a business how-to and self-help guide—the New York Times bestselling author of Dot Complicated takes on the fallacy of the "well-balanced" life, arguing that the...