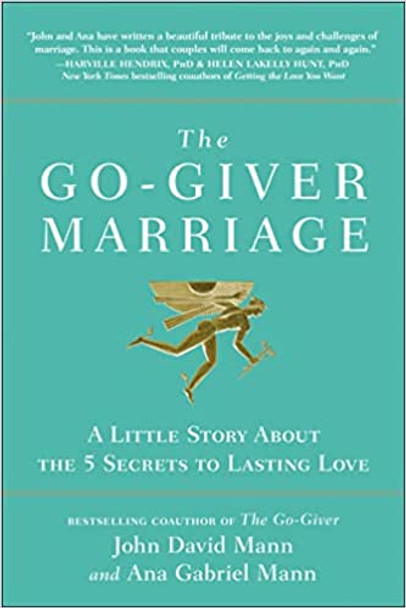 “To say love is what makes a marriage work is like saying it takes oxygen to climb a mountain. Yes, oxygen is necessary. But not sufficient.”

For more than a decade, readers of the bestselling Go-Giver series have been clamoring for a book on how to apply the philosophy at the heart of The Go-Giver to their personal relationships. From the original story’s coauthor and his wife, a clinically trained therapist, this long-awaited sequel shows readers how to unlock a deeply satisfying, abundant relationship based on simple, everyday acts of generosity.

In this new narrative, a position has opened up at the top of the multinational giant Rachel’s Famous Coffee, and Tom desperately wants the job. To gain the position, he must first go through a series of interviews with the company’s top executives, including its eccentric CFO, Jeremiah.

Tom’s wife, Tess, is facing her own challenges. The couple first met on the job, where Tess was a rising star—until her career was put on hold by the birth of a son with special needs. The trauma and heartbreak of the past six years has put tremendous stress on their marriage. Now, Tess has learned that her best friend Amy is getting a divorce. Could she and Tom be drifting in the same direction? The thought leaves her stomach in knots.

But Tom and Tess are about to have a transformational day. Over the next few hours, they will each learn from a wise cast of characters (including some surprise guests from previous Go-Giver stories) about five powerful secrets to building a love that lasts.

Over the years since the original book’s publication, the term “go-giver” has become shorthand for a defining set of values that has helped hundreds of thousands of people around the world find greater professional success. Now, with its charming fable-within-a-parable, followed by an in-depth practical guide, The Go-Giver Marriage brings the personal side of The Go-Giver to life.

The book, The Go-Giver Marriage: A Little Story about the Five Secrets to Lasting Love [Bulk, Wholesale, Quantity] ISBN# 9781637740811 in Hardcover by John David Mann, Ana Gabriel Mann may be ordered in bulk quantities. Minimum starts at 25 copies. Availability based on publisher status and quantity being ordered.
View AllClose

The Go-Giver Leader: A Little Story about What Matters Most in Business

MSRP:
Now:
As low as
Was:
From the bestselling authors of The Go-Giver comes an equally compelling tale about a struggling small business and the ambitious young executive trying to lead them in an important decision. A...

The Go-Giver Influencer: A Little Story about a Most Persuasive Idea

MSRP:
Now:
As low as
Was:
**A 2018 OWL AWARD LONGLIST WINNER IN THE BUSINESS CATEGORY**The bestselling authors of The Go Giver</

MSRP:
Now:
As low as
Was:
“If you’re at the end of your relationship rope, reach for Radical Acceptance.” —Elle In this “warm, honest approach to prioritizing your partner and creating true happiness in your relationship”...

MSRP:
Now:
As low as
Was:
Their teeth are brushed, their pajamas are on, and as soon as they say good night to Mama, the five little monkeys start to jump on their bed! But trouble awaits as, one by one, they fall off and...

The Go-Giver Influencer: A Little Story about a Most Persuasive Idea

MSRP:
Now:
As low as
Was:
**A 2018 OWL AWARD LONGLIST WINNER IN THE BUSINESS CATEGORY**The bestselling authors of The Go Giver, Go-Givers Sell More, and The Go-Giver Leader are back with a gripping parable about getting ahead...

Can We Talk about Israel?: A Guide for the Curious, Confused, and Conflicted

MSRP:
Now:
As low as
Was:
From the expert who understands both sides of one of the world's most complex, controversial topics, a modern-day Guide for the Perplexed-a primer on Israel and the Israeli-Palestinian conflict...

The Go-Giver Leader: A Little Story about What Matters Most in Business

MSRP:
Now:
As low as
Was:
From the bestselling authors of The Go-Giver comes an equally compelling tale about a struggling small business and the ambitious young executive trying to lead them in an important decision. A...

Black Market: An Insider's Journey Into the High-Stakes World of College Basketball

MSRP:
Now:
As low as
Was:
From a New York Times bestselling author comes "the riveting pick-me-up we all need right now" (People), that argues that humans thrive in a crisis and that our innate kindness and cooperation have...