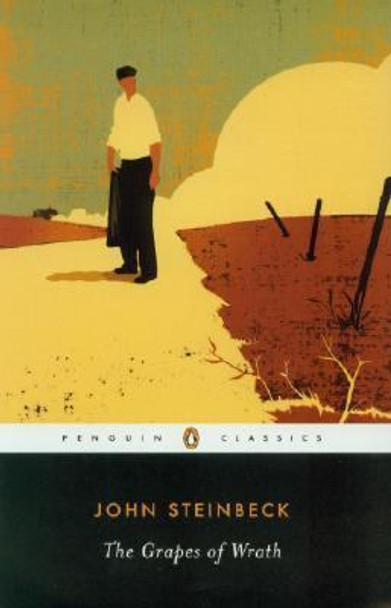 The Pulitzer Prize-winning epic of the Great Depression, a book that galvanized—and sometimes outraged—millions of readers. First published in 1939, Steinbeck’s Pulitzer Prize-winning epic of the Great Depression chronicles the Dust Bowl migration of the 1930s and tells the story of one Oklahoma farm family, the Joads—driven from their homestead and forced to travel west to the promised land of California. Out of their trials and their repeated collisions against the hard realities of an America divided into Haves and Have-Nots evolves a drama that is intensely human yet majestic in its scale and moral vision, elemental yet plainspoken, tragic but ultimately stirring in its human dignity. A portrait of the conflict between the powerful and the powerless, of one man’s fierce reaction to injustice, and of one woman’s stoical strength, the novel captures the horrors of the Great Depression and probes into the very nature of equality and justice in America. At once a naturalistic epic, captivity narrative, road novel, and transcendental gospel, Steinbeck’s powerful landmark novel is perhaps the most American of American Classics. This Penguin Classic sedition contains an introduction and notes by Steinbeck scholar Robert Demott. For more than seventy years, Penguin has been the leading publisher of classic literature in the English-speaking world. With more than 1,700 titles, Penguin Classics represents a global bookshelf of the best works throughout history and across genres and disciplines. Readers trust the series to provide authoritative texts enhanced by introductions and notes by distinguished scholars and contemporary authors, as well as up-to-date translations by award-winning translators.

The book, The Grapes of Wrath [Bulk, Wholesale, Quantity] ISBN# 9780143039433 in Paperback by Steinbeck, John may be ordered in bulk quantities. Minimum starts at 25 copies. Availability based on publisher status and quantity being ordered.
View AllClose

The Wrath of Cochise: The BASCOM Affair and the Origins of the Apache Wars

MSRP:
Now: $15.95
Was:
In a powerful evocation of the drama of the American West, here is the harrowing story of the feud that ignited the Apache Wars. In February 1861, the twelve-year-old son of an Arizona rancher was...

The Grapes of Wrath

The Grapes of Math

MSRP:
Now: $18.99
Was:
This innovative and delightful book challenges children -- and parents -- to open their minds and solve problems in new and unexpected ways. By looking for patterns, symmetries, and familiar number...

MSRP:
Now: $6.99
Was:
Let Scholastic Bookshelf be your guide through the whole range of your child's experiences-laugh with them, learn with them, read with them! Eight classic, best-selling titles are available now!...

MSRP:
Now: $30.60
Was:
The book, The Grapes Of Wrath [ Bulk Wholesale Quantity ] ISBN 143039431 in by Steinbeck, John may be ordered in bulk quantities . Bulk book availability based on publisher status and quantity being...

How To Brew: Everything You Need to Know to Brew Great Beer Every Time

MSRP:
Now: $24.95
Was:
Fully revised and updated, How to Brew is the definitive guide to making quality beers at home. Whether you want simple, sure-fire instructions for making your first beer, or you're a seasoned...

Hot Seat: What I Learned Leading a Great American Company

MSRP:
Now: $30.00
Was:
A memoir of successful leadership in times of crisis: the former CEO of General Electric, named one of the “World’s Best CEOs” three times by Barron’s, shares the hard-won lessons he learned from his...

MSRP:
Now: $26.00
Was:
Explores the most common lessons we learn when we experience loss and explains how to turn a set-back into a step forward by examining the eleven elements that make up the DNA of those who learn......

Of Mice and Men [Paperback]

MSRP:
Now: $16.00
Was:
They are an unlikely pair: George is "small and quick and dark of face"; Lennie, a man of tremendous size, has the mind of a young child. Yet they have formed a "family," clinging together in the...

The Diary of a Young Girl [Hardcover]

MSRP:
Now: $25.00
Was:
This edition reprints the version authorized by the Frank estate, and includes a new Introduction, a Bibliography, and a chronology of Anne Frank's life and timesThe book, The Diary of a Young Girl...

Roll Me up and Smoke Me When I Die: Musings from the Road [Hardcover]

MSRP:
Now: $22.99
Was:
Nashville 1971. As the year drew to a close, Willie Nelson wasn't exactly feeling the spirit of the season. A stalled career, music executives hounding him for a formulaic "Nashville Sound" hit, and,...

MSRP:
Now: $6.99
Was:
Let Scholastic Bookshelf be your guide through the whole range of your child's experiences-laugh with them, learn with them, read with them! Eight classic, best-selling titles are available now!...

MSRP:
Now: $7.99
Was:
He lived in the dark ages of the future. In a loveless world, he dared to fall in love. In an age that had lost all trace of science and civilization, he had the courage to seek and find knowledge...