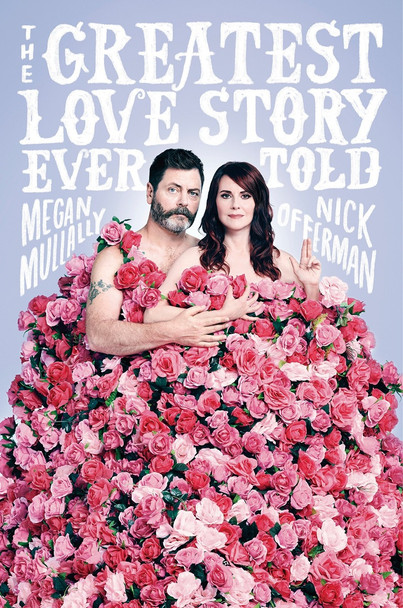 Megan Mullally and Nick Offerman reveal the full story behind their epic romance--presented in a series of intimate conversations between the couple, including photos, anecdotes, and the occasional puzzle.

The year: 2000. The setting: Los Angeles. A gorgeous virtuoso of an actress agreed to star in a random play, and a basement-dwelling scenic carpenter said he would assay a supporting role in the selfsame pageant. At the first rehearsal she surveyed her fellow cast members, determining if any of the men might qualify to provide her with a satisfying fling. Her gaze fell upon the carpenter, and like a bolt of lightning the thought struck her: no dice. Moving on.

Yet, unbeknownst to our protagonists, Cupid had merely set down his bow and picked up a rocket launcher . . . that fired a love rocket (not a euphemism). The players were Megan Mullally and Nick Offerman, and the resulting romance, once ignited, was . . . epic. Beyond epic. It resulted in a coupling that has endured to this day; a sizzling, perpetual tryst that has captivated the world with its kindness, athleticism, astonishingly low-brow humor, and true (fire emoji) passion.

How did they do it? They came from completely different families, ignored a significant age difference, and were separated by the gulf of several social strata. Megan loved books and art history; Nick loved hammers. But much more than these seemingly unsurpassable obstacles were the values they held in common: respect, decency, the ability to mention genitalia in almost any context, and an abiding obsession with the songs of Tom Waits.

Eighteen years later, they're still very much in love and have finally decided to reveal the philosophical mountains they have conquered, the lessons they've learned, and the myriad jigsaw puzzles they've completed. Presented as an oral history in a series of conversations between the couple, the book features anecdotes, hijinks, photos, and a veritable grab bag of tomfoolery. This is not only the intoxicating book that Mullally's and Offerman's fans have been waiting for, it might just hold the solution to the greatest threat facing our modern world: the single life.

The book, The Greatest Love Story Ever Told: An Oral History [Bulk, Wholesale, Quantity] ISBN# 9781101986677 in Hardcover by Nick Offerman;Megan Mullally may be ordered in bulk quantities. Minimum starts at 25 copies. Availability based on publisher status and quantity being ordered.
View AllClose

Free for All: Joe Papp, the Public, and the Greatest Theater Story Every Told

MSRP:
Now:
As low as
Was:
Free for All is an irresistible behind-the-scenes look at one of America’s most beloved and important cultural institutions. Under the inspired leadership of founder Joseph Papp, the Public Theater...

The Greatest Story Ever Told

MSRP:
Now:
As low as
Was:
In 1976, John Maxwell was excited to receive a book as a gift. The title: The Greatest Story Ever Told. Imagine his shock when he opened it to find all the pages blank-except for a note from the...

The Greatest Stories Never Told: 100 Tales from History to Astonish, Bewilder, and Stupefy

MSRP:
Now:
As low as
Was:
Inspired by the popular History Channel( Timelab 2000 series, this book features the most startling stories ever plucked from the pages of history. 200+ photos & illustrationsThe book, The...

MSRP:
Now:
As low as
Was:
Search the annals of military history and you will discover no end of quirky characters and surprising true stories: The topless dancer who saved the Byzantine Empire. The World War I battle that was...

MSRP:
Now:
As low as
Was:
*New York Times bestseller—over 25 million copies sold * *The #1 Most Influential Business Book of the Twentieth Century* One of the most inspiring and impactful books ever written, The 7 Habits of...

How Cybersecurity Really Works: A Hands-On Guide for Total Beginners

MSRP:
Now:
As low as
Was:
Cybersecurity for Beginners is an engaging, informal introduction to the field of cybersecurity. Readers learn how attackers operate, as well as how to defend individuals and organizations against...

MSRP:
Now:
As low as
Was:
A story about friendships and commitment to one another so incredible you wouldn't believe it if it wasn't true.Kevan is just one of the guys. It's impossible to know him and not become a little more...

Where Does the Sun Go?

The Future Is Faster Than You Think: How Converging Technologies Are Transforming Business, Industries, and Our Lives (Exponential Technology Series)

MSRP:
Now:
As low as
Was:
**2020 OWL AWARD BIG IDEA CATEGORY WINNER**From the New York Times bestselling authors of Abundance and Bold comes a practical playbook for technological convergence in our modern era. In their book...

MSRP:
Now:
As low as
Was:
Michelle Lopez—the wildly popular and critically acclaimed blogger behind Hummingbird High—teaches busy people how to make cookies, pies, cakes, and other treats, without spending hours in the...

Children of Blood and Bone (Legacy of Orisha #1)

They killed my mother. They took our magic. They tried to bury us. Now we rise. Zélie Adebola remembers when the soil of Orïsha hummed with magic. Burners ignited flames, Tiders beckoned waves, and...

MSRP:
Now:
As low as
Was:
The Queen of Mystery has come to Harper Collins! Agatha Christie, the acknowledged mistress of suspense—creator of indomitable sleuth Miss Marple, meticulous Belgian detective Hercule Poirot, and so...

MSRP:
Now:
As low as
Was:
**A 2020 OWL AWARD LONGLIST WINNER IN THE POLITICS & CURRENT EVENTS CATEGORY**Governor Andrew Cuomo tells the riveting story of how he took charge in the fight against COVID-19 as New York became...