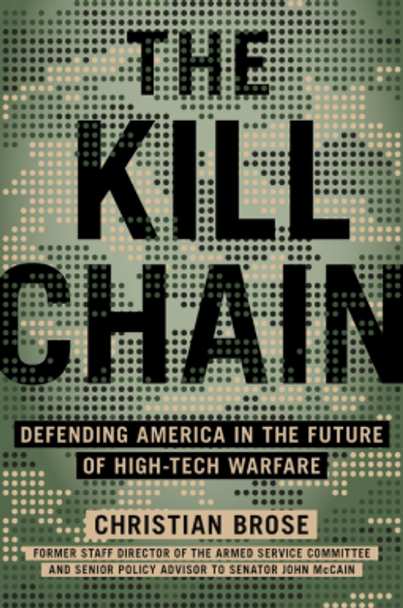 From a former senior advisor to Senator John McCain, an urgent wake-up call about how new technologies are threatening America's military might.

When we think about the future of war, the military and Washington and most everyone gets it backwards. We think in terms of buying single military systems, such as fighter jets or aircraft carriers. And when we think about modernizing those systems, we think about buying better versions of the same things. But what really matters is not the single system but "the battle network" -- the collection of sensors and shooters that enables a military to find an enemy system, target it, and attack it. This process is what the military calls "the kill chain" -- how you get from detection to action, and do it as quickly as possible. The future of war is not about buying better versions of the same systems we have always had; it is about buying faster, better kill chains.

As former Staff Director for the Senate Armed Services Committee and senior policy advisor to Senator John McCain, Christian Brose saw this reality up close. In The Kill Chain, he elaborates on one of the greatest strategic predicaments facing America now: that we are playing a losing game. Our military's technological superiority and traditional approach to projecting power have served us well for decades, when we faced lesser opponents. But now we face highly capable and motivated competitors that are using advanced technologies to erode our military edge, and with it, our ability to prevent war, deter aggression, and maintain peace.

We must adapt or fail, Brose writes, and the biggest obstacle to doing so is the sheer inertial force of the status quo.

The book, The Kill Chain: Defending America in the Future of High-Tech Warfare [Bulk, Wholesale, Quantity] ISBN# 9780316533539 in Hardcover by Christian Brose may be ordered in bulk quantities. Minimum starts at 25 copies. Availability based on publisher status and quantity being ordered.
View AllClose

A Higher Form of Killing: The Secret History of Chemical and Biological Warfare

MSRP:
Now: $16.00
Was:
A Higher Form of Killing opens with the first devastating battlefield use of lethal gas in World War I, and then investigates the stockpiling of biological weapons during World War II and in the...

Chains (The Seeds of America Trilogy)

MSRP:
Now: $19.99
Was:
If an entire nation could seek its freedom, why not a girl? As the Revolutionary War begins, thirteen-year-old Isabel wages her own fight...for freedom. Promised freedom upon the death of their...

The Hill to Die on: The Battle for Congress and the Future of Trump's America

MSRP:
Now: $28.00
Was:
NEW YORK TIMES BESTSELLER • The inside story of Donald Trump’s first two years in Washington as viewed from Capitol Hill, a startling account that turns “Congress into a Game of Thrones book” (Trevor...

A Higher Form of Killing: Six Weeks in World War I That Forever Changed the Nature of Warfare

MSRP:
Now: $18.00
Was:
Between April 22 and May 31, 1915, Western civilization was shocked. World War I was already appalling in its brutality, but until then it had been fought on the battlefield and by rules long agreed...

With All Due Respect: Defending America with Grit and Grace [Hardcover]

MSRP:
Now: $29.99
Was:
A revealing, dramatic, deeply personal book about the most significant events of our time, written by the former United States Ambassador to the United Nations Nikki Haley is widely admired for her...

MSRP:
Now: $23.00
Was:
Delicious plant-based, gluten-free recipes and lifestyle tips for packed lunches, snacks, and simple meals that are easy and accessible to everyone—from the author of the international bestseller...

MSRP:
Now: $19.99
Was:
The actress, comedian, and podcaster extraordinaire's guide to being a #brave, bikini-wearing badass. If you’ve ever seen a fat person post a bikini shot on social media, you already know that they...

MSRP:
Now: $4.16
Was:
The Medium Notched Saddlestitched Journal features a fun flair thanks to the colorful page that peeks through a notch in the cover. Available in four color options, this customizable journal...

Ida B. the Queen: The Extraordinary Life and Legacy of Ida B. Wells

MSRP:
Now: $27.00
Was:
Journalist. Suffragist. Antilynching crusader. In 1862, Ida B. Wells was born enslaved in Holly Springs, Mississippi. In 2020, she won a Pulitzer Prize. Ida B. Wells committed herself to the...