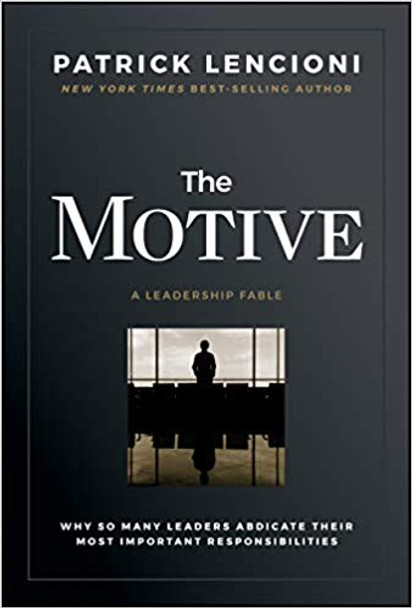 MSRP:
Now: List Price $25.00
Was:
— You save
Hardcover
This product qualifies for FREE US Ground Shipping on orders over $100.

**A 2020 OWL AWARD LONGLIST WINNER IN THE LEADERSHIP CATEGORY**

Shay was still angry but shrugged nonchalantly as if to say, it’s not that big of a deal. “So, what am I wrong about?”

“You’re not going to want to hear this, but I have to tell you anyway.” Liam paused before finishing. “You might be working hard, but you’re not doing it for the company.”

“What the hell does that mean?” Shay wanted to know.

Knowing that his adversary might punch him for what he was about to say, Liam responded. “You’re doing it for yourself.”

New York Times best-selling author Patrick Lencioni has written a dozen books that focus on how leaders can build teams and lead organizations. In The Motive, he shifts his attention toward helping them understand the importance of why they’re leading in the first place.

In what may be his edgiest page-turner to date, Lencioni thrusts his readers into a day-long conversation between rival CEOs. Shay Davis is the CEO of Golden Gate Alarm, who, after just a year in his role, is beginning to worry about his job and is desperate to figure out how to turn things around. With nowhere else to turn, Shay receives some hard-to-swallow advice from the most unlikely and unwanted source―Liam Alcott, CEO of a more successful security company and his most hated opponent.

Lencioni uses unexpected plot twists and crisp dialogue to take us on a journey that culminates in a resolution that is as unexpected as it is enlightening. As he does in his other books, he then provides a straightforward summary of the lessons from the fable, combining a clear explanation of his theory with practical advice to help executives examine their true motivation for leading. In addition to provoking readers to honestly assess themselves, Lencioni presents action steps for changing their approach in five key areas. In doing so, he helps leaders avoid the pitfalls that stifle their organizations and even hurt the people they are meant to serve.

The book, The Motive: Why So Many Leaders Abdicate Their Most Important Responsibilities [Bulk, Wholesale, Quantity] ISBN# 9781119600459 in Hardcover by Patrick M. Lencioni may be ordered in bulk quantities. Minimum starts at 25 copies. Availability based on publisher status and quantity being ordered.

Be Strong and of Good Courage: How Israel's Most Important Leaders Shaped Its Destiny

The Seventh Most Important Thing

MSRP:
Now:
As low as
Was:
This “luminescent” (Kirkus Reviews) story of anger and art, loss and redemption will appeal to fans of Lisa Graff’s Lost in the Sun and Vince Vawter’s Paperboy. Arthur T. Owens grabbed a brick and...

The Signal and the Noise: Why So Many Predictions Fail--But Some Don't

MSRP:
Now:
As low as
Was:
Nate Silver built an innovative system for predicting baseball performance, predicted the 2008 election within a hair’s breadth, and became a national sensation as a blogger—all by the time he was...

MSRP:
Now:
As low as
Was:
Listen! Do you hear a sound? Noises come from all around. Soft and gentle, loud and clear. Oh so many sounds to hear! SoMany Sounds is a wonderful rhyming read-aloud featuring everyday sounds and a...

Why Do So Many Incompetent Men Become Leaders?: (and How to Fix It)

MSRP:
Now:
As low as
Was:
Look around your office. Turn on the TV. Incompetent leadership is everywhere, and there's no denying that most of these leaders are men. In this timely and provocative book, Tomas Chamorro-Premuzic...

Think Like a Rocket Scientist: Simple Strategies You Can Use to Make Giant Leaps in Work and Life

MSRP:
Now:
As low as
Was:
**A 2020 OWL AWARD SHORTLIST WINNER IN THE LEADERSHIP CATEGORY**Named a "must read" by Susan Cain, "endlessly fascinating" by Daniel Pink, and "bursting with practical insights" by Adam Grant. A...

Curve Benders: Why Strategic Relationships Will Power Your Non-Linear Growth in the Future of Work

Capital in the Twenty-First Century

MSRP:
Now:
As low as
Was:
What are the grand dynamics that drive the accumulation and distribution of capital? Questions about the long-term evolution of inequality, the concentration of wealth, and the prospects for economic...

The Men Who United the States: America's Explorers, Inventors, Eccentrics, and Mavericks, and the Creation of One Nation, Indivisible

MSRP:
Now:
As low as
Was:
Simon Winchester, the acclaimed New York Times bestselling author of Atlantic and The Professor and the Madman, delivers his first book about America: a fascinating popular history that illuminates...

The Making of the President 2016: How Donald Trump Orchestrated a Revolution

MSRP:
Now:
As low as
Was:
In the tradition of Theodore White’s landmark books, the definitive look at how Donald J. Trump shocked the world to become president From Roger Stone, a New York Times bestselling author, longtime...