The New Jim Crow: Mass Incarceration in the Age of Colorblindness [Hardcover] 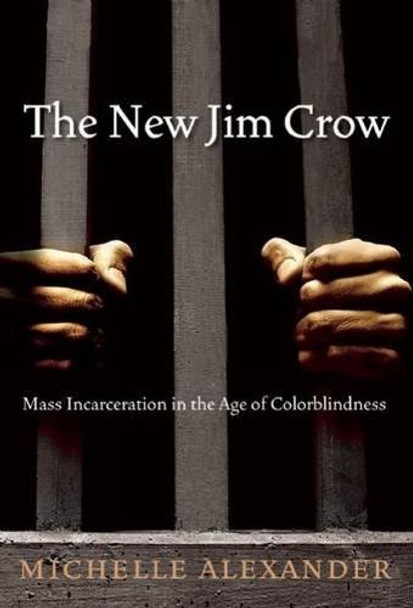 The New Jim Crow: Mass Incarceration in the Age of Colorblindness [Hardcover]

"Jarvious Cotton's great-great-grandfather could not vote as a slave. His great-grandfather was beaten to death by the Klu Klux Klan for attempting to vote. His grandfather was prevented from voting by Klan intimidation; his father was barred by poll taxes and literacy tests. Today, Cotton cannot vote because he, like many black men in the United States, has been labeled a felon and is currently on parole." As the United States celebrates the nation's "triumph over race" with the election of Barack Obama, the majority of young black men in major American cities are locked behind bars or have been labeled felons for life. Although Jim Crow laws have been wiped off the books, an astounding percentage of the African American community remains trapped in a subordinate status--much like their grandparents before them. In this incisive critique, former litigator-turned-legal-scholar Michelle Alexander provocatively argues that we have not ended racial caste in America: we have simply redesigned it. Alexander shows that, by targeting black men and decimating communities of color, the U.S. criminal justice system functions as a contemporary system of racial control, even as it formally adheres to the principle of color blindness. The New Jim Crow challenges the civil rights community--and all of us--to place mass incarceration at the forefront of a new movement for racial justice in America.

The book, The New Jim Crow: Mass Incarceration in the Age of Colorblindness [Bulk, Wholesale, Quantity] ISBN# 9781595581037 in Hardcover by Michelle Alexander may be ordered in bulk quantities. Minimum starts at 25 copies. Availability based on publisher status and quantity being ordered.
View AllClose

The New Jim Crow: Mass Incarceration in the Age of Colorblindness (Anniversary)

MSRP:
Now:
As low as
Was:
A tenth-anniversary edition of the iconic bestseller—“one of the most influential books of the past 20 years,” according to the Chronicle of Higher Education—with a new preface by the author Seldom...

The New Jim Crow: Mass Incarceration in the Age of Colorblindness

MSRP:
Now:
As low as
Was:
A tenth-anniversary edition of the iconic bestseller—“one of the most influential books of the past decade,” according to the Chronicle of Higher Education—with a new preface by the author Seldom...

Locked in: The True Causes of Mass Incarceration--And How to Achieve Real Reform

MSRP:
Now:
As low as
Was:
A groundbreaking examination of our system of imprisonment, revealing the true causes of mass incarceration as well as the best path to reform. In the 1970s, the United States had an incarceration...

MSRP:
Now:
As low as
Was:
A renowned journalist and legal commentator exposes the unchecked power of the prosecutor as a driving force in America’s mass incarceration crisis—and charts a way out. “An important, thoughtful,...

The Strange Career of Jim Crow

MSRP:
Now:
As low as
Was:
C. Vann Woodward, who died in 1999 at the age of 91, was America's most eminent Southern historian, the winner of a Pulitzer Prize for Mary Chestnut's Civil War and a Bancroft Prize for The Origins...

MSRP:
Now:
As low as
Was:
A new chapter book series from Major League Baseball's 2006 National League MVP, Ryan Howard! Every day when Little Rhino comes home from school, he finishes his homework, grabs his bat, his glove,...

MSRP:
Now:
As low as
Was:
Lyrical,breathtaking, splendid,--words used to describe Allen Say's GRANDFATHER'S JOURNEY when it was first published. At once deeply personal yet expressing universally held emotions, this tale of...

MSRP:
Now:
As low as
Was:
Rose and Rosie are known for their candid and hilarious YouTube videos... but now they are taking oversharing to a whole new level. Discussing sexuality, revealing secrets and empowering others,...

The Diary of Anne Frank: A Play

MSRP:
Now:
As low as
Was:
Tracy Kidder is a winner of the Pulitzer Prize and the author of the bestsellers The Soul of a New Machine, House, Among Schoolchildren, and Home Town. He has been described by the Baltimore Sun as...

MSRP:
Now:
As low as
Was:
The FORGOTTEN REALMSis the most successful and widely known DUNGEONS & DRAGONScampaign setting ever created, and it owes its existence to creator Ed Greenwood. This 160-page hardcover book describes...

MSRP:
Now:
As low as
Was:
Fierce in its imagining and stupefying in its scope, Jerusalem is the tale of everything, told from a vanished gutter. In the epic novel Jerusalem, Alan Moore channels both the ecstatic visions of...

As Many Nows as I Can Get

MSRP:
Now:
As low as
Was:
A timely, searing, and unconventional romance from an urgent new voice in young adult fiction "Daring, inventive . . . dazzling, not-to-be-missed. --Kathleen Glasgow, author of Girl in Pieces In...