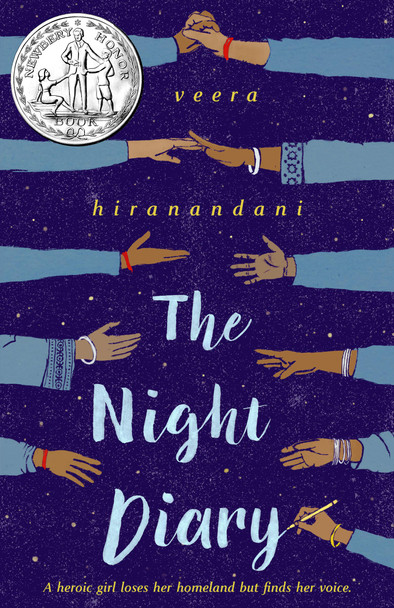 "A gripping, nuanced story of the human cost of conflict appropriate for both children and adults."

In the vein of Inside Out and Back Again and The War That Saved My Life comes a poignant, personal, and hopeful tale of India's partition, and of one girl's journey to find a new home in a divided country

It's 1947, and India, newly independent of British rule, has been separated into two countries: Pakistan and India. The divide has created much tension between Hindus and Muslims, and hundreds of thousands are killed crossing borders.

Half-Muslim, half-Hindu twelve-year-old Nisha doesn't know where she belongs, or what her country is anymore. When Papa decides it's too dangerous to stay in what is now Pakistan, Nisha and her family become refugees and embark first by train but later on foot to reach her new home. The journey is long, difficult, and dangerous, and after losing her mother as a baby, Nisha can't imagine losing her homeland, too. But even if her country has been ripped apart, Nisha still believes in the possibility of putting herself back together.

Told through Nisha's letters to her mother, The Night Diary is a heartfelt story of one girl's search for home, for her own identity...and for a hopeful future.

The book, The Night Diary [Bulk, Wholesale, Quantity] ISBN# 9780735228528 in Paperback by Veera Hiranandani may be ordered in bulk quantities. Minimum starts at 25 copies. Availability based on publisher status and quantity being ordered.
View AllClose

MSRP:
Now:
As low as
Was:
In the vein of Inside Out and Back Again and The War That Saved My Life comes a poignant, personal, and hopeful tale of India's partition, and of one girl's journey to find a new home in a divided...

MSRP:
Now:
As low as
Was:
Nightis one of the masterpieces of Holocaust literature. First published in 1960, it is the autobiographical account of an adolescent boy and his father in Auschwitz. Elie Wiesel writes of their...

MSRP:
Now:
As low as
Was:
Newbery Medalist Paul Fleischman and Bagram Ibatoulline tell a breathtaking immigration tale with appeal across generations. “Pick whatever you like most. Then I’ll tell you its story.” When a...

MSRP:
Now:
As low as
Was:
The version of Twelfth Night and the corresponding footnotes that appear in this volume were originally published in: William Shakespeare, complete works, edited by Jonathan Bate and Eric Rasmussen,...

MSRP:
Now:
As low as
Was:
Originally written in French, Night by Elie Wiesel is an autobiographical masterpiece of survival in the Nazi death camps. This translation by Marion Wiesel, Elie's wife and translator, presents...

I Am Curious: A Little Book about Albert Einstein (Ordinary People Change the World)

MSRP:
Now:
As low as
Was:
The littlest readers can learn about Albert Einstein in this board book version of the New York Times bestselling Ordinary People Change the World biography. This friendly, fun biography series...

The Art of Gathering: How We Meet and Why It Matters [Paperback]

MSRP:
Now:
As low as
Was:
"Hosts of all kinds, this is a must-read!" --Chris Anderson, owner and curator of TED From the host of the New York Times podcast Together Apart, an exciting new approach to how we gather that...

Israel: A Simple Guide to the Most Misunderstood Country on Earth

MSRP:
Now:
As low as
Was:
“This is not your Bubbie’s history book.” —Bill Maher, host of Real Time with Bill Maher ​“A fascinating—and very moving—book that should be read by anyone for whom Israel is a mystery.” —Aaron...

Trust Yourself: Stop Overthinking and Channel Your Emotions for Success at Work

MSRP:
Now:
As low as
Was:
Are you a Sensitive Striver? Learn how to get out of your own way and rediscover your sensitivity as a superpower. ___ Highly sensitive and high performing? ___ Need time to think through...

MSRP:
Now:
As low as
Was:
“Sharply comic, a treasure of a book.” —The London Times “Thoroughly engrossing, though-provoking fantasy.” —School Library Journal (starred review) A special 50th anniversary edition of the...

MSRP:
Now:
As low as
Was:
How to Separate Real Scientific Truths from Fake News “Scientific literacy is our best defense in an age of increasing disinformation.” ―Kellie Gerardi, Aerospace Professional and Author of Not...

You Will Get Through This Night

MSRP:
Now:
As low as
Was:
A BookPal Staff Pick for May 2021 A practical guide to taking control of your mental health for today, tomorrow, and the days after, from the #1 New York Times bestselling author and beloved...

MSRP:
Now:
As low as
Was:
**INSTANT NEW YORK TIMES BESTSELLER** From one of the most followed booktubers today, comes Christine Riccio's Again, but Better, a story about second chances, discovering yourself, and being...