The Plot to Betray America: How Team Trump Embraced Our Enemies, Compromised Our Security, and How We Can Fix It 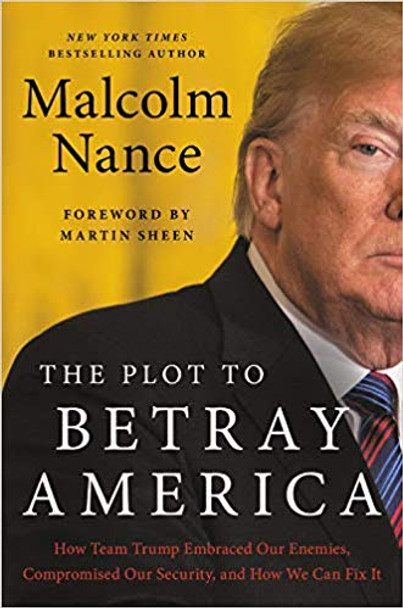 The Plot to Betray America: How Team Trump Embraced Our Enemies, Compromised Our Security, and How We Can Fix It

AN EXPLOSIVE , REVELATORY ASSESSMENT OF THE GREATEST BETRAYAL IN AMERICAN HISTORY

When former FBI Director Robert Mueller III was assigned to the Special Counsel investigation looking into the possibility of Russian interference in the 2016 US election, many Americans felt relieved. But when the report was delivered in April 2019, it was clear that the case was far from closed-and pinning Trump down on conspiracy charges was going to be a lot more difficult than it had first seemed.

In The Plot to Betray America, Malcolm Nance, New York Times bestselling author and renowned intelligence expert, reveals exactly how Trump and his inner circle conspired, coordinated, communicated, and eventually strategized to commit the greatest act of treachery in the history of the United States: compromising the presidential oath of office in exchange for power and personal enrichment.

Seduced by the promises of riches dangled in front of them by Vladimir Putin, the Trump administration eagerly decided to reap the rewards of the plan to put a Kremlin-friendly crony in the Oval Office. And instead of interfering, the Republican Party's faithful William Barr, Paul Manafort, Michael Cohen, Steve Bannon, Rudy Giuliani, Mitch McConnell, Roger Stone, George Papadopoulos, and Jeff Sessions among others did everything they could to facilitate Trump's damage to national security to fill his own pockets. Through in-depth research and interviews with intelligence experts and insiders, Nance charts Trump's deep financial ties to Russia through his family's investments, including those of Donald Trump Jr., Ivanka Trump, and Jared Kushner, and the corrupt behavior of his other double-crossing pro-Moscow associates.

Only by untangling the spider web of personal and financial relationships linking the White House to the Kremlin can we start to free ourselves from the constricting clutches of our foreign adversaries and work to rebuild our fractured nation.

In this geopolitical page-turner, The Plot to Betray America ultimately sketches the tracks and blueprint of the Trump administration's conspiracy against our country-and how we can still fight to defend democracy, protect our national security, and save the Constitution.

The book, The Plot to Betray America: How Team Trump Embraced Our Enemies, Compromised Our Security, and How We Can Fix It [Bulk, Wholesale, Quantity] ISBN# 9780316535762 in Hardcover by Malcolm Nance may be ordered in bulk quantities. Minimum starts at 25 copies. Availability based on publisher status and quantity being ordered.
View AllClose

The Right Answer: How We Can Unify Our Divided Nation

MSRP:
Now:
As low as
Was:
The first declared candidate for president in 2020 delivers a passionate call for bipartisan action, entrepreneurial innovation, and a renewed commitment to the American idea. The son of a union...

Great Again: How to Fix Our Crippled America

MSRP:
Now:
As low as
Was:
n this book (previously published as Crippled America), we’re going to look at the state of the world right now. It’s a terrible mess, and that’s putting it mildly. There has never been a more...

Superfandom: How Our Obsessions Are Changing How We Buy and Who We Are

MSRP:
Now:
As low as
Was:
An in-depth look at the influence of fans―society's alpha customers―on our lives and culture. As fandom sheds its longtime stigmas of geekiness and hysteria, fans are demanding more from the...

The Hype Machine: How Social Media Disrupts Our Elections, Our Economy, and Our Health--And How We Must Adapt

MSRP:
Now:
As low as
Was:
A landmark insider’s tour of how social media affects our decision-making and shapes our world in ways both useful and dangerous, with critical ideas on how to protect ourselves in the 2020 election...

Food Fix: How to Save Our Health, Our Economy, Our Communities, and Our Planet--One Bite at a Time

MSRP:
Now:
As low as
Was:
Help to transform the planet in crisis with this indispensable guide to healthy, ethical, and economically sustainable food from #1 New York Times bestselling author Mark Hyman, MD -- "Read this book...

The Glass Castle: A Memoir [Paperback]

MSRP:
Now:
As low as
Was:
Spending more than seven years on the New York Times bestseller list and now a major motion picture, The Glass Castle: A Memoir tells the story of the dysfunctional yet loving family that gave author...

MSRP:
Now:
As low as
Was:
A master of children's nonfiction" ("ALA Booklist") provides an introduction to baseball, describing the equipment, playing field, rules, players, and process of the game. Full color. My Baseball...

Context Marketing Revolution: How to Motivate Buyers in the Age of Infinite Media

MSRP:
Now:
As low as
Was:
In a world of limitless media noise, how can businesses break through to customers? Context. We are in the midst of a massive media revolution. For the first time in history, ordinary people around...

MSRP:
Now:
As low as
Was:
Pony learns how to brush his teeth by watching Dad. This simple story follows the steps of brushing from choosing a toothbrush to rinsing your mouth. With humorous illustrations and repetitive text,...

The Cat Man of Aleppo

MSRP:
Now:
As low as
Was:
**A 2020 OWL AWARD LONGLIST WINNER IN THE PICTURE BOOKS CATEGORY**The courageous and true story of Mohammad Alaa Aljaleel, who in the midst of the Syrian Civil War offered safe haven to Aleppo's...

MSRP:
Now:
As low as
Was:
Read all about Clifford's BIG ideas! Classic Clifford reissued! It only takes a little to BE BIG! Meet Clifford and Emily Elizabeth in the original Clifford book! Clifford is big. Clifford is...

I Love Daddy Every Day

MSRP:
Now:
As low as
Was:
The first in a collectable new series that celebrates the true spirit of the holidays every day, this colorful picture book engages with the playfulness and appreciation of Father's Day year-round! ...

MSRP:
Now:
As low as
Was:
With the help of three good fairies, Princess Aurora grows up safe and protected from the evil Maleficent. But everything changes when she meets Prince Phillip and falls in love. Disney Princess fans...

MSRP:
Now:
As low as
Was:
Join Mercer Mayer’s classic and beloved character, Little Critter, this Christmas! He’s written a letter to Santa, helped his mom bake cookies, decorated the tree, and much more! But will he get...