The Raging 2020s: Companies, Countries, People - And the Fight for Our Future 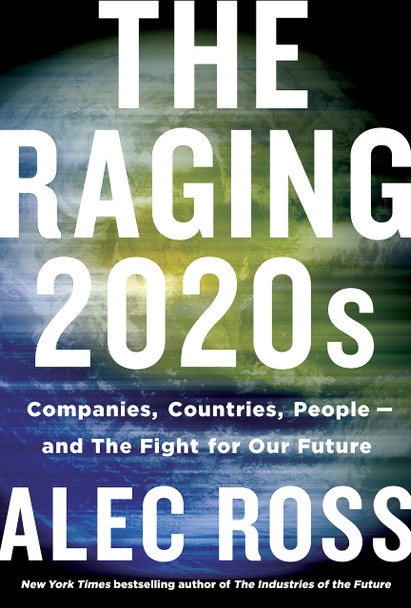 The Raging 2020s: Companies, Countries, People - And the Fight for Our Future

In the face of unprecedented global change, New York Times bestselling author Alec Ross proposes a new social contract to restore the balance of power between government, citizens, and business in The Raging 2020s.

As the market consolidates, the lines between big business and the halls of Congress have become razor-thin. Private companies have become as powerful as countries. As Walter Isaacson said about Alec Ross’s first book, The Industries of the Future, “The future is already hitting us, and Ross shows how it can be exciting rather than frightening.”

Through interviews with the world’s most influential thinkers and stories of corporate activism and malfeasance, government failure and renewal, and innovative economic and political models, Ross proposes a new social contract―one that resets the equilibrium between corporations, the governing, and the governed.

The book, The Raging 2020s: Companies, Countries, People - And the Fight for Our Future [Bulk, Wholesale, Quantity] ISBN# 9781250770929 in Hardcover by Alec Ross may be ordered in bulk quantities. Minimum starts at 25 copies. Availability based on publisher status and quantity being ordered.
View AllClose

Postcapitalism: A Guide to Our Future

MSRP:
Now:
As low as
Was:
Over the past two centuries or so, capitalism has undergone profound changes--economic cycles that veer from boom to bust--from which it has always emerged transformed and strengthened. Surveying...

The Fifth Domain: Defending Our Country, Our Companies, and Ourselves in the Age of Cyber Threats

MSRP:
Now:
As low as
Was:
An urgent new warning from two bestselling security experts--and a gripping inside look at how governments, firms, and ordinary citizens can confront and contain the tyrants, hackers, and criminals...

Creating Freedom: The Lottery of Birth, the Illusion of Consent, and the Fight for Our Future

MSRP:
Now:
As low as
Was:
The ideal of freedom is at the heart of our political and economic system. It is foundational to our sense of justice, our way of life, our conception of what it is to be human. But are we free in...

Vote for Our Future!

MSRP:
Now:
As low as
Was:
In this charming and powerful picture book about voting and elections, the students of Stanton Elementary School learn how we can find--and use--our voices for change. Every two years, on the first...

Our Revolution: A Future to Believe in

MSRP:
Now:
As low as
Was:
Throughout the Presidential campaign, Bernie Sanders galvanized voters with his progressive platform and vision for America. In the book, Sanders shares experiences from the campaign trail and...

Our Separate Ways, with a New Preface and Epilogue: Black and White Women and the Struggle for Professional Identity (Revised)

MSRP:
Now:
As low as
Was:
Addressing gender alone won't help women rise to the top. Although women come from widely diverse backgrounds, they share a common assumption upon entering the workforce: "I have a chance." Along...

MSRP:
Now:
As low as
Was:
From Eric Carle, the New York Times bestselling author of The Very Hungry Caterpillar and The Grouchy Ladybug, comes a colorful and inventive book about a changing chameleon that wants to be a little...

MSRP:
Now:
As low as
Was:
A heart-warming, funny and fast-moving story set in 1930s America - past winner of the highly prestigious Newbery Medal. Bud is on a journey. He has hit the road with one idea in mind - he wants to...

The Art of Caring Leadership: How Leading with Heart Uplifts Teams and Organizations

MSRP:
Now:
As low as
Was:
If your people know you care about them, they will move mountains. Employee engagement and loyalty expert Heather Younger outlines nine ways to manifest the radical power of caring support in the...

What is a Democracy? ( Understanding Political Systems )

MSRP:
Now:
As low as
Was:
Explains what democracy is using real world examples from United States history and government, including the American Revolution, the three branches of government, and the Constitution. The book,...

Super Soldiers: A Salute to the Comic Book Heroes and Villains Who Fought for Their Country

MSRP:
Now:
As low as
Was:
The military in comic books: Comic book superheroes have been influenced by the true heroes of our armed forces for decades. They frequently recreate the actions of presidents, military leaders, and...