The Rise of the Rest: How Entrepreneurs in Surprising Places are Building the New American Dream 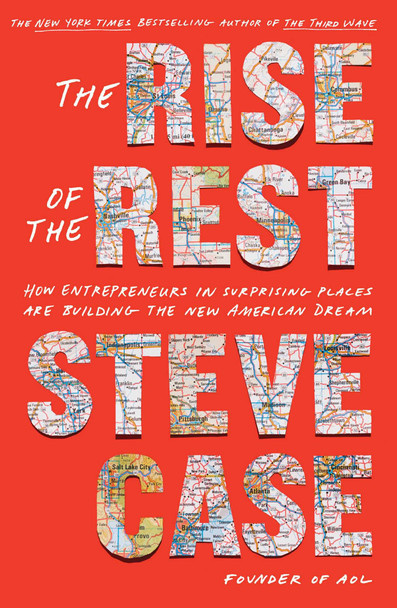 The Rise of the Rest: How Entrepreneurs in Surprising Places are Building the New American Dream

In 2014, Steve Case launched Revolution’s Rise of the Rest, an initiative to accelerate the growth of tech startups across the country. Rise of the Rest is based on a simple idea: cities can be renewed and rise again if they develop a vibrant startup culture. A visionary entrepreneur himself, Case believes that great entrepreneurs can be found anywhere, and can thrive with the proper support and investment. In fact, they’re key to the American DNA. After all, America itself was a startup. It struggled to get going and almost didn’t make it. Today it’s the leader of the free world, in part because it has the world’s largest economy—a testament to several generations of pioneering entrepreneurs. But America needs help keeping its promises, as it is harder today for innovators who live outside the major tech hubs. For most of the past decade, seventy-five percent of venture capital has gone to just three states—California, New York, and Massachusetts—while the forty-seven states making up the rest of the country have been forced to share the remaining twenty-five percent. And it’s even harder for some people no matter where they live. Less than ten percent of venture capital currently goes to female founders, and less than one percent to Black founders. Since new companies—startups—are responsible for net new job creation, it is essential that entrepreneurs everywhere have the opportunity to start and scale companies. Rise of the Rest is about leveling the playing field for everybody, and in the process creating opportunity and jobs for the people and places that have been left behind. This book tells that story and provides a hopeful perspective on the future of America.

In The Rise of the Rest: How Entrepreneurs in Surprising Places are Building the New American Dream, Case takes readers on an exhilarating journey into the startup communities that are transforming cities nationwide. Rise of the Rest’s signature road trips, on a big red tour bus, have created significant local and national buzz and spotlighted communities large and small that have committed to a new tech-enabled future. Along the way, Case introduces readers to dozens of entrepreneurs whose inspirational stories of struggle and achievement match the most iconic examples of American invention.

To date, Case has traveled to forty-three cities on his Rise of the Rest bus tour and has been featured on 60 Minutes, and in The New York Times, USA TODAY, Fast Company, and The Wall Street Journal. With dedicated venture funds, backed by an iconic group of investors, executives, and entrepreneurs including Jeff Bezos, Eric Schmidt, Meg Whitman, John Doerr, Sara Blakely, and Ray Dalio, Rise of the Rest also invests in the most promising high-growth startups located anywhere in the US outside of Silicon Valley, New York City, and Boston. The fund has invested in more than 175 companies across more than eighty cities, including: Phoenix, Chattanooga, Chicago, Denver, Detroit, Louisville, Baltimore, Columbus, St. Louis, Green Bay, Madison, Buffalo, Kansas City, Minneapolis, Cincinnati, Miami, Dallas, Salt Lake City, Omaha, Atlanta, Pittsburgh, Nashville, Indianapolis, New Orleans, and dozens of others.

The book, The Rise of the Rest: How Entrepreneurs in Surprising Places are Building the New American Dream [Bulk, Wholesale, Quantity] ISBN# 9781982191849 in Hardcover by Steve Case may be ordered in bulk quantities. Minimum starts at 25 copies. Availability based on publisher status and quantity being ordered.
View AllClose

Transaction Man: The Rise of the Deal and the Decline of the American Dream

MSRP:
Now:
As low as
Was:
Over the last generation, the United States has undergone seismic changes. Stable institutions have given way to frictionless transactions, which are celebrated no matter what collateral damage they...

The New Pioneers: How Entrepreneurs Are Defying the System to Rebuild the Cities and Towns of America

MSRP:
Now:
As low as
Was:
Imagine a world where there are no building codes, no licensing requirements, no permit fees, no inspectors—no rules or regulations, only common sense and the desire to build something better. This...

MSRP:
Now:
As low as
Was:
The untold history of the surprising origins of the "gig economy" --how deliberate decisions made by consultants and CEOs in the 50s and 60s upended the stability of the workplace and the lives of...

MSRP:
Now:
As low as
Was:
This is the first social enterprise book to combine theory with current cases from around the world to illustrate concepts and provide critical insights into what works, filling a huge gap in the...

Masters of Scale: Surprising Truths from the World's Most Successful Entrepreneurs

MSRP:
Now:
As low as
Was:
What can you learn from a Silicon Valley legend and a pantheon of iconic leaders? The key to scaling a successful business isn’t talent, network, or strategy. It’s an entrepreneurial mindset—and that...

Build for Tomorrow: An Action Plan for Embracing Change, Adapting Fast, and Future-Proofing Your Career

MSRP:
Now:
As low as
Was:
We experience change in four phases. The first is panic. Then we adapt. Then we find a new normal. And then, finally, we reach the phase we could not have imagined in the beginning, the moment when...

MSRP:
Now:
As low as
Was:
Milla and Honey have been best friends since forever. Milla envies Honey’s confidence, her charisma, and her big, chaotic family—especially when they provide a welcome escape from Milla’s own...

Live Life in Crescendo: Your Most Important Work Is Always Ahead of You (The Covey Habits)

MSRP:
Now:
As low as
Was:
Stephen R. Covey spent his long and storied career inspiring millions of individuals to make their lives more effective, compassionate, and meaningful. Near the end of his life, Covey felt there was...

MSRP:
Now:
As low as
Was:
Referred to as “the greatest 20th century writer in English” by the Chicago Tribune, Aldous Huxley has written seminal works like The Doors of Perception and Island. Many of his works are hailed for...

When God Whispers Your Name

The Gift of Influence: Creating Life-Changing and Lasting Impact in Your Everyday Interactions

MSRP:
Now:
As low as
Was:
Researchers estimate that the average person will influence up to eighty thousand people over the course of their lifetime—or 2.8 people daily. That’s a stadium full of people each of us affects in...

MSRP:
Now:
As low as
Was:
Dee loves to sing. She sings during her morning yoga. She even sings while practicing her math facts. She usually sings to herself. But when her teacher asks everyone to share something with the...

MSRP:
Now:
As low as
Was:
Over a hill, at the end of a road, by a glittering stream that twists and turns stands a farmhouse. Step inside the dollhouse-like interior of Farmhouse and relish in the daily life of the family...

Radical Alignment: How to Have Game-Changing Conversations That Will Transform Your Business and Your Life

MSRP:
Now:
As low as
Was:
Why do so many organizations, teams, couples, families, and groups who should be working together end up wasting energy on unproductive conflict? Even when everyone has the same general goals, what’s...

Your Legacy: A Bold Reclaiming of Our Enslaved History

MSRP:
Now:
As low as
Was:
A proud, empowering introduction to African American history that celebrates and honors enslaved ancestors Your story begins in Africa. Your African ancestors defied the odds and survived 400...