The Rope: A True Story of Murder, Heroism, and the Dawn of the NAACP 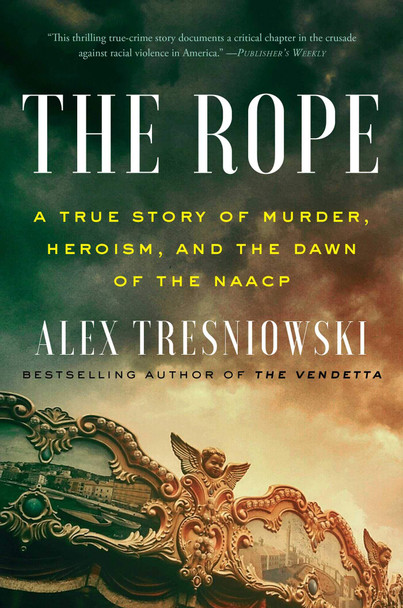 The Rope: A True Story of Murder, Heroism, and the Dawn of the NAACP

From New York Times bestselling author Alex Tresniowski comes a page-turning, remarkable true-crime thriller recounting the 1910 murder of ten-year-old Marie Smith, the dawn of modern criminal detection and the launch of the NAACP.

In the tranquil seaside town of Asbury Park, New Jersey, ten-year-old schoolgirl Marie Smith is brutally murdered. Small town officials, unable to find the culprit, call upon the young manager of a New York detective agency for help. It is the detective’s first murder case, and now, the specifics of the investigation and daring sting operation that caught the killer is captured in all its rich detail for the first time.

Occurring exactly halfway between the end of the Civil War in 1865 and the formal beginning of the Civil Rights Movement in 1954, the brutal murder and its highly-covered investigation sits at the historic intersection of sweeping national forces—religious extremism, class struggle, the infancy of criminal forensics, and America’s Jim Crow racial violence.

Gripping and powerful, The Rope is an important piece of history that gives a voice to the voiceless and resurrects a long-forgotten true crime story that speaks to the very divisions tearing at the nation’s fabric today.

The book, The Rope: A True Story of Murder, Heroism, and the Dawn of the NAACP [Bulk, Wholesale, Quantity] ISBN# 9781982114022 in Hardcover by Alex Tresniowski may be ordered in bulk quantities. Minimum starts at 25 copies. Availability based on publisher status and quantity being ordered.
View AllClose

At the End of the World: A True Story of Murder in the Arctic

MSRP:
Now:
As low as
Was:
At the End of the World is the remarkable story of a series of murders that occurred in an extremely remote corner of the Arctic in 1941. Those murders show that senseless violence in the name of...

Getting Away with Murder: The True Story of the Emmett Till Case

MSRP:
Now:
As low as
Was:
Revised and updated with new information, this Jane Adams award winner is an in-depth examination of the Emmett Till murder case, a catalyst of the Civil Rights Movement. The kidnapping and...

Say Nothing: A True Story of Murder and Memory in Northern Ireland

Getting Away with Murder: The True Story of the Emmett till Case [Hardcover]

MSRP:
Now:
As low as
Was:
The kidnapping and murder of Emmett Till is famous as a catalyst for the Civil Rights Movement. Emmett Till, a fourteen-year-old Black teenager from Chicago, was visiting family in a small town in...

The Notorious Benedict Arnold: A True Story of Adventure, Heroism and Treachery [Paperback]

MSRP:
Now:
As low as
Was:
Most people know that Benedict Arnold was America's first, most notorious traitor. Few know that he was also one of its greatest war heroes. This accessible biography introduces young readers to the...

The Addiction Solution: Treating Our Dependence on Opioids and Other Drugs [Paperback]

MSRP:
Now:
As low as
Was:
A groundbreaking, “timely and well-written” (Booklist, starred review) guide to addiction from a psychiatrist and public health doctor, offering practical, proven solutions for individuals, families,...

In Pursuit of Wealth: The Moral Case for Finance

MSRP:
Now:
As low as
Was:
In this new book, In Pursuit of Wealth: The Moral Case for Finance, Yaron Brook and Don Watkins dispel the prevailing negative myths about finance and clearly lay out the industry's virtues within a...

MSRP:
Now:
As low as
Was:
Real-Life Discipleship explains what should happen in the life of every Christian and in every small group so that the church becomes an army of believers dedicated to seeing the world saved. With...

MSRP:
Now:
As low as
Was:
Illustrated in full color. Uncover surprises all over the Island of Sodor with Thomas the Tank Engine and his friends. The book, Surprise, Thomas! [Bulk, Wholesale, Quantity] ISBN# 9780679854463 in...

American Revolution: A Nonfiction Companion to Revolutionary War on Wednesday

Pig the Elf (Pig the Pug)

MSRP:
Now:
As low as
Was:
Santa was coming! 'Twas bigger than big! No one loves Christmas more than Pig. And the world's greediest pug will stay up all night to get his presents! When Pig yips at Santa and finds himself...

MSRP:
Now:
As low as
Was:
From the #1 "New York Times"-bestselling author of "Middle School, the Worst Years of My Life" comes a brilliantly original new comedy-adventure series that pits four globetrotting siblings (and kid...

MSRP:
Now:
As low as
Was:
A beautiful and practical book on choosing and caring for over 100 easy-to-find houseplants, as well as inspiring plant styling advice and much more. Fresh flowers are great—everyone loves...