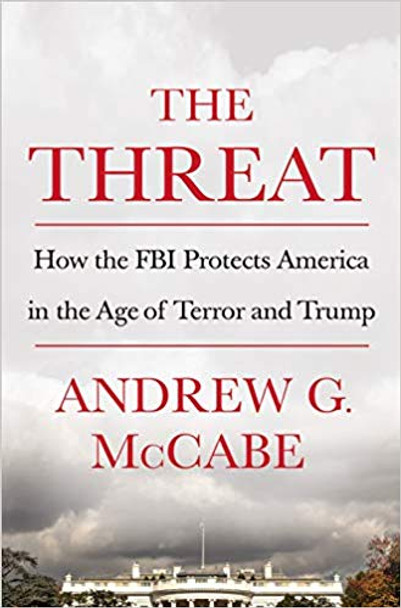 On March 16, 2018, just twenty-six hours before his scheduled retirement from the organization he had served with distinction for more than two decades, Andrew G. McCabe was fired from his position as deputy director of the FBI. President Donald Trump celebrated on Twitter: "Andrew McCabe FIRED, a great day for the hard working men and women of the FBI - A great day for Democracy." In The Threat: How the FBI Protects America in the Age of Terror and Trump, Andrew G. McCabe offers a dramatic and candid account of his career, and an impassioned defense of the FBI's agents, and of the institution's integrity and independence in protecting America and upholding our Constitution. McCabe started as a street agent in the FBI's New York field office, serving under director Louis Freeh. He became an expert in two kinds of investigations that are critical to American national security: Russian organized crime―which is inextricably linked to the Russian state―and terrorism. Under Director Robert Mueller, McCabe led the investigations of major attacks on American soil, including the Boston Marathon bombing, a plot to bomb the New York subways, and several narrowly averted bombings of aircraft. And under James Comey, McCabe was deeply involved in the controversial investigations of the Benghazi attack, the Clinton Foundation's activities, and Hillary Clinton's use of a private email server when she was secretary of state. The Threat recounts in compelling detail the time between Donald Trump's November 2016 election and McCabe's firing, set against a page-turning narrative spanning two decades when the FBI's mission shifted to a new goal: preventing terrorist attacks on Americans. But as McCabe shows, right now the greatest threat to the United States comes from within, as President Trump and his administration ignore the law, attack democratic institutions, degrade human rights, and undermine the U.S. Constitution that protects every citizen. Important, revealing, and powerfully argued, The Threat tells the true story of what the FBI is, how it works, and why it will endure as an institution of integrity that protects America.

The book, The Threat: How the FBI Protects America in the Age of Terror and Trump [Bulk, Wholesale, Quantity] ISBN# 9781250207579 in Hardcover by Andrew G. McCabe may be ordered in bulk quantities. Minimum starts at 25 copies. Availability based on publisher status and quantity being ordered.

Deep State: Trump, the Fbi, and the Rule of Law

MSRP:
Now:
As low as
Was:
From bestselling author James Stewart, the definitive story of the war between President Trump and America's principal law enforcement agencies, answering the questions that the Mueller report...

Compromised: Counterintelligence and the Threat of Donald J. Trump

MSRP:
Now:
As low as
Was:
“This is the book I have been waiting for.”—Rachel Maddow INSTANT NEW YORK TIMES BESTSELLER | The FBI veteran behind the Russia investigation draws on decades of experience hunting foreign agents...

The Threat: How the FBI Protects America in the Age of Terror and Trump

Panic Attack: Young Radicals in the Age of Trump [Hardcover]

MSRP:
Now:
As low as
Was:
Since the 2016 election, college campuses have erupted in violent protests, demands for safe spaces, and the silencing of views that activist groups find disagreeable. Who are the leaders behind...

Permission to Feel: Unlocking the Power of Emotions to Help Our Kids, Ourselves, and Our Society Thrive [Hardcover]

MSRP:
Now:
As low as
Was:
**2019 OWL AWARD HEALTH & WELLNESS CATEGORY WINNER**The mental wellbeing of children and adults is shockingly poor. Marc Brackett, author of PERMISSION TO FEEL, knows why. And he knows what we...

MSRP:
Now:
As low as
Was:
**2019 OWL AWARD WOMEN IN BUSINESS CATEGORY WINNER**Let's be honest--none of us were given an owner's manual at birth. If you're having trouble solving a problem or making a dream happen, the problem...

MSRP:
Now:
As low as
Was:
**2018 OWL AWARD CHILDREN'S LITERATURE CATEGORY WINNER**Llamaphones, Janik Coat’s much-anticipated follow-up to Hippopposites and Rhymoceros, features witty words that sound the same but are...

MSRP:
Now:
As low as
Was:
When Breath Becomes Air is a 2017 O.W.L. Award Winner in the Health category: http://awards.book-pal.com/. On the verge of completing a decade’s worth of training as a neurosurgeon, thirty-six...

When Stars Are Scattered [Hardcover]

MSRP:
Now:
As low as
Was:
Heartbreak and hope exist together in this remarkable graphic novel about growing up in a refugee camp, as told by a Somali refugee to the Newbery Honor-winning creator of Roller Girl. Omar and...