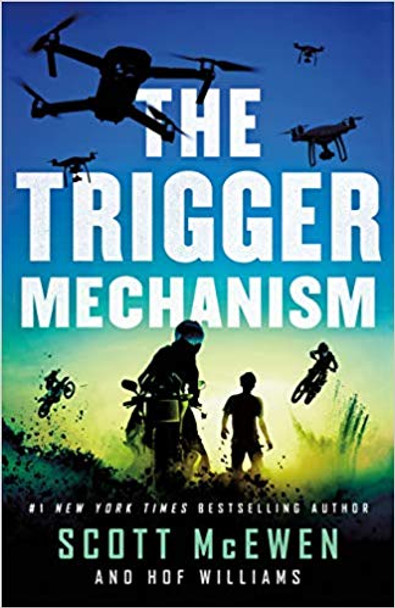 The Trigger Mechanism is the second book in the Camp Valor series by the #1 New York Times bestselling co-author of American Sniper, Scott McEwen.

When, Jalen, a young gamer, puts on a set of VR goggles and logs into an online video game, he enters a digital world where, as in most games, points are awarded for kills. Only this time, unbeknownst to Jalen, the game has been reengineered by a cyberterrorist known as Encyte so that real human lives are taken with the click of a button. When Jalen logs off, he learns he’s just killed fifty-three innocent people.

Wyatt Brewer, Camp Valor’s top camper, is tapped to investigate and see if a link exists between Encyte and The Glowworm Gaming Network, which Wyatt helped dismantle the previous summer. Wyatt is still reeling from the losses inflicted by Glowworm and by the betrayal of his mentor, Sargent Halsey. When Wyatt meets Jalen, he finds a clue, and Julie Chen, a teenage prodigy and gaming superstar known as Hi_Kyto becomes the leading suspect.

Wyatt knows he’ll need Jalen’s help if he has any chance of penetrating the gaming world and getting close to Hi_Kyto. And Jalen will need Camp Valor if he’s going to have any chance of rebuilding his life and finding redemption.

But as the summer season starts at Valor, the Department of Defense threatens to shut the secret program down. A reclusive billionaire and Camp Valor alum offers a way forward―funded by him but without Valor for protection. Jalen and Wyatt are forced to consider going out on their own if they want bring Halsey to justice and to stop Encyte.

The book, The Trigger Mechanism (Camp Valor #2) [Bulk, Wholesale, Quantity] ISBN# 9781250088253 in Paperback by Scott McEwen; Hof Williams may be ordered in bulk quantities. Minimum starts at 25 copies. Availability based on publisher status and quantity being ordered.
View AllClose

The Outpost: An Untold Story of American Valor

MSRP:
Now:
As low as
Was:
The heartbreaking and inspiring story of one of America's deadliest battles during the war in Afghanistan, acclaimed by critics everywhere as a classic. At 5:58 AM on October 3rd, 2009, Combat...

Winterborne Home for Vengeance and Valor

MSRP:
Now:
As low as
Was:
“A fast-paced thrill ride of a book . . . it’s Batman meets Annie.” —Stuart Gibbs, New York Times best-selling author of the Spy School series “An adventure-filled read with a twisty mystery and...

MSRP:
Now:
As low as
Was:
Z was just the beginning! With A to Z Mysteries® Super Editions, chapter book readers keep on collecting clues and solving mysteries with Dink, Josh, and Ruth Rose. Now with over 8 million copies in...

MSRP:
Now:
As low as
Was:
Imagination meets reality in this poetic and tender ode to childhood, illustrated by Caldecott Honor winner, John Rocco. Every year, a boy and his family go camping at Mountain Pond. Usually, they...

Surviving Hitler: A Boy in the Nazi Death Camps [Paperback]

MSRP:
Now:
As low as
Was:
Think of it as a game, Jack. Play the game right and you might outlast the Nazis." Caught up in Hitler's Final Solution to annihilate Europe's Jews, fifteen-year-old Jack Mandelbaum is torn from his...

MSRP:
Now:
As low as
Was:
Information about the world's largest animals. The book, Whales [Bulk, Wholesale, Quantity] ISBN# 9780823410309 in Paperback by Gail Gibbons may be ordered in bulk quantities. Minimum starts at 25...

MSRP:
Now:
As low as
Was:
In this unabridged version of the original 1843 edition, the classic tale is illustrated with full-color paintings and black-and-white drawings that brilliantly recapture an era and bring Dickens's...

How to Lead: Wisdom from the World's Greatest Ceos, Founders, and Game Changers

MSRP:
Now:
As low as
Was:
The essential leadership playbook. Learn the principles and guiding philosophies of Bill Gates, Jeff Bezos, Ruth Bader Ginsburg, Warren Buffet, Oprah, and many others through illuminating...

Healing the Hurt in Your Marriage: with Study Guide

MSRP:
Now:
As low as
Was:
All marriage relationships face hurts and conflicts on several levels, but not many of us know how to deal with them effectively―so we don't. Healing the Hurt in Your Marriage walks couples through a...