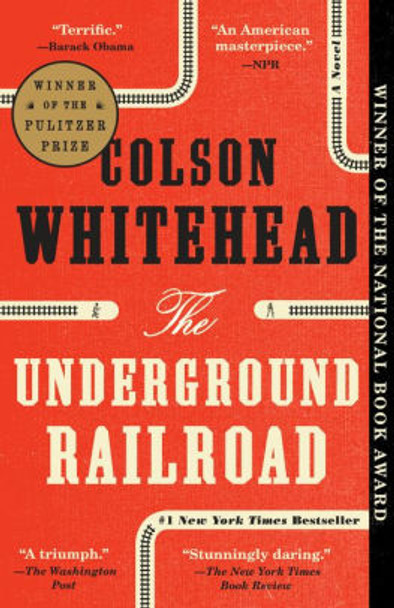 MSRP:
Now: List Price $16.95
Was:
— You save
Paperback
This product qualifies for FREE US Ground Shipping on orders over $100.

Here is the Pulitzer Prize-winning, National Book Award-winning, Oprah-anointed, #1 New York Times bestselling novel that explores America's troubled racial past as only Colson Whitehead can--and has become an instant classic. Young Cora is a slave on a cotton plantation in Georgia. Conditions are harsh for all the slaves there, but especially grim for her: an outcast even among her fellow Africans, she is coming into womanhood--where even greater pain awaits. When Caesar, a slave who has recently arrived from Virginia, tells her about the Underground Railroad, they decide to take a terrifying risk and escape.

In Whitehead's ingenious conception, the Underground Railroad is no mere metaphor: engineers and conductors operate a secret network of actual tracks and tunnels beneath the Southern soil. Unable to find a safe haven, Cora continues on a harrowing flight, state by state, seeking true freedom. As in Gulliver's Travels, she encounters different worlds at each stage of her journey--hers is an odyssey through time as well as space.

As Whitehead brilliantly re-creates the unique terrors of the antebellum era, he seamlessly weaves in the saga of America, from the brutal importation of Africans to the unfulfilled promises of the present day. The Underground Railroad is both the gripping tale of one woman's will to escape the horrors of bondage and a powerful meditation on the history we all share.

The book, The Underground Railroad [Bulk, Wholesale, Quantity] ISBN# 9780345804327 in Paperback by Colson Whitehead may be ordered in bulk quantities. Minimum starts at 25 copies. Availability based on publisher status and quantity being ordered.
View AllClose

Get on Board : The Story of the Underground Railroad

MSRP:
Now:
As low as
Was:
Born a slave, Harriet Tubman dreamed of freedom.... The book, Harriet Tubman: Conductor on the Underground Railroad [Bulk, Wholesale, Quantity] ISBN# 9780812469318 in Paperback by Petry, Ann may be...

The Drinking Gourd: A Story of the Underground Railroad

MSRP:
Now:
As low as
Was:
The stars of the Big Dipper have led a runaway slave family to Deacon Fuller's house, a stop on the Underground Railroad. Will Tommy Fuller be able to hide the runaways from a search party—or will...

What Was the Underground Railroad?

MSRP:
Now:
As low as
Was:
Illus. in full color. Cassie, who flew above New York inTar Beach, soars into the sky once more. This time, she and her brother Be Be meet a train full of people, and Be Be joins them. But the train...

Make Today Count: The Secret of Your Success Is Determined by Your Daily Agenda

MSRP:
Now:
As low as
Was:
Drawing from the text of the Business Week bestseller Today Matters , this condensed, revised edition boils down John C. Maxwell's 12 daily practices to their very essence, giving maximum impact in...

MSRP:
Now:
As low as
Was:
Decolonizing Wealth is a provocative analysis of the dysfunctional colonial dynamics at play in philanthropy and finance. Award-winning philanthropy executive Edgar Villanueva draws from the...

How to Win Friends & Influence People: The Only Book You Need to Lead You to Success [Running Press Mini Books]

MSRP:
Now:
As low as
Was:
Please note this version is small with dimensions 3 x 0.8 x 3.5 inches. Dale Carnegie's rock-solid, time-tested advice has carried countless people up the ladder of success in their business and...

MSRP:
Now:
As low as
Was:
Mercer Mayer's very popular character stars in a getting-ready-for-Christmas picture book. Little Critter approaches Christmas with the intention of being a good helper. When he makes a mistake, he...

MSRP:
Now:
As low as
Was:
Bestselling author and Sundance award-winning director Questlove offers a thrilling, music-driven ride through the last fifty years of American history​. In Music Is History, bestselling author...