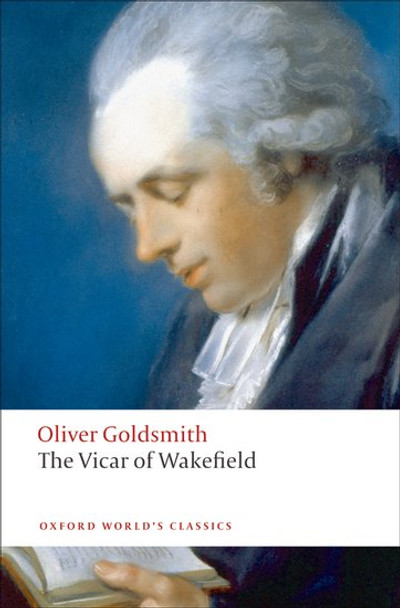 MSRP:
Now: List Price $8.95
Was:
— You save
Paperback
This product qualifies for FREE US Ground Shipping on orders over $100.

Oliver Goldsmith's hugely successful novel of 1766 remained for generations one of the most highly regarded and beloved works of eighteenth-century fiction. It depicts the fall and rise of the Primrose family, presided over by the benevolent vicar, the narrator of a fairy-tale plot of impersonation and deception, the abduction of a beautiful heroine and the machinations of an aristocratic villain. By turns comic and sentimental, the novel's popularity owes much to its recognizable depiction of domestic life and loving family relationships. New to this edition is an introduction by Robert L. Mack that examines the reasons for the novels enduring popularity, as well as the critical debates over whether it is a straightforward novel of sentiment or a satire on the social and economic inequalities of the period and the very literary conventions and morality it seems to embody. This edition also includes a new, up-to-date bibliography and expanded notes, and contains reprints of Arthur Friedman's authoritative Oxford English Novels text of the corrected first edition of 1766.

The book, The Vicar of Wakefield (Oxford World's Classics) [Bulk, Wholesale, Quantity] ISBN# 9780199537549 in Paperback by Oliver Goldsmith may be ordered in bulk quantities. Minimum starts at 25 copies. Availability based on publisher status and quantity being ordered.
View AllClose

MSRP:
Now:
As low as
Was:
One of the most influential books in the history of literature, recognized as the greatest literary masterpiece in Arabic, the Qur'an is the supreme authority and living source of all Islamic...

MSRP:
Now:
As low as
Was:
A student of Plato and a teacher of Alexander the Great, Aristotle is one of the towering figures in Western thought. A brilliant thinker with wide-ranging interests, he wrote important works in...

MSRP:
Now:
As low as
Was:
On War is one of the most important books ever written on the subject of war. Clausewitz, a Prussian officer who fought against the French during the Napoleonic Wars, sought to understand and analyze...

MSRP:
Now:
As low as
Was:
"One death, in exchange for thousands of lives - it's simple arithmetic!" A new translation of Dostoevsky's epic masterpiece, Crime and Punishment (1866). The impoverished student Raskolnikov...

MSRP:
Now:
As low as
Was:
When a young graduate returns home he is accompanied, much to his father and uncle's discomfort, by a strange friend "who doesn't acknowledge any authorities, who doesn't accept a single principle on...

MSRP:
Now:
As low as
Was:
In Giving Thanks to God, the fifth study in the Jesus Calling® Bible Study Series, you will explore what God’s Word has to say about the many ways He provides for you—and why you should give thanks...

MSRP:
Now:
As low as
Was:
In Living with God’s Courage, the sixth study in the Jesus Calling® Bible Study Series, you will discover how God calls each of His children to not only resist fear but also move through life with...