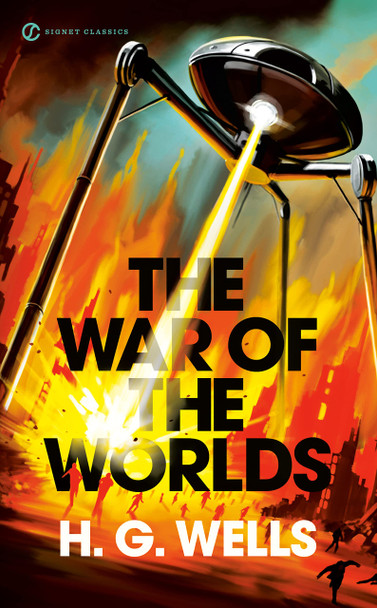 For more than one hundred years H. G. Wells’ classic science fiction tale of the Martian invasion of Earth has enthralled readers with a combination of imagination and incisive commentary on the imbalance of power that continues to be relevant today.

No one would have believed in the last years of the nineteenth century that this world was being watched keenly and closely by intelligences greater than man’s and yet as mortal as his own....

So begins The War of the Worlds, the science fiction classic that first proposed the possibility of intelligent life on other planets and has enthralled readers for generations. This compelling tale describes the Martian invasion of earth. When huge, tireless creatures land in England, complete chaos erupts. Using their fiery heat rays and crushing strength, the aliens just may succeed in silencing all opposition. Is life on earth doomed? Will mankind survive? A timeless view of a universe turned upside down, The War of the Worlds is an ingenious and imaginative look into the possibilities of the future and the secrets yet to be revealed.

The book, The War of the Worlds (Signet Classics) [Bulk, Wholesale, Quantity] ISBN# 9780451530653 in Paperback by H. G. Wells, , Karl Kroeber (Introduction), Isaac Asimov (Afterword) may be ordered in bulk quantities. Minimum starts at 25 copies. Availability based on publisher status and quantity being ordered.
View AllClose

MSRP:
Now:
As low as
Was:
Beowulf is one of the earliest extant poems in a modern European language, composed in England before the Norman Conquest. As a social document this great epic poem is invaluable—reflecting a feudal...

MSRP:
Now:
As low as
Was:
Introducing one of the most famous characters in literature, Jean Valjean—the noble peasant imprisoned for stealing a loaf of bread—Les Misérables ranks among the greatest novels of all time. In it,...

MSRP:
Now:
As low as
Was:
Originally published anonymously, The Federalist Papers first appeared in 1787 as a series of letters to New York newspapers exhorting voters to ratify the proposed Constitution of the United States...

MSRP:
Now:
As low as
Was:
In Robert A. Heinlein’s controversial Hugo Award-winning bestseller, a recruit of the future goes through the toughest boot camp in the Universe—and into battle against mankind’s most alarming enemy....

Advancing Into Analytics: From Excel to Python and R

MSRP:
Now:
As low as
Was:
Data analytics may seem daunting, but if you're an experienced Excel user, you have a unique head start. With this hands-on guide, intermediate Excel users will gain a solid understanding of...

MSRP:
Now:
As low as
Was:
Since its debut thirty years ago, this favorite by one of the world’s most beloved grief counselors has found a place in the homes and hearts of hundreds of thousands of mourners across the globe...

Kicking up Kindness: A Children's Journal of Good Deeds

MSRP:
Now:
As low as
Was:
Build good character with this journal of good deeds! It has prompts to do kind acts and then a section to write and draw what happened and the feelings that were felt. Great to do as a family,...

The Art of Southern Charm [Paperback]

MSRP:
Now:
As low as
Was:
From Patricia Altschul, breakout star of Bravo’s hit reality show Southern Charm, comes a lifestyle guide as refreshing and fun as a gin martini. “Patricia on #SouthernCharm, like lookin’ in the...

MSRP:
Now:
As low as
Was:
Sharon Flake's award-winning debut novel, repackaged with a new cover just in time for it's 20th anniversary! Maleeka suffers every day from the taunts of the other kids in her class. If they're...

Once Upon a Dream: A Twisted Tale [Paperback]

MSRP:
Now:
As low as
Was:
The 2nd installment in the New York Times best-selling A TWISTED TALE series asks: What if the sleeping beauty never woke up? It should be simple--a dragon defeated, a slumbering princess in a...

MSRP:
Now:
As low as
Was:
Rabbit lives alone. He cooks for himself, cleans up for himself, and at the end of the day, reads himself a story. It's a simple life, and he likes it. But one evening, Froggie shows up at his door...

MSRP:
Now:
As low as
Was:
A National Book Award Finalist A PEN/Faulkner Award Finalist In her fourth novel, bestselling author Emily St. John Mandel tells a story about the relationships that sustain us, the fleeting...